Dresden marchers to conquer xenophobia with #lovestorm | Germany| News and in-depth reporting from Berlin and beyond | DW | 10.01.2015

Tens of thousands of people have marched in Dresden calling for "open mindedness and humanity." DW's Kate Brady was there to see how the eastern German city took a stand against the anti-Islamization PEGIDA group. 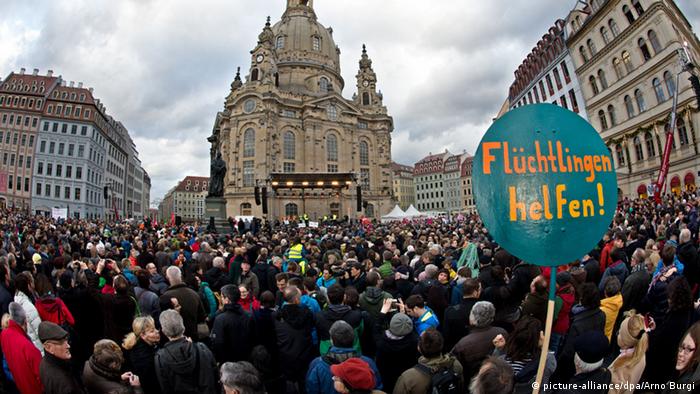 Families, young couples, pensioners and children fought against the elements on Saturday to come together in front of Dresden's Frauenkirche in condemning sentiments of xenophobia and racism that have been on the increase across many German cities in recent weeks.

Following a minute's silence on Saturday to remember the lives lost in this week's Paris terrorist attacks, Dresden Mayor Helma Orosz (CDU) took to the stage in addressing the tens of thousands of anti-PEGIDA demonstrators.

"I'm not here because I'm against people who go to PEGIDA [marches]," she said, "but because I don't fear people with a different skin color, customs or ways.

"We stand here not in protest or opposition but for all Dresden, for Saxony and for everyone who lives here," she added. "Regardless of whether you're Christian, Jewish, Hindu or Muslim - we will not be separated by hate."

Looking across Dresden's Neumarkt square, Orosz said Saturday's event was not a demonstration. It was instead a union, filled with people of all ages, all ethnicities and all religions - a union fighting to show that Germany is a "home for all."

Some of the slogans at the event resonated more than others as Dresden showed the world that they were open to all. "Everyone laughs in the same language," said one banner - something that was clear to see as at the singing and dancing city attempted to cast off its image of dark, Monday evening demonstrations. PEGIDA's most recent weekly march attracted 18,000 people and garnered international attention after stating months ago with a march of just 500 people. 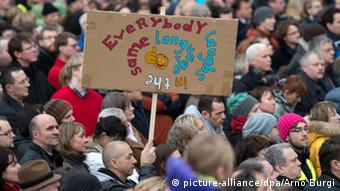 Some 35,000 people took to the streets of Dresden on Saturday

Anti-PEGIDA demonstrator and Dresden resident Steffen Mann told DW that although he supports some of the issues raised by PEGIDA, which has railed against Islam and asylum-seekers as well politicians and the media, he has a problem with the fact that the group is not clear about "the difference between Muslims and Islamists."

Referring to this week's terrorist attacks in Paris, Mann said the shootings could indeed be ammunition for many people who support movements such as PEGIDA, as they consider violent extremists to be the same as Islam.

On its Facebook page, PEGIDA wrote that the Charlie Hebdo shooting showed the "Islamists, which PEGIDA has been warning about for 12 weeks, showed in France that they are not capable of democracy but rather look to violence and death as an answer."

Following the motto of Saturday's rally of enabling "dialogue with one another," Mann also said that this was hindering attempts to find a serious solution to concerns about immigration.

"PEGIDA is not ready to sit at the table and talk about the problem," he said. 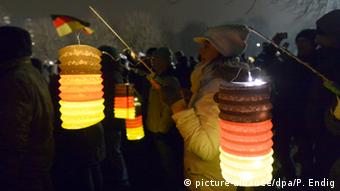 A mother of two, Susanne Krause was also among the hundreds of families who attended on Saturday and said it was Germany's responsibility to take in refugees and asylum-seekers.

"We have the possibility in Germany to help people," she told DW. "We are a very rich country…So it makes me worried when people with relatively right-wing slogans try to bring together large groups of people.”

Krause added that she believes that the problem partially lies within the state government.

"They want to portray Saxony as an open-minded state, but CDU have been in power here for 25 years, and unfortunately, they haven't achieved that," she added.

A wall different to any seen in Germany's divided past was also on display at Saturday's protest. The 10-meter structure intended to unite was part of a new social media campaign launched using the hashtag lovestorm.

"The wall of 'friendship without borders' is to show that whoever comes to Germany is very welcome," campaign leader Christoph Schott told DW. 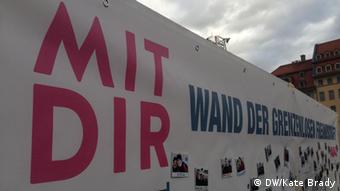 The wall of friendship without borders in Dresden

The project called on people to take a photo with a friend from another country or religion and to post it on the wall, either online or at Saturday's gathering.

"We want to show that most of Germany is not in line with what PEGIDA does," Schott said, adding that, "It's really important to set the tone of where Germany stands on such issues. In the future Germany is only going to become more diverse."

Asked how Germany should respond to an apparent increase in xenophobia through the PEGIDA movement, Schott said, “I don't think we should be fearful of it. I think we should conquer it with hope."

Although a large percentage of people at Saturday's rally expressed their doubts that the event would have an immediate impact on Monday's upcoming PEGIDA demonstration, most expressed hope for the long-term. According to the people of Dresden, hope and dialogue seem to be, at least in the short-term, the solution for the city after weeks in a negative limelight.

Tens of thousands of people have held a rally in Dresden to promote tolerance. The demonstrators marched against the anti-Islamization group PEGIDA and observed a minute of silence to remember the France attacks victims. (10.01.2015)

After an attack the French satirical magazine in Paris that killed 12 people, German politicians have warned against anti-Islam sentiment. An anti-Islamization movement in Germany sees itself justified after the attack. (08.01.2015)