After an attack the French satirical magazine in Paris that killed 12 people, German politicians have warned against anti-Islam sentiment. An anti-Islamization movement in Germany sees itself justified after the attack. 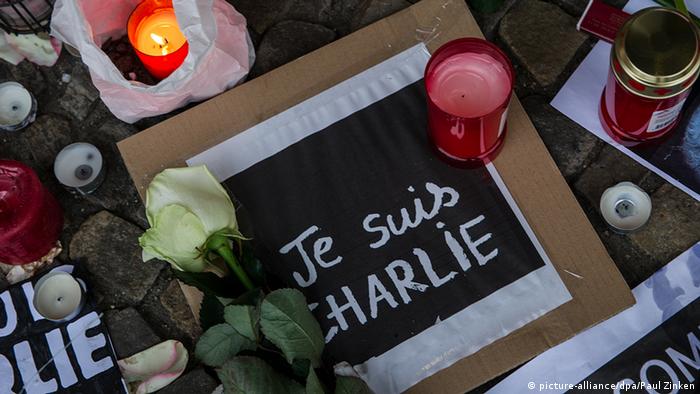 German Chancellor Angela Merkel, a conservative Christian Democrat (CDU), warned on Thursday against stereotyping Muslims living in Germany after Wednesday's attack on staff of French satirical magazine Charlie Hebdo, which is known for poking fun religion in general, including Islam, in Paris.

Merkel said there were good relations in German society to the vast majority of the country's Muslims, but that in a few, isolated cases, some had turned to extremist ideology.

"With this regard, we of course must continue to keep security high," Merkel said, adding that everything was being done to "protect people of all faiths equally as citizens of Germany and to protect them as people living in this country."

The country's minister for interior affairs Thomas de Maizière ordered flags outside of German ministries to be flown at half mast, in solidarity with the victims of the Wednesday attack, which killed 12 people.

In an interview with German daily newspaper Süddeutsche Zeitung, de Maizière (CDU) warned against "populist arsonists" in Germany and said, "Terrorist attacks have nothing to do with Islam."

The Coordinating Council of Muslims in Germany on Thursday condemned the attack on the Charlie Hebdo staff, calling it "a cowardly act." Council spokesman Erol Purlu said in Cologne that terror had no place in any religion and added: "This was not an act of revenge for our prophet. It was an act of betrayed on our religion that has disgraced our Muslim principles."

In reaction to the attack, Merkel's CDU along with police unions on Thursday pushed for stronger prevention against terrorist attacks on European soil. They brought up the contentious issue of data storage facilities, saying Germany should introduce laws to allow data to be collected on its citizens and saved for lengths of time, similar to practices in the US. 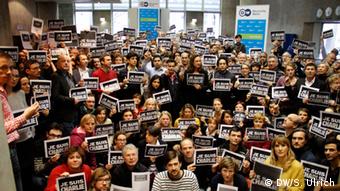 At a conference in Kreuth, northern Bavaria, the CSU demanded more surveillance for social media platforms and changes to German criminal justice laws pertaining to the financing of terrorist groupings and campaigns for such groups.

Data collection and surveillance in general is a hot topic for Germans, many of whom witnessed first hand the widespread oppression perpetrated by the former East German police state, under the guise of protecting citizens from unwanted evils.

Before the attack on Charlie Hebdo, a movement had started gaining momentum in Germany which has started to worrying politicians. The right-wing PEGIDA group - which stands for "Patriotic Europeans against the Islamization of Europe," which some label anti-Islam - started organizing demonstrations throughout Germany in October to speak out against what it calls the "Islamization" of society.

With an increase of negative headlines caused by jihadi groups in the Middle East - primarily the so-called "Islamic State" - and the plight of refugees in Syria and Iraq and a subsequent reported influx of immigrants to Europe, support for the movement has been growing.

Up to the attack in Paris, PEGIDA and similar organizations had begun to rally enough support to stage multiple demonstrations on one day per week in multiple German cities.

The highest following has been seen in Dresden, where police estimated that a record 18,000 people had turned up to the latest PEGIDA demonstration on Monday, January 5.

Counter demonstrations have been growing as well, and have had even higher turnouts in most cities so far; in Berlin, around 5,000 demonstrated against PEGIDA on Monday, compared with only several hundred PEGIDA supporters.

During a similar rally on the same day in the western city of Cologne, counter-demonstrators outnumbered PEGIDA supporters as well. Lights on the city's cathedral, which normally dominates the city's skyline, were ordered switched off by the Roman Catholic Church.

Similarly, lights on the Brandenburg Gate in Berlin were also shut off during Monday's demonstration.

Nonetheless, an opinion poll conducted by the German magazine Stern found around one-third of the population to foster anti-Islam sentiment. Another study, financed by the non-profit Bertelsmann Foundation, found that 57 percent of the population in the east of the country thought Islam posed a threat to Germany.

Warning against 'war of cultures'

German Justice Minister Heiko Maas warned on Thursday, "We must not allow a war of cultures." He also said it was deplorable that the PEGIDA movement and the conservative, right-wing parties AfD (Alternative for Germany) and NPD (National Democratic Party of Germany) were using the attacks to vindicate their xenophobic ideologies.

One of the leaders of AfD, Alexander Gauland, was heavily criticized after saying the attack in Paris justified the anti-Islamization protests. 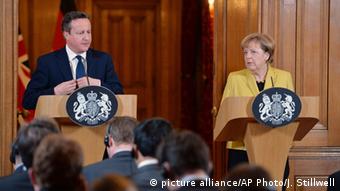 In a joint press conference on Wednesday, Merkel and David Cameron condemned the attack

Cem Özdemir, the head of Germany's Green Party and of Turkish descent, warned the public not to panic in the aftermath of the shootings.

"The situation in France is not really comparable to that in Germany," he said. "The Grande Nation is in a worse economic crisis and is more divided … (but) populists here are using PEGIDA and AfD to gain sentiment against tolerance and against openness, against European values."

Before the attack, former chancellors Helmut Schmidt and Gerhard Schröder were among the 50 well-known Germans who spoke out against PEGIDA in the first three pages of the mass-circulation "Bild" newspaper on Tuesday.

"The PEGIDA protests appeal to muffled prejudices, to the hatred of foreigners and intolerance," said 96-year-old Schmidt, a Social Democrat (SPD) chancellor from 1974 to 1982.

"Germany must remain open and tolerant. Therefore a clear 'no' to PEGIDA," he added.

Schröder, 70, also a Social Democrat, who was in office from 1998 to 2005, said it was "good that the democratic parties and the churches had taken a clear stand against PEGIDA."

Now more than ever, German leaders fear the attack in Paris will only add to the growing anti-Islamic sentiment.

As the search for two gunmen continues, the Eiffel Tower has been switched off in tribute to Wednesday's 12 victims. Charlie Hebdo has also announced that a "survivors' edition" of the magazine will be published. (08.01.2015)

The attack on satirical magazine Charlie Hebdo will not push Paris to alter its Middle East policy, a French foreign policy scholar has told DW. Instead it could lead to even closer security cooperation with Washington. (08.01.2015)