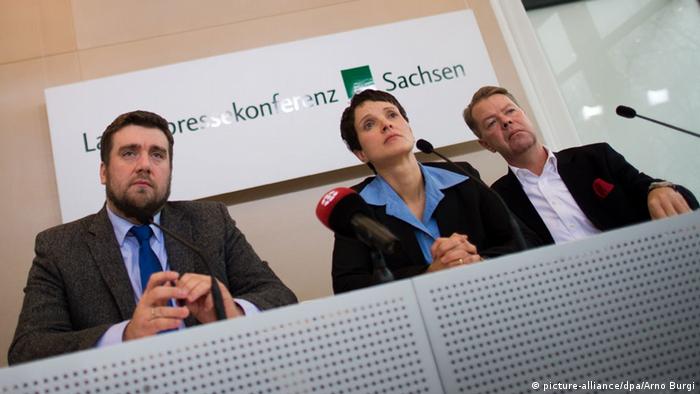 Pegida? In downtown Dresden early on Thursday morning, a young man wearing oversized glasses frowns. "They're crazy!" he said, adding that he doesn't think much of the grassroots movement "Patriotic Europeans Against the Islamization of the West" (Pegida) that has been organizing huge rallies with tens of thousands of participants to protest the purported Islamization of Germany. "It would be a shame if they received political support," the man said, referring to a meeting of Germany's right-wing political upstart Alternative for Germany (AfD) with representatives of the founders of the burgeoning anti-Islam movement in the eastern city of Dresden on Wednesday.

The idea behind the get-together was to assess any "overlap" they might have, Saxony state AfD leader Frauke Petry explained.

She told reporters after the talks, the AfD had discovered "obvious intersecting content" with Pegida, including the need for "modern immigration legislation" and more referendums in the eastern state of Saxony.

All the same, Petry stressed there will be no concrete cooperation or alliance between her party and Pegida in the near future. The euro-skeptic, populist AfD was founded less than two years ago on an anti-euro platform, currently hovers around 7 percent in opinion polls.

AfD and the Pegida movement may have sounded each other out, but they don't necessarily see eye-to-eye on the attack that took place Wednesday at the offices of the French satirical magazine Charlie Hebdo. 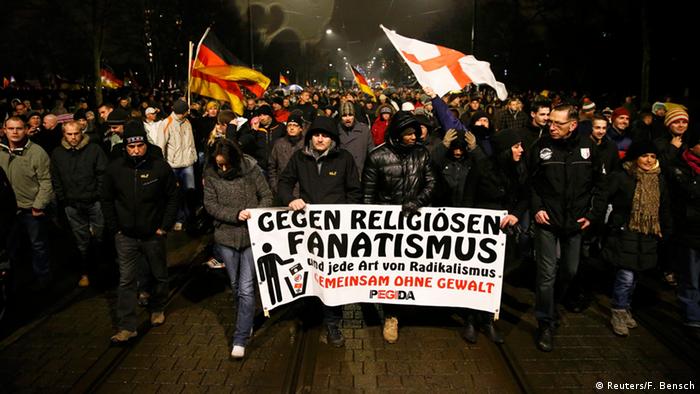 Pegida may try to capitalize on the attack. On Facebook, the group said the Islamists Pegida has been warning the public about for the past three months have now shown that they are not capable of democracy, instead resorting to violence and murder. "Our politicians want us to believe the opposite. Must such a tragedy happen in Germany, too?"

A senior AfD member provoked a storm of outrage when he declared the attack shows that Pegida protesters might be right with their warnings of an Islamization of the West. On Thursday, however, AfD chief Bernd Lucke tried to smooth the waters, urging prudence and warning against blaming what two extremists did on an entire religious community, "most of whom are peace-loving, respectable people."

One might think the AfD meeting with Pegida's organizers enhances a movement that rallies tens out thousands of citizens, but the party's Saxony leader Petry dismissed the speculation. She said the Pegida team had assured her that demagogical speeches or banners were not tolerated but that they couldn't control every single demonstrator, in particular as there are so many protesters. Some 18,000 protesters attended a March in Dresden on Monday. Other protests and anti-Pegida demonstrations, which have often had larger attendance than the Pegida marches, have taken place in cities across Germany in recent months.

Not far from the Saxon state parliament on Thursday morning, a woman with a small cart patiently stands in front of the famous Semper Opera House, hoping to sell tourists tickets for a city tour.

But Dresden is quiet on this cold winter day. Not many tourists come to the city in January, the saleswoman said with her soft Saxonian-accented voice. The lovely Baroque city on the Elbe River is just too cold and grey, she said, adding that it's not the regular Monday evening Pegida protests that keep tourists away.

"They take place at night, when the city tours are over," she said. But, she added that she's ashamed fellow citizens of Dresden take to the streets to demonstrate against other people. "It really doesn't matter whether you're Christian or Muslim: People are people."

Fanning the flames of Pegida activists

The latest terrorist attack in Paris could well provide more fuel for anti-Islam movements across Europe. So far, though, there does not seem to be an organized European network of anti-Islamists. (08.01.2015)