Anti-Islamization group PEGIDA warns that the West's future is Islamic if demographic trends continue. DW's Volker Wagener wonders whether this - and support for the euroskeptic AfD party - is just covert xenophobia. 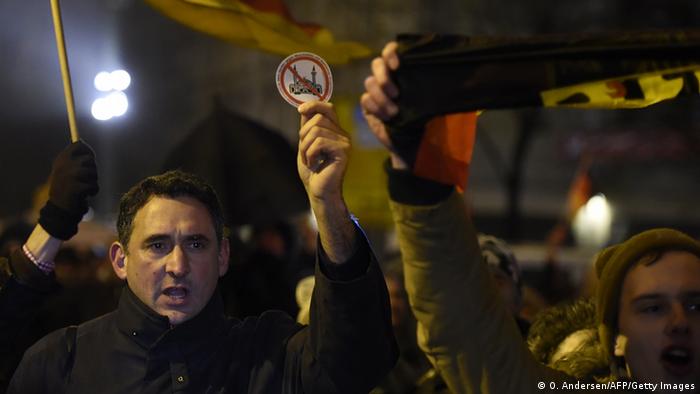 "Who's afraid of the bogeyman?" used to be a popular children's game - in the days before the invention of smartphones, back when people still watched the news on TV in the evening or read it in the morning papers.

But this analog-age game isn't dead yet. Nowadays it is played by grown-ups. Week by week, every Monday, PEGIDA - Patriotic Europeans Against the Islamization of the West - instigates demonstrations in various cities across Germany.

Thousands of worried Germans say they are afraid of Islam and make this known through ritualized protest marches. Thousands more line up against them, receiving verbal support from political leaders of almost all denominations as they denounce PEGIDA for its alleged xenophobia.

PEGIDA is polarizing Germany, and the key issue here is: Do all PEGIDA marchers deserve to be shouted down by counter-protesters and criticized by politicians? So far, the PEGIDA phenomenon defies categorization. This is where danger looms, because the issue may spiral out of political control.

Seeing Islam as the problem

The PEGIDA movement is dangerous simply because it promotes a hazy understanding of Islam. Initially, there were murderous Islamists, fanatics operating on Allah's behalf, decapitating hostages in front of rolling cameras. In the meantime, a large number of the Monday marchers condemn Islam itself.

In addition, asylum-seekers and refugees come into the mix - all of those who are, allegedly, a threat to the Western world. That is what happens when soapbox orators and their breathtakingly simple bar-room slogans - which are supposed to "save" Germany - take to the streets.

PEGIDA offers a forum for easy solutions, which is bad enough. However, if this simplified view of the world is shared by a political party represented, by now, in three German state parliaments, danger is imminent.

At least 30 percent of all Germans say PEGIDA's concerns are legitimate. Among them are many Alternative for Germany (AfD) supporters. The ongoing dispute about whether the AfD has its roots in German mainstream society or whether it is simply a xenophobic political party is about to be settled: A substantial number of members of the new party are rabble-rousers disguised as upstanding citizens.

The fact that the AfD, whose popularity surged over its euroskepticism, manages to score with a xenophobic drift in the east of Germany, of all places, only adds to the controversial nature of the issue - but this is hardly accidental.

Wheras PEGIDA provokes only lukewarm responses in the Western part of Germany, the East is clearly more receptive to a general disposition against everything non-German. When the slogan "We are the people!" resounds in the streets of Dresden today, this differs widely from the proto-democratic Leipzig chants of 1989.

This time, it suggests dissociation: "You Muslims don't belong to us, and nor do any asylum seekers or refugees!" The AfD adopts the role of PEGIDA's mentor - it is the parliamentary voice of the street, carrying street protests into German parliaments. This alliance has consequences. At the moment, the much-heralded mainstream of society is palpably drifting rightward - across generations, across education levels.

Regular observers of the Monday Dresden marches will spot, week by week, ordinary housewives, middle-class pensioners, young academics with children and neo-Nazis known to the domestic intelligence agency taking part, all united in peaceful silence. The movement's scope is what's fear-inducing: it amounts to an eastern German general protest against multicultural western Germany.

In the meantime, these protests are broadening in scope. Fears of poverty are spread by connecting low pensions to expenses brought about by support for refugees. Experiences incurred by the real and alleged losers of German reunification flare up.

It's a giant-size opportunity for all German political parties, but at present they merely speechify about their indignation. In so doing, they have all relinquished the playing field to the AfD.