Tens of thousands of people have held a rally in Dresden to promote tolerance. The demonstrators marched against the anti-Islamization group PEGIDA and observed a minute of silence to remember the France attacks victims. 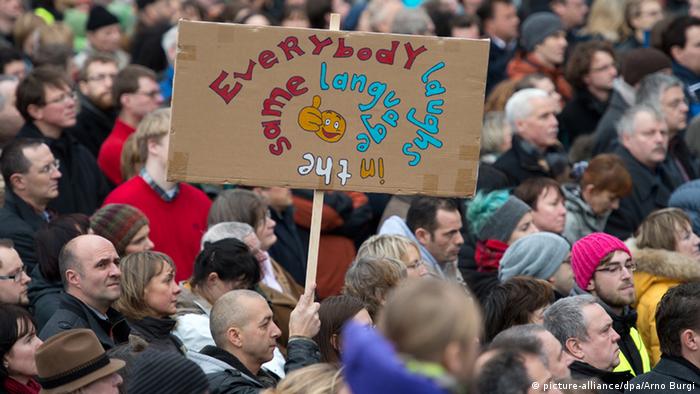 Some 35,000 people gathered in front of the Frauenkirche in the capital city of the German state of Saxony on Saturday, the rally's organizers said.

The rally is being held to show solidarity with the immigrants and in defiance of the PEGIDA (Patriotic Europeans against the Islamization of the West) movement, which organizes weekly protests against the purported "Islamization" of Europe in different German cities. Last Monday, some 18,000 people took part in PEGIDA's Dresden demonstration.

Saxony's Premier Stanislaw Tillich and Dresden Mayor Helma Orosz - both members of the governing Christian Democratic Union - urged the people to take a stand against PEGIDA.

There is concern that the terrorist attacks by Islamists in France, which claimed the lives of 12 people at the satirical magazine Charlie Hebdo in Paris on Wednesday as well as at four hostages at a kosher supermarket on Friday, would fuel anti-Islam feelings in Germany and benefit PEGIDA.

On Saturday, the Dresden rally began with a minute of silence in memory of all victims of this week's terrorist violence in France. Police said the event was peaceful.

"I did not come to this rally because I am against those who go to PEGIDA's events, but because I am not afraid of people who have a different skin color, manners and customs," Orosz said in her opening speech. She insisted Dresden was "more than a place where people hold demonstrations against other religions week after week."

The secular marchers were carrying posters and banners with slogans such as "Everyone laughs in the same language" and "Germany is for all."

"The pictures and the news coming out from Dresden in recent weeks do not reflect the image of this city," said pop singer Roland Kaiser, who was among the rally participants.

"The time of finding scapegoats should belong to the past now," Kaiser said.