Matchday seven of the German Bundesliga: a win for Bayern Munich, tough losses for Dortmund and Schalke, Paderborn hanging with the big boys, and Bremen and Freiburg can't find a win. 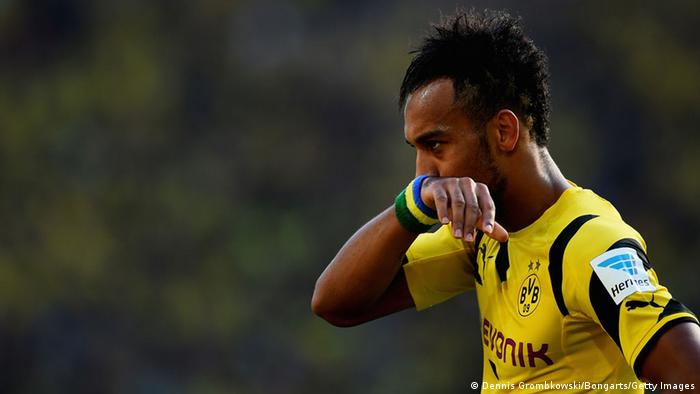 Earlier in the week, Borussia Dortmund beat Anderlecht 3-0 in a Champions League group match to keep that campaign on track, but on Saturday against Hamburg their search for good form in the Bundesliga remained elusive.

Poor defending allowed Nicolai Müller to run clean through and when he was challenged by keeper Roman Weidenfeller, Müller passed off to Pierre-Michel Lasogga to finish and put Hamburg ahead 1-0.

Despite a late surge, Dortmund were unable to recreate any of their Champions League brilliance and have now played four Bundesliga matches in a row without a win. The result leaves them in 13th place in the table, trailing Bayern Munich by ten points.

Lewandowski and Robben down Hannover

As road trips in the Bundesliga go, Hannover to Munich is one of the longest ones there is. After traveling all that way, Hannover must have been disappointed that any hopes of an upset over Bayern Munich were dashed well before the end of the first half. 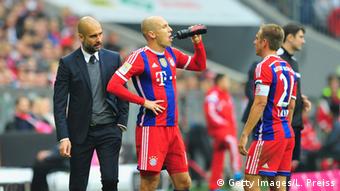 It proved an afternoon of leisure for Pep Guardiola's men

Robert Lewandowski struck first for Bayern after six minutes, scoring the club's earliest Bundesliga goal of the season. Arjen Robben, who looked fantastic all match, added a second in the 13th minute. Seven minutes before the half, Lewandowski added his second goal of the game - finishing past Zieler after fantastic close control.

The second half was a much more relaxed affair, with Bayern possibly turning their thoughts to a planned team visit to Munich's Oktoberfest on Sunday. Robben added his second and Bayern's fourth to seal the game. Hannover left Munich without cause to celebrate, but knowing it's five long months before their next tie with Bayern Munich may offer some consolation.

Schalke are another team having trouble finding their rhythm in the Bundesliga, and their woes continued on Saturday on the road against Hoffenheim. Before thirty minutes had ticked off the clock, Jens Keller's men found themselves trailing 2-0 thanks to goals from Tarik Elyounoussi (13th minute) and Adam Szalai (29th minute). 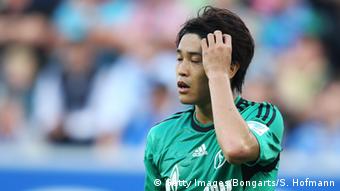 There is plenty of head-scratching going on at Schalke

Klaas-Jan Huntelaar got one back for Schalke in the 83rd minute, but the guests left it too late to find an equalizer.

Schalke will be without Joel Matip next week against Hertha Berlin after he saw two yellow cards in five minutes and was sent off. It was Schalke's third dismissal of the current season, more than any other Bundesliga team.

From seven matches, Schalke have eight points and are in 11th.

Bayer Leverkusen were the latest victim of a Paderborn side that is consistently punching above their weight. The team was promoted last year and has managed to pick up points in all but two of their matches. Their 2-2 draw against Leverkusen was a particularly appealing coup, showing their side is one to be taken seriously in the league. 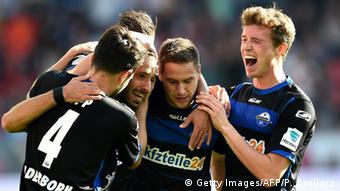 Paderborn are all smiles so far this season

Süleyman Koc took advantage of a mistake by Leverkusen keeper Bernd Leno in the 20th minute to put the guests ahead, before captain Lars Bender equalized just before the half for the home side. Late in the game, after Paderborn's Marvin Bakalorz saw a red card, the 10 men turned the tables on Leverkusen and went ahead 2-1 after a superb solo effort from Moritz Stoppelkamp with just three minutes left. Karim Bellarabi salvaged a point for Leverkusen three minutes later though, leaving final score at 2-2.

Paderborn are currently in the top half of the table and look comfortable playing in Germany's first division.

In perhaps the most entertaining game of the Saturday, Eintracht Frankfurt saw off Cologne 3-2 in an end-to-end encounter. The visitors, in need of more attacking verve, took the lead thanks to Marcel Risse's fine effort, but just before the break Haris Seferovic crossed for Alex Meier and the striker leveled the scores.

That goal proved key as Frankfurt came out in the more positive mood, which led to their second goal - with Seferovic once again finding Meier. Cologne rallied though and their impressive left back Jonas Hector latched onto a long ball from Kevin Vogt before rifling home to make it 2-2.

Both sides pushed for the win and in the end, a corner from Bastian Oczipka was inadvertently pushed across the line by Cologne's Kevin Wimmer. An own goal was a cruel way to lose for Cologne, who finally appeared to come out of their shell. For Frankfurt, the win sends them into the top six.

No winner in Bremen

Freiburg's Vladimir Darida's early penalty in the 8th minute was cancelled out by Bremen's Franco Di Santo on the half-hour mark in a game neither side took control of.

The 1-1 draw leaves Bremen and Freiburg as the only two teams left in the league without a win, and puts Bremen bottom of the table after HSV's surprise win in Dortmund.

For a recap of Bundesliga matchday seven as it happened, check out our archived live blog below:

Matchday seven showed further signs of weariness in both Borussia Dortmund and Schalke's teams. Why is the fire going out in these top sides' camps? (04.10.2014)