US President Donald Trump has used his speech in South Korea to warn the North that its weapons program was putting it in "grave danger." Trump was earlier forced to cancel plans to visit the DMZ due to adverse weather. 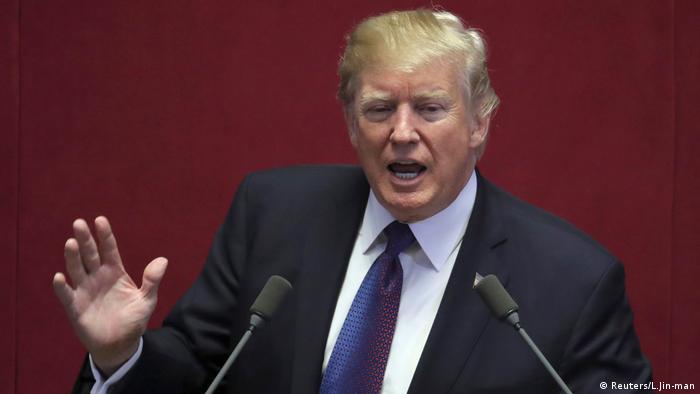 US President Donald Trump on Wednesday issued a stern warning to the North Korean regime, saying that the US would not seek confrontation but would not run away from it either.

"Today, I hope I speak not only for our countries, but for all civilized nations, when I say to the North: 'Do not underestimate us,'" he said. "And do not try us. We will defend our common security, our shared prosperity, and our sacred liberty."

Speaking before lawmakers at South Korea's National Assembly, Trump called on all nations to come together to isolate the North Korean regime under Kim Jong Un and "deny it any form of support, supply, or acceptance."

A change in tone?

Trump's remarks come on the back of a summer of soaring tensions between the US and North Korea. The North's decision to carry out a series of ballistic missile tests despite international condemnation led Trump to respond with stinging remarks directed at the Kim regime, as well as threats of "fire and fury."

On Wednesday, however, the president adopted an altogether more thoughtful tone in his address before the National Assembly in Seoul. "Despite every crime you have committed against god and man," Trump said, "we will offer a path towards a much better future."

But that future would require the North to disarm itself of its nuclear arsenal, something the regime has repeatedly rejected.

As he wrapped up his two-day tour of South Korea, Trump turned the focus to his next target, Beijing. He singled out China and Russia to clamp down on trade with North Korea and fully enact sanctions.

"To those nations that choose to ignore this threat or, worse still, to enable it, the weight of this crisis is on your conscience," he said before his flight to China.

He will meet with Chinese President Xi Jinping in Beijing and with Russian President Vladimir Putin later on in Vietnam as part of his 11-day tour of Asia.

The president's speech came just hours after he was forced to abandon plans to visit the Korean demilitarized zone that separates the North and South. The presidential Marine One helicopter departed from Seoul at daybreak and flew to within five minutes of the DMZ, before it was forced to turn back due to heavy fog.

Administration officials had initially said that the president would not be visiting the DMZ as there was not enough time in his schedule. However, White House press secretary Sarah Huckabee Sanders admitted that the trip had indeed been planned months ahead and was kept secret for security purposes.

"I think he's pretty frustrated," she told reporters. "It was obviously something he wanted to do."

Read more: The Korean Divide - Inside the DMZ

Trips by American presidents to the DMZ have become common during US state visits to South Korea. All presidents since Ronald Reagan, bar George H.W. Bush, have made the trip to peer upon the barren north through a pair of binoculars and reaffirm the US' longstanding commitment to the South.

Trump and First Lady Melania Trump instead paid their respects at Seoul National Cemetery, which is reserved for Korean soldiers who lost their lives in the Korean independence war, Korean War and Vietnam War.