The US president's overture to talk with Iran's President Hassan Rouhani was met by calls from Iran for the US to return to the 2015 nuclear deal. It follows escalating rhetoric and threats of war between the countries. 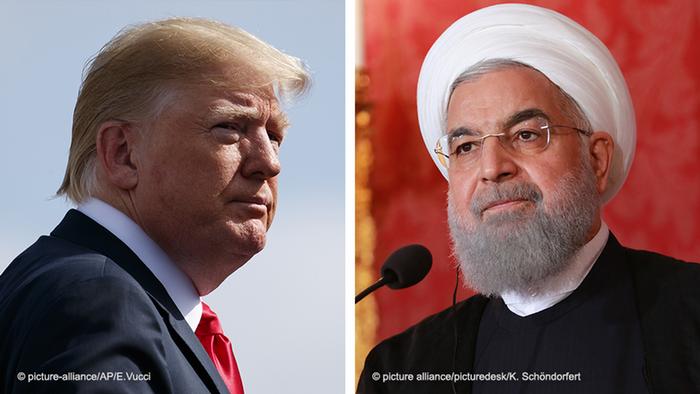 US President Donald Trump said Monday that he would meet with Iran's leadership without preconditions, only to be contradicted by the White House and his top diplomat hours later.

"I would certainly meet with Iran if they wanted to meet. I don't know that they are ready yet. They are having a hard time right now," Trump said during a news conference with Italy's prime minister. "I'll meet with anybody," Trump said. "There's nothing wrong with meeting."

"I do believe they will probably end up wanting to meet. I'm ready to meet anytime they want to," he said, adding that he would do so without preconditions.

The comments came as Washington prepares to impose what it describes as crushing sanctions on Tehran following Trump's decision earlier this year to unilaterally withdrawal the United States from the 2015 nuclear deal between Iran and six major powers. The deal was made in response to fears that Iran was developing an atomic bomb.

The first sanctions go back into effect in August, followed by ones on Iran's energy sector in November.

Trump's decision has created a growing gap between the United States and its European allies who are now trying to save the nuclear deal that the UN and non-proliferation experts say is robust and working.

"If the Iranians demonstrate a commitment to make fundamental changes in how they treat their own people, reduce their maligned behavior, can agree that it's worthwhile to enter in a nuclear agreement that actually prevents proliferation, then the president said he's prepared to sit down and have a conversation with him," Pompeo said on CNBC.

In May, Pompeo unveiled the United States' Iran strategy, saying that Washington would not try to renegotiate the nuclear accord. Instead, any new deal would require Iran to meet 12 demands, including halting its ballistic missile program and ending its regional role in conflicts in the Middle East, including in Syria and Yemen.

Analysts say the United States is trying to instigate internal upheaval in Iran with a goal of regime change.

White House National Security Council spokesman Garrett Marquis said Trump was open to dialogue and lifting sanctions only "if there are tangible, demonstrated and sustained shifts in Tehran's policies."

"Until then, the sting of sanctions will only grow more painful if the regime does not change course," he said.

In response to Trump's overture, Iran said the United States should return to the nuclear deal it exited in May if it wants to talk.

"Respecting the Iranian nation's rights, reducing hostilities and returning to the nuclear deal are steps that can be taken to pave the bumpy road of talks between Iran and America," Hamid Aboutalebi, an adviser to Rouhani, tweeted on Tuesday.

The conflicting messages from the Trump administration come as Iran and the United States have ratcheted up a bitter war of word in recent weeks amid heightened tensions in the Middle East.

Rouhani last week warned the United States that Trump should "not play with the lion's tail."

"To Iranian President Rouhani: NEVER, EVER THREATEN THE UNITED STATES AGAIN OR YOU WILL SUFFER CONSEQUENCES THE LIKES OF WHICH FEW THROUGHOUT HISTORY HAVE EVER SUFFERED BEFORE. WE ARE NO LONGER A COUNTRY THAT WILL STAND FOR YOUR DEMENTED WORDS OF VIOLENCE & DEATH. BE CAUTIOUS!" he wrote.

In response to Trump's Twitter threats, Iranian Foreign Minister Mohammad Javad Zarif fired back with his own Twitter message that began, "COLOR US UNIMPRESSED."

"We are near you, where you can't even imagine. We are the nation of martyrdom," said Major General Qassem Soleimani. "You are aware of our power in the region and capability for [launching] asymmetrical war?"

Art of the deal?

Trump has portrayed himself as a master dealmaker who can hold one-on-one meetings with the United States' rivals and enemies, highlighted by recent talks with Russian President Vladimir Putin and North Korean strongman Kim Jong Un.

The alliance would serve as a bulwark against Iran. The Shiite state has been the focus of the US president's threats, and a travel ban has seen US visa approvals for Iranians plummet. (29.07.2018)

In the wake of the US-North Korea summit, South Korean democrats are meeting to discuss the future of defense whereas conservatives are calling the outcome a one-sided victory for Pyongyang. Fabian Kretschmer reports. (13.06.2018)

Amid a heated exchange of words between US President Trump and Iranian President Rouhani, DW spoke with prominent Iranian analyst Sadegh Zibakalam about the changing political situation in Iran. (23.07.2018)