US President Donald Trump has used a speech in Warsaw to reiterate US support for the NATO alliance. He praised Poland for its commitment to defense spending, but chastised Russia over its actions in Ukraine and Syria. 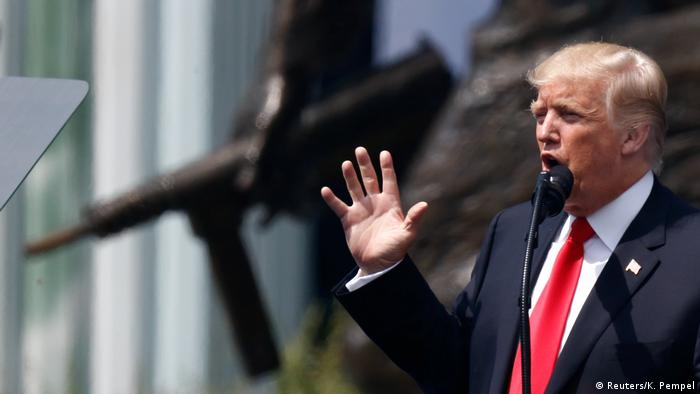 In his speech at Krasinski Square on Thursday, US President Donald Trump had praised Poland for honoring its defense spending commitments.

Poland is one of only four European countries that spends at least 2 percent of its gross domestic product on the military, a commitment that Trump has said he wants all NATO allies to honor. Trump's comments came after listing a string of moments of Polish resistance, against both the Nazis and Soviet Russia.

"Now among the most committed members of the NATO alliance, Poland has resumed its place as a leading nation of a Europe that is strong, whole and free," Trump, who stood behind a bulletproof glass screen, told an appreciative crowd.

"One hundred years after the entry of American forces into World War One, the transatlantic bond between the United States and Europe is as strong as ever, and maybe in many ways even stronger," said Trump, who was speaking at the memorial to the 1944 Warsaw Uprising against the Nazis.

Trump went on to spell out a number of threats to the West, particularly extreme Islamism.

However, he also said the West was "confronted by powers that seek to test our will, undermine our confidence, and challenge our interests," before criticizing Russia for its actions in Ukraine and support for Syria's government.

"We urge Russia to cease its destabilizing activities in Ukraine and elsewhere and its support for hostile regimes including Syria and Iran and to instead join the community of responsible nations in the fight against common enemies in the defense of civilization itself."

'Past time' for some allies

Earlier, at what was the US president's first overseas news conference, following talks with Polish President Andrzej Duda in Warsaw, Trump had echoed his previous criticism of some countries in the alliance by saying it was "past time" for all alliance members to "get going on their financial obligations."

He also commended Poland for its contribution to helping defeat the "Islamic State" group by training Iraqi special forces and conducting reconnaissance missions.

Trump touched on the current escalation in the international standoff with North Korea after the communist state tested an intercontinental ballistic missile on July 4. Trump said the US was thinking some pretty "severe things" about North Korea, and called on countries to confront North Korea's "very, very bad behavior."

He said there would be consequences for the missile launch, but added that "we'll take a look at what happens over the coming weeks and months."

Duda praised Trump for "thinking very seriously" about Polish security, and stressed the need for greater transatlantic security and energy cooperation. He also called for long-term deliveries of liquefied natural gas to Poland as it seeks to break its reliance on supplies from Russia.

Ahead of the talks, Duda had said Trump's visit boosted Poland's status in the European Union.

"This is the second foreign visit by President Trump, and it starts in Poland. This shows we are a country that matters, and it strengthens our position in the European Union," Duda said on public radio Thursday morning.

Poland has come in for considerable criticism from the EU in recent times over what the bloc sees as unlawful interventions in the powers of the Constitutional Court, and Warsaw's harsh stance on refugees, among other things.

The US president was also to meet the leaders of 12 Eastern European countries attending the Three Seas Conference, a meeting of the nations bordering the Adriatic, Baltic and Black seas.

Trump arrived in Warsaw late on Wednesday on what is his second foreign trip as president.

His less than 24-hour sojourn in Poland will be followed by a trip to the northern German city of Hamburg for his first G20 summit on Friday and Saturday. His reception there is likely to be less warm, with memories of an acrimonious G7 summit on his first trip overseas in May still very much present in the minds of world leaders.

Trump's trip to Warsaw coincided with Poland's announcement that the USA had agreed to sell it Patriot missile defense systems in a memorandum signed Wednesday night.

"A memorandum was signed tonight that the US government has agreed to sell Poland Patriot missiles in the most modern configuration," Polish Defense Minister Antoni Macierewicz said in a news conference broadcast on public television Thursday morning.

Warsaw sees the deal as key to a modernization of its armed forces by 2023.

Representatives from Ukraine, Poland, Georgia, Latvia, Lithuania and Estonia have urged the US to keep sanctions against Russia in place. They also asked for more military support from Washington. (08.03.2017)

The G20 summit is attracting a panoply of protests - even before US President Donald Trump's first appearance in Germany. DW breaks down the main demos on the streets and waters of Hamburg. (07.07.2017)