Representatives from Ukraine, Poland, Georgia, Latvia, Lithuania and Estonia have urged the US to keep sanctions against Russia in place. They also asked for more military support from Washington. 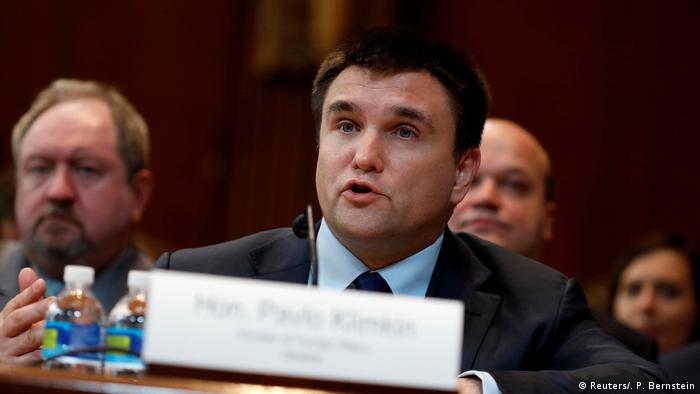 Diplomats from six Eastern European countries met with US senators on Tuesday to ask for an extension of the US sanctions against Russia and to ask for assistance in combating Moscow interferences, including cyber attacks.

"Until Russia gets off Ukrainian land, there should be no easing up of sanctions. If anything, they should be increased," Ukrainian Foreign Minister Pavlo Klimkin told the Senate subcommittee overseeing the State Department and foreign aid.

Along with ambassadors from Poland, Georgia, Latvia, Lithuania and Estonia, Klimkin spoke to the subcommittee about the Kremlin's activities in their countries.

The minister said that Moscow's behavior toward Ukraine could be summed up in one word - "war." Ukraine is "on the front lines," he said. 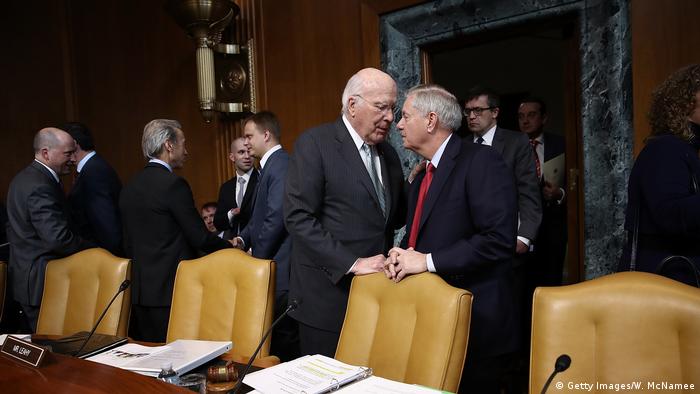 Lindsay Graham (front, right) had invited the six diplomats from Eastern Europe to speak at the subcommittee hearing

The diplomats accused Russia of using "hybrid warfare," by engaging in cyber attacks and propaganda along with the threat or use of force. They asked in particular for military assistance, including weapons, saying that it would be most useful type of aid the US could provide to their countries.

Members of congressional appropriations committees – including the subcommittees – will soon draft the budget for the coming year. The Trump administration has indicated that it would like to significantly cut foreign aid. While Congress has the final say over the federal budget, the federal administration has significant leeway in deciding how or whether to spend the money. Military spending for countries such as Israel or Ukraine makes up a significant part of US foreign aid.

Republican Senator Lindsey Graham indicated that he supported continued aid, calling it important to US security. "The safer you are, the safer we will be," he said. As chairman of the foreign operations appropriation subcommittee, Graham had initiated the hearing.

On Tuesday, Graham said he while he wanted better ties with Russia, this could not happen until Moscow changed its practice "of trying to grind democracy into the ground."

Republican Marco Rubio, also a member of the subcommittee, tweeted that Ukraine was "America’s good friend" and "strong ally", along with a picture of a meeting with Klimkin.

The event put pressure on Donald Trump to keep in place the sanctions the US imposed against the Kremlin after the annexation of Crimea in 2014 and Russia's involvement in the conflict in Eastern Ukraine. The new president's repeated praise for Russian President Vladimir Putin, along with his criticism of NATO, have made some countries, particularly in Eastern Europe, uneasy.

Ahead of the subcommittee meeting on Tuesday, Graham met for lunch with Trump, while Pavlo Klimkin met with Secretary of State Rex Tillerson.

White House national security adviser Michael Flynn has resigned from his position over his contact with the Russian ambassador to the US. He reportedly misled officials on whether he discussed sanctions with the envoy. (14.02.2017)

Lindsey Graham is a leading foreign-policy legislator and an ardent supporter of a more interventionist stance. On domestic issues he is conservative, but unlike many of his colleagues open to compromise. (13.10.2015)

After 20 years, words are put into action: American soldiers are coming to Poland for the long term, while German and British troops head to the Baltics. Polish officials will celebrate the Americans' arrival Saturday. (13.01.2017)

Graham subsequently told the eastern European diplomats that he expected the new president would be a good ally.

Klimkin said that told senators that Tillerson had assured him that the Trump administration would support Kiev in its standoff with Moscow.

Lindsay Graham has been one of the most vocal critics of Donald Trump within the Republican Party concerning US-Russia-relations.

Graham is part of a bipartisan group of senators that is pushing for legislation that would require the president to get approval from Congress before easing sanctions against Moscow. The group also includes prominent Republicans John McCain and Marco Rubio.

After Trump's victory in November, Graham pledged to use his position in the Republican majority to investigate what he called "Russia's misadventures throughout the world."

And as the head of the Senate judiciary subcommittee on crime and terrorism, Graham pushed an inquiry into Russia's alleged attempts to influence elections in the US and other countries.

US intelligence agencies allege the Kremlin interfered in the 2016 presidential election in Trump's favor. Several members of the Trump administration allegedly had contact with Russian officials during his campaign, leading to the resignation of his national security adviser.