Ukraine v. Russia: A potential game-changing lawsuit comes before the ICJ | World | Breaking news and perspectives from around the globe | DW | 05.03.2017

Hearings have begun at the International Court of Justice (ICJ) in Ukraine's suit against Russia. Kyiv claims Moscow employed terrorism in its Donbass region and has mistreated Crimea's minorities. 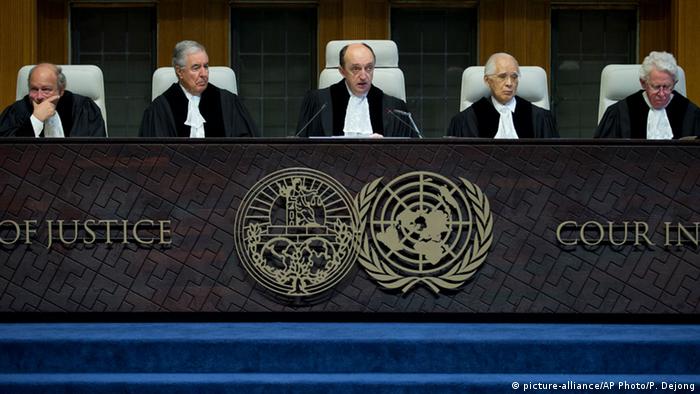 Rebels in eastern Ukraine have seized control of 40 factories and coal mines. They also took over a major aid distribution center. (01.03.2017)

The case in the Hague could go down as one of the most spectacular in years. On Monday, the International Court of Justice (ICJ) held its first hearings in a suit Ukraine has brought against Russia. The opposing parties will initially each get four days of divided hearings at the highest international court.

UN and OSCE reporting as evidence

The detailed 45-page indictment outlines alleged violations of two UN conventions.  To begin with, the Ukrainian government is accusing Russia of violating the Terrorist Financing Treaty through its support of "illegally armed groups" in the self-proclaimed Donetsk People's Republic and Luhansk People's Republic. Russia denies this.

The second part of the claim covers the alleged mistreatment of Crimea's Tartar and ethnic Ukrainian populations when Russia annexed the area in March 2014. In allegedly imprisoning people and by banning the Majlis of the Crimean Tatar People – its representative body -  Russia is accused of violating the International Convention on the Elimination of All Forms of Racial Discrimination (CERD). Ukraine cites UN and OSCE reports from the region, as well as NATO satellite imagery as evidence. The suit calls upon the court to hold Russia to account for its crimes, including the downing of MH17 and firing on civilians. Reparations are demanded. 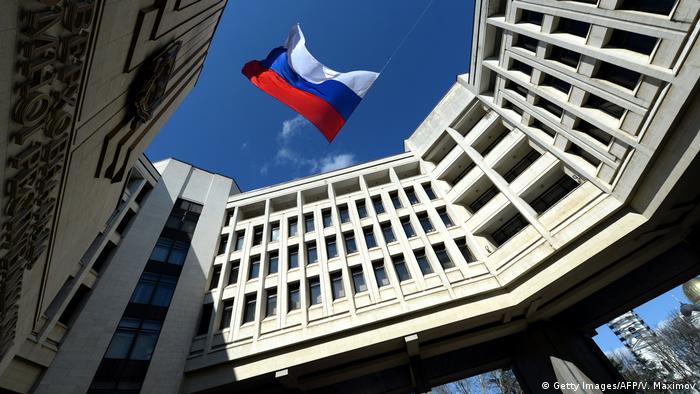 A Russian flag flies in the courtyard of the parliament building in Simferopol, Crimea.

The lawsuit was filed in January 2017, almost three years after the events in the claim began. Ukraine has filed claims in other international courts, but chances of success are more limited. The International Criminal Court (ICC), also based in the Hague, was established for handling war crimes. Russian President Vladimir Putin announced in 2016 that his country would not be part of the Rome Statute that governs the ICC, which Russia had signed, but not ratified. Ukraine has not ratified it either, but it granted the ICC limited power to investigate in 2013, which the court is currently doing. Since 2014, Ukraine has filed five suits at the European Court of Human Rights (ECHR), with a sixth being prepared. Russia's Supreme Court declared it would have the final word on any ECHR ruling.

The situation is different with the ICJ. Founded in 1945, Russia fully recognizes its authority and, as a permanent member of the UN Security Council, reserves the right to appoint a Russian to serve as one of the court's 15 judges. Ukraine can call for an ad hoc judge to participate specifically in this proceeding.

The ICJ heard a case that Georgia brought against Russia for the 2008 war in Georgia's South Ossetia region, and it was "highly controversial," former ICJ judge Bruno Simma told DW. He served on the court from 2003-2012. As Ukraine is doing now, Georgia used CERD as the basis for its suit. By just one vote, the court granted an "interim injunction," calling on both sides to cease violations. Later, the court sided with Russia and dismissed the case on the grounds that it lacked jurisdiction.

The court could rule the same way this time, Simma said. It is "always difficult to deal with cases of war involving major powers." In the claim of persecution of minorities, CERD contains a provision calling for "serious negotiations" between the parties in advance of bringing a case to the ICJ. Unlike the conflict in Donbass, this has not taken place regarding Crimea.

Court proceedings could last up to three years, Simma said. "An interim injunction could come in April, followed by a decision on jurisdiction a year later. Then, the decision itself could be handed down a year and a half after that." Ukraine's chances of success are not nil, he said. An interim injunction on its own would be a "success for Ukraine." 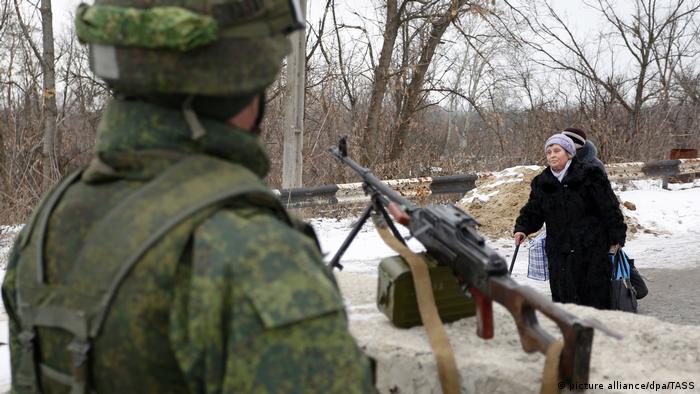 The only active checkpoint for civilians to cross the border between Ukraine and the Lugansk People's Republic.

It was 30 years ago that the ICJ ruled the US had violated human rights by supporting the Contras in Nicaragua. The ICJ decided that the US had breached international law. "The US didn't have to pay any fines," explained Simma "but it was a huge publicity coup for a the small country of Nicaragua." The case also garnered support for the ICJ as an independent UN institution.

But Simma declined to offer a prediction on Ukraine's chances of a similar result. He said, "It's a complicated situation."