During talks with the US president, Austrian Chancellor Sebastian Kurz said he wanted to prevent an escalation in the trade war between the US and the EU. However, Trump said he isn't taking car tariffs off the table. 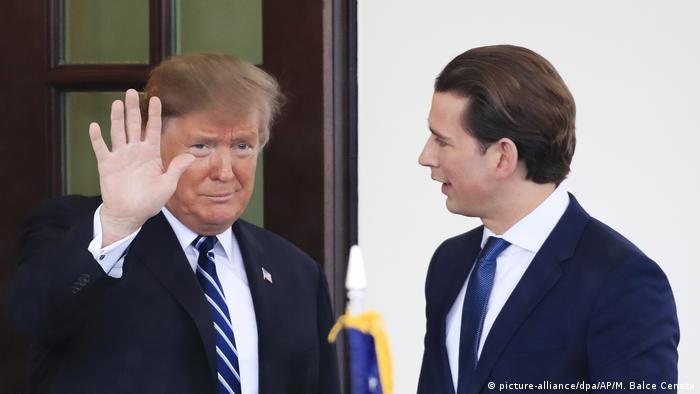 US President Donald Trump has said that he may impose tariffs on cars and auto parts imported from the European Union if Washington is unable to make a trade deal with Brussels.

The comments came during a meeting with Austrian Chancellor Sebastian Kurz on Wednesday at the White House.

"We are negotiating with them. If we don't make the deal, we will do the tariffs," Trump told reporters. "[The EU has] been very difficult over a period of time, over many, many years."

Trump is currently reviewing a report from the US Department of Commerce on whether or not imported vehicles and parts pose a threat to US national security. The department's findings have not yet been made public.

Kurz said he wanted to advance trade negotiations during his talks with the US leader and to ensure that the trade war between the EU and the US "does not gain momentum."

Austria's suppliers to German carmakers would likely suffer greatly from the tariffs — a fate Kurz is hoping to avoid.

"As a small country, we need international cooperation," he said.

Although Trump said the US and Austria have a "great trade relationship," he criticized the US trade deficit with the EU, saying that Brussels is "very tough to make a deal with."

The two leaders did not appear to see eye-to-eye on trade, but Kurz praised Trump's pro-Israel stance, his diplomacy with North Korea as well as his pressure on European NATO members to increase military spending.

Trump, in turn, praised Austria as a "beautiful" country and joked with Kurz about his age, telling the 32-year-old that he is "a very young guy."

Read more: No more BMWs or Mercs on Fifth Avenue?

Trump has threatened to levy tariffs on car imports from the EU in a bid to pressure the 28-member bloc to grant better access for US products. The US imported $340 billion (€300 billion) in cars, trucks and auto parts in 2017.

Although US carmakers would benefit from the import tax on their European competitors, the move would also likely put their businesses at risk.

Many US carmakers depend on imported parts that would be subject to Trump's tariffs, making them more expensive. The companies could also be subject to retaliatory tariffs, as well.

The Trump administration has already imposed tariffs on imported steel and aluminum, as well as hundreds of Chinese products.

The EU has slammed US President Donald Trump's plans to raise tariffs of up to 25 percent on imported cars. 'A solution in search of a problem' is how EU trade commissioner Cecilia Malmstrom put it. (20.07.2018)

US President Donald Trump gave his "word" to the EU Commission head that he would hold off on tariffs on EU cars, Juncker told German media. Representatives of US car makers warned a tariff hike would backfire. (19.02.2019)