Austria takes over the EU Council presidency on July 1. Its conservative new leader Sebastian Kurz sees himself above all as a gatekeeper, with migration at the top of the agenda for his country's mandate. 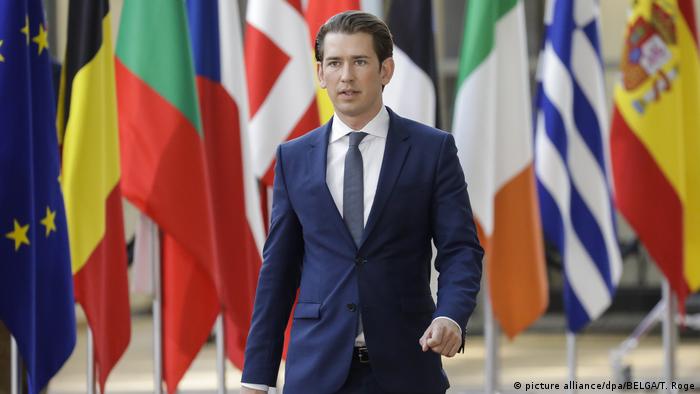 The dispute over a common EU migration policy is far from resolved. In Germany, Chancellor Angela Merkel's coalition has been teetering on the brink of collapse over the issue. The Visegrad countries continue to stoke tensions with fellow member states, while Italy has just sealed its ports in an effort to deter vessels of rescued migrants.

While the EU summit unanimously agreed to do more protect its external borders, the problem of how to distribute migrants within the bloc went unsolved in Brussels on Friday. The question mark continues to weigh heavily on the bloc just days before Austria takes the reigns of the EU Council presidency.

With a right-wing populist chancellor, Sebastian Kurz, at its helm, the bloc is about to be led by a country whose policies on migration in recent years have shown little willingness to compromise.

In 2017, Kurz and his conservative ÖVP (Austrian People's Party) formed a government in a coalition in Vienna with the far-right FPÖ (Freedom Party of Austria). He was serving as foreign minister at the peak the refugee crisis in 2015, and has credited himself with having curbed migration via the Balkan route into the into the EU.

A consensus on external border protection

"I think people are justifiably fed up of hearing migration talked about at the EU level, but not seeing anything happen in practice," said Kurz a few days ahead of his country's ascendence to the EU Council presidency in Brussels. The six-month Austrian tenure will be governed under the motto "A Europe that protects."

In line with the slogan, Kurz is emphasizing his agenda to reduce immigration into Europe via all routes. The recent decision by the EU to establish camps for migrants in North Africa is, in Kurz's view, a positive development.

Kurz lauded the bloc's shift in policy: "It wasn't like that in 2015. Now we are seeing action, and it's heading in the right direction." Austria is committed to improving the protection of the EU's external borders, and a massive expansion of the EU border protection agency Frontex is on the agenda.

Aspirations to expand Frontex are not new to EU policy. The EU Commission had beat Austria to it with a proposal set out at the previous summit of bulking up the agency with a further 10,000 personnel by 2020. But even if improved external border protection meets with broad approval, some see it as being difficult to implement. The last increase of just 1,500 staff has still not been achieved. EU governments are reluctant to send their own servants to the EU border guards.

Saskia Stachowitsch, director of the Austrian Institute for International Politics in Vienna, considers the latest and much larger increase in staff at Frontex to be unrealistic: "Knowing how difficult the last Frontex increase was to achieve, I do not think that the next one will be easy."

There is still little agreement on what to do with migrants who are already in the EU. Rome has been demanding for years that refugees registered in Italy be relocated to other EU states. Slovakia and Hungary unsuccessfully appealed against EU policy in 2015, both countries still took fewer refugees than is required of them by the bloc. Austria, like many other EU states, also did not fulfill its refugee intake quota.

"A presidency carries the task of bringing together fundamental positions," said Luxembourg Foreign Minister Jean Asselborn on German national radio channel Deutschlandfunk. "I consider it not right, not good, not European, and misleading that the Austrian presidency is aligning itself so strongly with the Visegrad countries. It will damage the European Union!"

Without a common European solution to "share the burden" – a balanced distribution of migrants within Europe – the ongoing dispute over immigration plaguing the bloc will not be solved, said Asselborn.

In the run-up to the to his role presiding over the EU presidency, Kurz repeatedly emphasized that his government wanted to play a bridging role and mediate between the more hardline positions. Whether Austria will actually succeed in implementing its agenda over the next six months remains to be seen, according to Janis Emmanouilidis, the director of the European Policy Center think tank in Brussels.

Two tasks, too little time: The EU budget and Brexit

Another topic on which Austria could enjoy a key authority position on is the negotiation of the next seven-year EU budget. The financial framework is to be set for the period from 2021 to 2027 – the first EU budget without the United Kingdom, following Brexit.

In order to compensate for the financial hole left by the Brits, the EU Commission has set forth a proposal for an increase on the payments by the remaining members of the bloc.

Kurz rejects the proposed contribution increase as "unacceptable" and announced "long and tough negotiations." The tug-of-war over the previous EU budget for the period from 2014 to 2020 took a total of two-and-a-half years.

Some member states, including Germany, are demanding a much faster turnaround this time, ideally ahead of the European elections next May, according to political scientist Emmanouilidis.

Austria's EU presidency coincides with the final stretch of the Brexit negotiations, set to be finalized this year in order to pave the way for the UK's exit from the bloc in early 2019. Whether such the deadlines can be met remains to be seen. There are several points of contention in Britain. The topics of border control between Northern Ireland and the Republic of Ireland, and whether Britain will remain in the single market, remain hotly contested.

The EU presidency would then have the task of ensuring that there is no disagreement among the remaining EU countries in order to conclude the negotiations as soon as possible – no small order.