Months after talks with Pyongyang broke down, Donald Trump said he would like to visit the Demilitarized Zone and "shake hands" with the North Korean leader. North Korea said the meeting would be "meaningful." 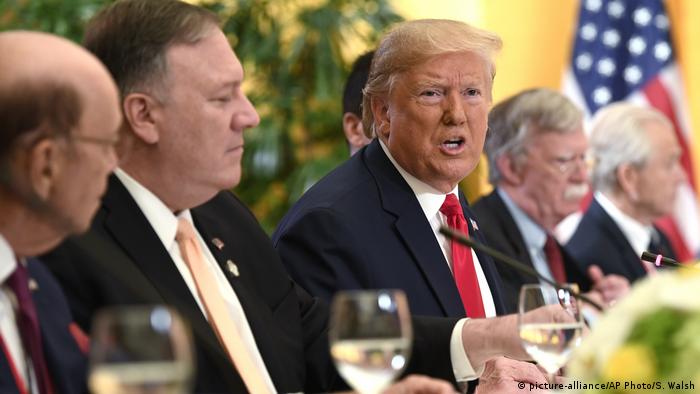 US President Donald Trump said on Saturday that he would be willing to meet with Kim Jong Un in the Demilitarized Zone (DMZ) with South Korea. He made the comments from the G20 summit in Osaka, Japan.

"I will be leaving Japan for South Korea (with President Moon). While there, if Chairman Kim of North Korea sees this, I would meet him at the Border/DMZ just to shake his hand and say Hello(?)!" Trump tweeted.

As he indicated in the tweet, Trump is scheduled to fly to South Korea later on Saturday, when the summit ends.

"We'll be there and I just put out a feeler because I don't know where he is right now. He may not be in North Korea," Trump told reporters.

"If he's there, we'll see each other for two minutes, that's all we can, but that will be fine," Trump said. He added that he and Kim "get along very well."

North Korean First Vice Foreign Minister Choe Son Hui responded to Trump's offer, saying it was a "very interesting suggestion," and the meeting, if realized, would serve as "another meaningful occasion in further deepening the personal relations between the two leaders and advancing the bilateral relations."

Read more: Trump-Kim summit: 'Trump has no one to blame but himself'

Trump had previously tried to visit the DMZ during a trip to South Korea in 2017, but his helicopter was grounded by heavy fog.

On Saturday, the US president said he wanted to go and inspect the heavily fortified area to see what a "real border" looks like.

The DMZ has layers of barbed wire, mines and other security measures, as the two Koreas are still technically at war.

Talks up in the air

Trump is the first sitting US president to meet with a leader of the hermit nation, having joined Kim last year at a summit in Singapore and signed a broad agreement to bring the North toward denuclearization.

But substantive talks between the two nations to achieve this largely broke down at a second summit in Vietnam earlier this year, where Trump and Kim were also present.

Though the two sides blamed each other for the impasse, the US has said it is ready to meet the North Koreans at any time to keep diplomacy alive and the two leaders exchanged letters.

Experts have warned that North Korea may never agree to fully give up its nuclear ambitions, which they say Pyongyang views as vital for regime survival.

A South Korea paper citing an anonymous source said that Kim Hyok Chol was accused of being a US spy and killed. Several officials who also worked on the meeting with the US have been killed or jailed, the paper said. (31.05.2019)

Ahead of a meeting with Japanese Prime Minister Shinzo Abe, President Donald Trump has dismissed recent missile tests in nearby North Korea. He later joined Abe for a round of golf outside Tokyo. (26.05.2019)

North Korea's leader reportedly said it was up to the United States to "come up with a courageous decision." But he said the country had to make up its mind by the end of this year. (13.04.2019)