Speaking to the powerful gun lobby, the US president praised "the eternal defense of our liberty." He used his speech to attack enemies, while announcing a withdrawal from a UN arms treaty. 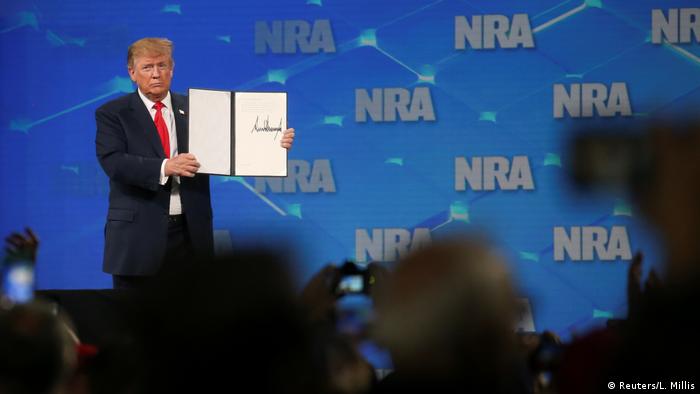 US President Donald Trump was greeted with cheers as he took the stage at the annual convention of the National Rifle Association (NRA) in Indianapolis, Indiana on Friday. He is the first president to speak to the influential lobbying group for three years in a row.

'We will live by American laws'

The biggest news to come from the speech was accompanied by sometimes barely intelligible comments and a bit of showmanship when Trump signed a letter to the Senate calling on them to return a UN arms treaty to the White House so that he could withdraw the US from it.

The UN Arms Trade Treaty, which regulates the $70 billion global conventional arms business, was signed by Barack Obama in 2013, but was never ratified. Trump said, "We will live by American laws, not the laws of foreign countries."

The United Nations called the Arms Trade Treaty that Trump wants to exit "a landmark achievement in the efforts to ensure responsibility in international arms transfers."

The agreement is the first legally binding treaty to regulate the international trade in conventional arms. It has been ratified by 101 countries.

Gun violence in US and still no better laws

UN spokesman Stephane Dujarric said the treaty "is the only global instrument aimed at improving transparency and accountability in the international arms trade."

"This is particularly important in present times, when we witness growing international tensions and renewed interest in expanding and modernizing arsenals," he said.

'Get ready to vote'

The president repeated many of his standard claims in what was clearly a campaign speech, and implored attendees to "get ready to vote." Although the emphasis was on guns and the Second Amendment, he also lauded the economy and tax cuts.

Trump stressed his support for the right of citizens to bear arms, while ominously echoing the gun group's dire warning that gun owners are facing an unprecedented threat from radical left-wing Democrats intent on taking away their guns and their freedom, saying, "Far-left radicals want to take away your voice, your rights, and your guns."

The majority of his address was spent on the attack. He called Democrats "obsessed" and "maniacs," claiming they had attempted to orchestrate a government overthrow. But he also went after "activist judges," calling them "one of the greatest threats to freedom."

Immigration and fear of asylum-seekers also figured largely in the speech, with the president vilifying "criminal aliens" and bashing asylum-seekers as fakes, telling the cheering crowd, "we're throwing them the hell out."

Trump railed against the press on several occasions during the speech as well, saying "the level of dishonesty and corruption in the media is unbelievable." The crowd ate up such comments, booing loudly as he pointed and sneered at reporters.

US gun laws - enough is enough

March for Our Lives - uphill battle for stricter gun laws

The president used NRA Executive Vice President Wayne LaPierre's dictum, "The only thing that stops a bad guy with a gun is a good guy with a gun" to praise certain school districts for allowing teachers to carry guns in school.

Read more: Opinion: Mass shootings in US show a government's failure to protect its people

"Who's better to protect students than the teachers that love them?," he asked.

He also invited three citizens to tell harrowing stories about how they had used guns — in two cases AR-15 assault rifles — to defend themselves and others.

Paris could have been prevented

Before the president wrapped up his speech with a long tale of brave Americans standing up against British tyranny, he spoke of the 2015 Paris terror attacks. Trump claimed that the attacks "probably wouldn't have happened" if France had less strict gun laws.

In the US, more guns mean more gun deaths