Pupils from a US school that experienced a mass shooting in February have started a bus tour to promote tougher gun control laws. The two-month trip is aimed at registering young voters who will support such measures. 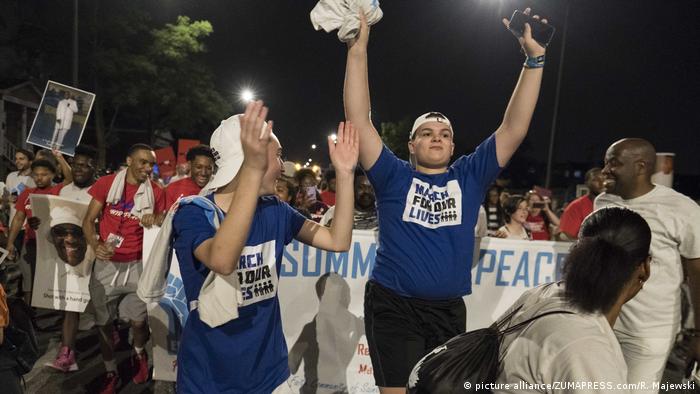 A group of US students who survived a February mass shooting at their school in Parkland, Florida, launched a nationwide bus tour on Friday to advocate for stricter gun laws at a rally in the city of Chicago.

The planned 50-stop "Road to Change" bus tour across more than 20 states has the goal of registering young voters who are prepared to cast their ballot for tougher gun control measures in a country that saw 11,000 cases of manslaughter or murder involving a firearm in 2016.

The tour is to take in both communities that have been affected by gun violence and those where politicians backed by the powerful National Rifle Association, which vehemently opposes controls on firearms, are seeking office.

Several students from the school have become gun control activists since the February 14 shooting at Marjory Stoneman Douglas High School, in which 17 students and staff were killed.

Gun violence in US and still no better laws

The students chose Chicago as the first stop of their tour because the city has such a poor record on gun violence, with 950 shootings and more than 220 murders so far this year.

At the rally, which is an annual event in the city to highlight gun violence, Parkland student Kyrah Simon told the crowd: "Our voices, your voices united are stronger than anything else."

Gabby Giffords, a politician who was seriously wounded in a 2011 shooting, also spoke at the event, urging the crowd of some 1,000 mostly young people to vote for the change they wanted.

The Parkland students have rekindled the gun control debate in the US, inspiring demonstrations around the globe under their motto "March For Our Lives." Among other things, they have succeeded in pressuring Florida lawmakers into tightening gun laws, including raising the legal age for purchasing a firearm from 18 to 21.