US President Donald Trump has told a National Rifle Association convention he will not tighten firearms laws while he is president. After the Parkland shooting, Trump had signaled an intention to take on the gun lobby. 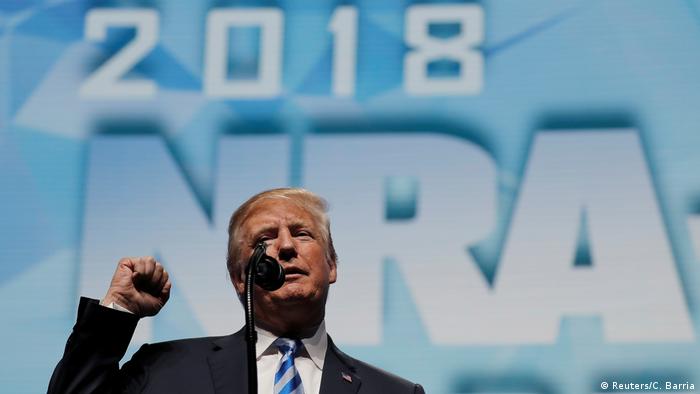 The US President on Friday told members of the National Rifle Association (NRA) that their gun ownership rights were being threatened by Democrats, but that he would ensure they were protected.

Speaking in Dallas, Texas, he also reiterated a call made in the wake of the Parkland shooting for letting highly trained teachers carry concealed weapons.

"Your Second Amendment rights are under siege, said Trump in his address to the NRA at its annual meeting. "But they will never ever be under siege as long as I am your president."

"The one thing that stands between Americans and the elimination of our Second Amendment rights has been conservatives in Congress," he said.

Trump's message appeared in contrast with his comments during a televised meeting on gun control with lawmakers in late February, in the wake of the Parkland school shooting in Florida. At that meeting, he chided Republican Senator Pat Toomey for "being afraid of the NRA."

Democrats in Congress have proposed specific policies such as universal background checks and a ban on military-style "assault" rifles, which they say would not alter the US Constitution's Second Amendment.

Since the Parkland massacre that left 17 people dead in February, no new gun laws have been introduced. However, Trump has said he will act. The administration is said to be pursuing a possible ban on "bump stocks," which allow semi-automatic rifles to operate more like automatics by firing a steady streams of bullets. Such a device was used in the October 2017 mass shooting in Las Vegas, in which 59 people were killed.

Read more: European gunmakers flood the US with firearms

The Parkland massacre sparked a wave of new gun protests led by students who survived the killing spree.

During his NRA speech, Trump also referred to the Paris attack in November 2015, in which 130 people were killed. Trump said the killings had happened in a city with the "toughest gun laws,” and that it would have been a "different story" if an employee of the theater where many of the victims were killed had been carrying a gun.

The National Rifle Association held its annual meeting in the wake of the deadliest US school massacre in a decade. Speakers such as Donald Trump said gun restrictions would not stop the rise of mass shootings.

The killing of 19 children and two teachers in a school shooting in Uvalde has sparked a nationwide debate on gun control. President Biden said the constitutional right to own weapons "is not absolute," and never was.