Victims of the recent Florida school shooting have called out politicians for their lack of action after yet another deadly massacre. "Shame on you!" the crowd said to President Trump and the National Rifle Association. 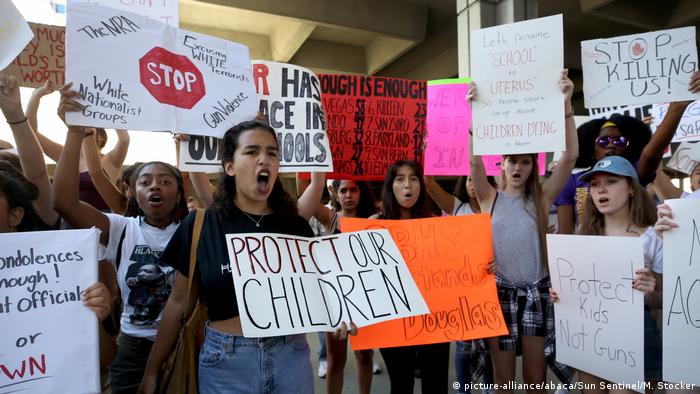 Thousands of students, parents and gun control advocates rallied in Fort Lauderdale, Florida, on Saturday to demand changes in legislation after 17 people were shot and killed at a high school in the nearby town of Parkland.

"They say a good guy with a gun stops a bad guy with a gun," said student Emma Gonzalez on the steps of Fort Lauderdale's federal courthouse. "We call BS."

The students also excoriated President Donald Trump and the National Rifle Association (NRA) for creating an environment in the United States in which even the smallest gun control proposals come up against fierce resistance.

"Shame on you!" the crowd chanted.

Gonzalez also gave voice to a question many in the US have been asking since Wednesday's shooting at Marjory Stoneman Douglas High School: How did 19-year-old Nikolas Cruz, a former student who was known to be mentally ill and exhibit erratic behavior, come to legally purchase an AR-15 semi-automatic rifle?

The FBI has admitted that it received two tips about Cruz, but failed to act. One came last September when a man reported a disturbing comment left by someone named Nikolas Cruz on his YouTube channel. "I'm going to be a professional school shooter," the user proclaimed. The agency was unable to pinpoint the source of the comment.

Then, in January, a person close to Cruz called the FBI with information about Cruz's firearms and disturbing behavior, but the agency failed to follow up on the tip. The FBI has acknowledged that the information should have been shared with its local office in Miami, where it could have been investigated.

Broward County Sheriff Scott Israel has also said his office received more than 20 calls about Cruz in the past few years. At least two of these calls reportedly came from his own mother, before her death in November.

Cruz's mental health was also a matter of public record, as he has been diagnosed with autism and ADHD and had undergone psychological evaluation by state authorities. However, he was able to pass a background check to purchase his AR-15, which despite being designed for military use, is easier to get in Florida than a handgun.

President Trump on Saturday night criticized the FBI for having "missed all the many signals" regarding Cruz, linking the agency's failings in the case to what he said was an overfocus on suspected collusion between his election campaign and Russia.

Students: Not only a mental health issue

During her speech, Emma Gonzalez slammed the reasoning used by many conservative politicians that school shootings are usually the product of mental health issues and would not be prevented by tightened gun control laws.

"He wouldn't have harmed that many students with a knife," she pointed out.

"Because of these gun laws, people that I know, people that I love, have died, and I will never be able to see them again," said Delaney Tarr, another student at Stoneman Douglas.

"A lot of people are saying that these kids are activists, these kids need to be politicians," Gonzalez told a reporter after the demonstration. "But a lot of us are just other students who figured there's strength in numbers."

Following the rally in Fort Lauderdale, a vigil was held in St. Petersburg, Florida, some 250 miles (400 kilometers) northwest of Parkland. Hundreds of people lit candles in honor of the victims and made similar calls for politicians to take action over the violence.

Cruz has been charged with 17 counts of murder. According to police, he confessed to the crime while in custody.

In a short statement, President Donald Trump spoke of the need for healing and fighting mental health problems but did not mention guns. Wednesday's shooting was the fifth deadliest in US history. (15.02.2018)

At least 17 people have been killed and many others injured in a school shooting in Florida. Police arrested a teenager who had previously been expelled from the school. (14.02.2018)

Jurors are set to decide on a death sentence or life in jail for the 23-year-old who pleaded guilty to killing 14 students and three staff members at a school in Florida in 2018.