US Secretary of State John Kerry has signed the United Nations Arms Trade Treaty. But the treaty will face fierce opposition in the Senate, where concerns over Americans' gun rights predominate. 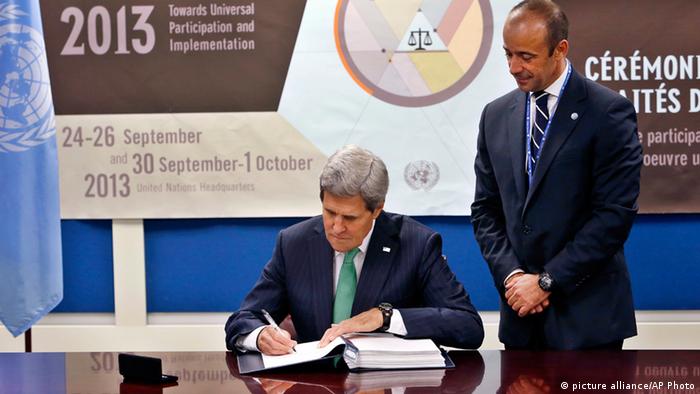 With the stroke of a pen, the world's largest arms exporter signed the Arms Trade Treaty (ATT) at the United Nations this week amid widespread international praise. According to the Stockholm International Peace Research Institute, the United States accounts for approximately 30 percent of the world's arms deliveries, making its participation critical to the agreement's success.

"Today's signing of the Arms Trade Treaty by the United States is a significant victory for human rights and development," Oxfam America President Raymond Offenheiser said on Wednesday.

"The US is the world's foremost arms exporter, and US signature is a powerful step demonstrating the United States' commitment to preventing mass atrocities and protecting civilians from armed conflict," Offenheiser added.

But Secretary of State Kerry's signature is not the final say on whether or not Washington will actually join the agreement. The US Senate still has to ratify the ATT. Senators from both parties have voiced concern that the treaty could infringe on Americans' second amendment right to bear arms. Many have vowed to vote against the agreement.

"This treaty is already dead in the water in the Senate, and they know it," said Senator James Inhofe, the top Republican on the Armed Services Committee. "The administration is wasting precious time trying to sign away our laws to the global community and unelected UN bureaucrats."

Signed, but not ratified

As the UN treaty negotiations approached their conclusion last March, Inhofe drafted an amendment to a Senate budget resolution that blocked the US from ratifying the ATT. His amendment passed with 53 senators voting in favor.

But according to arms trade expert Rachel Stohl, the treaty doesn't need to be ratified by the US for it to be effective. 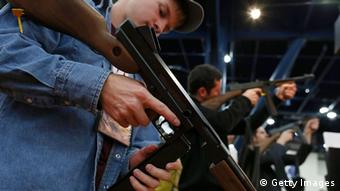 Many Senators worry the treaty would restrict Americans' gun rights

"That's because the United States already does everything required by the arms trade treaty as part of its normal export control process," Stohl, with the Stimson Center in Washington D.C., told DW. "There are no new obligations that the US has to undertake under this treaty."

With Secretary of State Kerry's signature, the US holds itself under an obligation - as a matter of policy - to not work against the purpose of the treaty, regardless of whether or not ratification by the Senate actually takes place.

"That puts the US in a position where it's not quite the same as ratification, but it is in the neighborhood of ratification, because the US will end up complying with the treaty even though the Senate has not actually provided its advice and consent," Theodore Bromund, with the conservative Heritage Foundation, told DW.

On Wednesday, Secretary of State Kerry sought to mollify domestic opposition to the treaty, saying that the agreement was aimed only at "terrorists and rogue actors." The treaty covers everything from tanks and warships to small arms.

"This is about reducing the risks of international transfers of conventional arms that will be used to carry out the world's worst crimes," Kerry said.

"This treaty will not diminish anyone's freedom," he said. "It recognizes the freedom of both individuals and states to obtain, possess, and use arms for legitimate purposes."

But the National Rifle Association (NRA), America's most powerful pro-gun lobby group, has accused the White House of undermining the second amendment by signing the treaty.

"The Obama administration is once again demonstrating its contempt for our fundamental, individual right to keep and bear arms," said Chris W. Cox, the executive director of the NRA's Institute for Legislative Action. 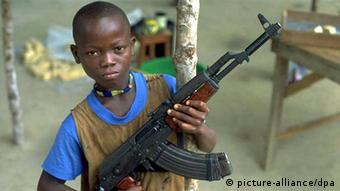 Stohl dismissed such criticism as "a deliberate game of misinformation" by the treaty's opponents.

But Bromund says that supporters of the treaty aren't being straightforward about its potential impact. He expressed concern that other states could use the treaty to "shape US policy" on arms transfers. Over time, the treaty could introduce foreign norms to the US that would lead to changes in its gun laws, he said.

"What I'm much more concerned about is the slow exertion of administrative and bureaucratic pressure in a way that makes it hard for people to actually exercise the rights that they have under the second amendment," Bromund told DW.

Stohl, however, sees the treaty as a way for the US to exercise leadership and put pressure on other nations who have not implemented strict national export laws on weapons.

"Its signature [on Wednesday] was really more symbolic and a demonstration of leadership on what's really a global issue, but where the United States as the world's largest exporter has a real opportunity to make a difference by leading by example," she said.

In order for the ATT to take effect, 50 nations have to ratify it. So far, only seven have done so. Major arms exporters such as China and Russia still have not decided whether they will join the treaty.

According to Hugh Griffiths, with the Stockholm International Peace Research Institute, the ATT - like other UN documents such as the Genocide Convention and the Convention on Transnational Organized Crime - is unlikely to have any real impact.

"The ATT is much weaker than these instruments, and indeed the UN arms embargoes that are routinely flouted and most often than not, not properly enforced by most states," Griffiths told DW via email. "The ATT is gesture politics, a white elephant."

More than 60 countries have signed a landmark agreement to regulate the arms trade, requiring countries to think twice about which weapons deals they allow. However, doubts exist about whether the treaty will work. (03.06.2013)

The United Nations General Assembly has approved a treaty regulating cross-border trade in conventional weapons. The treaty was put to an assembly vote after diplomats failed to pass it unanimously. (02.04.2013)