Did China′s authoritarianism actually help the coronavirus spread? | Asia | An in-depth look at news from across the continent | DW | 05.02.2020

As coronavirus cases in China continue to increase, the country's leadership is coming under scrutiny for its response. Authorities have been accused of covering up the outbreak when it first emerged. 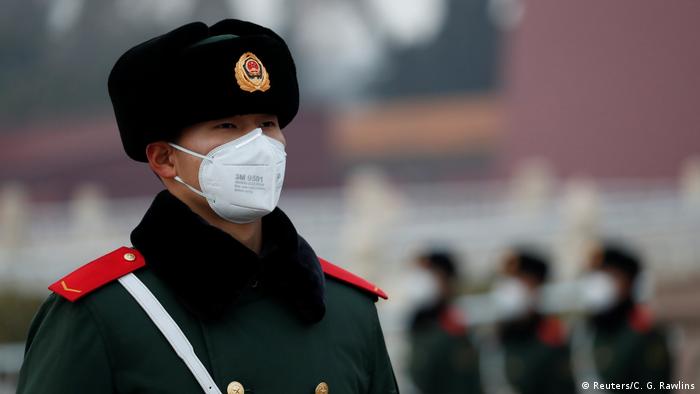 "The outbreak is a major test of China's system and capacity for governance, and we must sum up the experience and draw a lesson from it," read a statement from the meeting broadcast on state-run television.

The statements are a rare admission of guilt from China's Communist Party, which is known more for cover-ups than candor.

As the number of coronavirus infections and deaths increase daily, China's leadership and system is facing a major test. There is also evidence that Beijing has not been as transparent on the virus outbreak as it wants people to believe.

Zhong Nanshan, a doctor who helped expose the Chinese government's cover-up of the SARS outbreak in 2003, was recently made head of a special research panel assisting the National Health Commission on tackling the ongoing coronavirus outbreak.

Last week, Zhong's group issued an optimistic prediction: Cases of coronavirus would peak "within a week" and then begin to subside.

It has become clear that Zhong's prognosis was incorrect. As of Wednesday, February 5, the number of cases is more than 24,000 and rising. The number of fatalities is approaching 500, most of them in central China.

And there are potentially tens of thousands of suspected infections that have not been diagnosed in China due to the overburdened healthcare system.

The coronavirus outbreak is testing the cult of personality built around President Xi, under which party subordinates are wary of passing bad news onto superiors.

Last week, the mayor of Wuhan, Zhou Xianwang, told media that the city's crisis management had "not been good enough," adding that informing the public about the first coronavirus cases had been delayed for weeks due to "government regulations." To read between the lines: Zhou needed permission first from Beijing.

New reports have also come to light about how the local government in Hubei province tried to cover up the outbreak in December.

One example that recently surfaced involved a doctor in Wuhan who tried to warn colleagues on social media in December about a mysterious SARS-like virus that he was seeing in patients.

After authorities in Wuhan picked up on his messages, he and his colleagues were warned to stop "spreading rumors" and were temporarily detained.

A few weeks later, it was reported that the doctor who tried to sound the early warning had been infected with the coronavirus.

And a recent study funded by China's science ministry on the transmission of the coronavirus published in the New England Journal of Medicine showed that "human-to-human transmission had occurred among close contacts" as early as the middle of December 2019.

However, in the early stages of the outbreak, there was little information about the virus, and no precautionary warning, shared with the Chinese public. Lunar New Year's preparations continued, and the dangerous, highly contagious virus began to spread.

Read more: Coronavirus? How to tell it's not cold or flu

Now that the gravity of the coronavirus outbreak has become clear, many Chinese, especially the younger generation, are quietly criticizing the country's slide into authoritarian rule under President Xi.

"I am 100% certain that Communist Party cadres did not report news of the virus outbreak because it would have ruined their chances of being promoted," said a young man at a cafe in Beijing.

"People like me, who only want the best for our country, cannot talk openly anymore. One day we will start to ask why we cannot access uncensored information online."

Google, Facebook and international media, which are currently blocked in China, were all freely accessible 10 years ago. Uncensored information about the outbreak, for example, is only available in China via illegal VPN software, which can also be shut down at the discretion of authorities.

Trouble behind the 'great firewall'

Chinese censors play a nervous cat-and-mouse game with users behind the "great firewall." For example, negative commentary under a health committee live stream will be quickly erased.

Despite Beijing's attempt to control the narrative, many people comment on Chinese social media that they do not trust information on the coronavirus coming from authorities and accuse officials of an incompetent response.

For example, the governor of Hubei province drew a surge of criticism on Chinese social media for fudging the numbers of protective face masks during a press conference. He told a journalist that 10.8 billion masks had been produced.

After he was handed a stat sheet, he corrected himself that the real number was 1.8 billion. A few minutes later, he had to admit that the correct number of masks was actually only 1.8 million.

"It's no wonder that this virus was able to spread with such force," commented a user on China's version of twitter, Weibo.

President Xi has called for a "stronger guidance of public opinion" in China. And the bigger the crisis, the more authorities will try and control the message.