Coronavirus: A dramatic escape from Wuhan′s lockdown | Asia | An in-depth look at news from across the continent | DW | 03.02.2020

The spread of the coronavirus in China is forcing many to lock themselves in at home. Those who traveled to the Wuhan area and managed to get out before the city was shut down are under close surveillance. 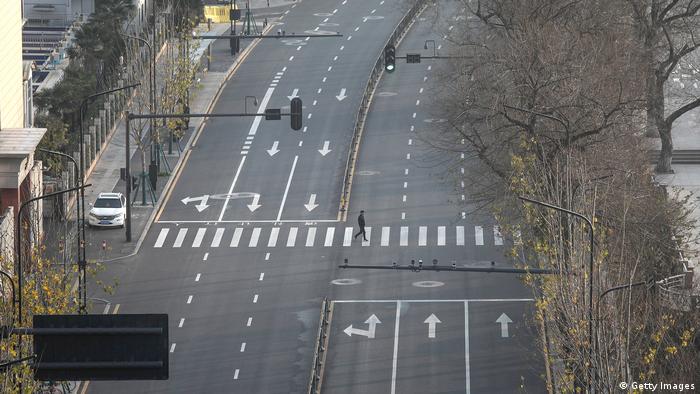 Ten days ago, Claire locked herself in at home after a dramatic escape from Wuhan. She had traveled to the city, where the coronavirus originated, to spend Chinese New Year with her in-laws. Then, the news broke that Wuhan would be locked down. Claire and her boyfriend escaped just minutes before it happened.

Since then they have quarantined themselves at home. "In the beginning, it was our own decision to stay in," she told DW via videochat. But later the party state weighed in. "We started getting phone calls from the neighborhood committee and the local police station urging us to stay in." They have to measure and report their temperature to the authorities every day. Claire is a pseudonym to protect her family and she didn't want to reveal the name of her hometown.

China has been both criticized and praised for its response to the crisis. When the first cases of the disease broke out in December local authorities covered it up. Doctors who reported mysterious cases of pneumonia in chat groups were summoned by the police and threatened with punishment.

Authorities initially ruled out human-to-human transmission of the coronavirus even after scientists had evidence to the contrary. During that time, the virus was able to spread unchecked. Then, in a dramatic turn, authorities decided to lock down the metropolis of Wuhan, a transport hub with a population of 11 million. Neighboring towns and cities in Hubei province followed suit.

As of now, an estimated 56 million people remain locked inside Hubei province — nearly the population of Italy. "We would see many more cases outside of China and probably deaths, if it were not for the government's efforts and progress," wrote Tedros Adhanom Ghebreyesus, the director of the World Health Organization on his Twitter account.

However, some public health researchers have warned that drastic measures might have the opposite effect by either driving patients into hiding or creating panic among the population. In the initial days of the lockdown, images showed people rushing to the hospitals for a check-up.

Pictures of people crammed together in the waiting areas of hospitals went viral on Chinese social media networks. "I saw several dead bodies in the hospitals," said citizen journalist Chen Qiushi, whom DW contacted via video in Wuhan. The lawyer has traveled to the city to document the situation. "And I saw many people who had a fever and a cough for several days but did not know whether they were infected because the hospitals lacked test kits."

Claire was at her in-laws' house when she heard about plans to shut down the city. She had arrived the previous night and was preparing to celebrate Chinese New Year, the most important family holiday in China.

The next day, at 9 a.m., she saw a message banning people from leaving the city as of 10 a.m. "I panicked and told my boyfriend we need to leave immediately," she said. They quickly packed and headed outside. No taxis and no Didis (China's Uber-like ride hailing service) were available, so they walked up to a car waiting at a traffic light and told the driver they would pay him whatever he wants if he took them out of the city. For 800 yuan (€103, $114) he drove them to a township outside of Wuhan. There they were able to board a train that took them back to their hometown. 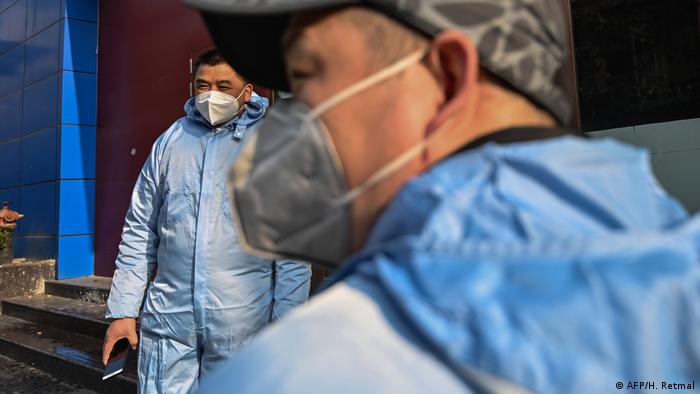 Most taxi and other transport services have stopped their operations

Since then they have stayed inside their apartment. They only leave home to pick up groceries that delivery services leave at the gate of their compound or to take down the trash at night. "We wait until everybody is asleep. Then we put on our masks and take the trash down," Claire said.

Chinese cities are eerily empty these days. People rush past each other avoiding close contact. Walking on the sidewalk opposite a hospital in Beijing a woman glanced over, looking anxious. Three people were waiting for a check-up outside the clinic. "Not too many people, it seems that Beijing has not yet been hit hard," she said. She had just gone out to buy a few vegetables and was walking back home. "We mostly stay in these days," she continued. "People have reacted more quickly than the government."

A young man, who was waiting at the roadside for a taxi, said that there was nothing to be afraid of as long as people took precautions. "We need to avoid crowded places, wear masks, and wash our hands regularly. The government has given us clear instructions."

The government's initial unresponsiveness to the disease has turned into a flurry of activity on all levels. In Beijing, neighborhood committees are going from door to door to hand out leaflets and ask whether anybody is experiencing health issues.

Loudspeaker announcements and billboards remind residents to register with the authorities, if they have recently returned to the city. Hotels, office buildings and shopping centers have set up checkpoints to measure the temperature of visitors.

Throughout the country, authorities are tracking down people who have recently visited Hubei province and ordering them not to leave their apartment for two weeks. All over the country, people from Hubei say that they have difficulties finding a hotel room. Some report that locals harass them.

In her hometown in central China, Claire is counting the days until her two-week quarantine ends. She is looking forward to going for a run and resuming daily life tasks like grocery shopping, although she still plans to limit her social life until the epidemic is under control.

She expects that her experience will have an impact on her life in the near future. "The authorities, my close friends and my family know that we have been to Wuhan, but I would not tell other people," she says. "I would just make them feel afraid."

The death toll from the coronavirus epidemic in China has surged, with more than 17,200 infected. The updated figures came as authorities prepared to open a new 1,000-bed hospital to treat victims of the new virus. (03.02.2020)

China's COVID-19 warning app enables health authorities to move quickly against a virus outbreak. But it seems officials also use the app to stop perfectly healthy people from doing what Beijing doesn't want them to do. And the target is dissidents.