Debate about Polish fighter jets for Ukraine was divisive — and distracting | Europe | News and current affairs from around the continent | DW | 11.03.2022

Debate about Polish fighter jets for Ukraine was divisive — and distracting

Poland's proposal to send MIG-29 fighter jets to Ukraine proved highly controversial. How would the plan work? How would Russia respond? Was the whole debate a diversion tactic? 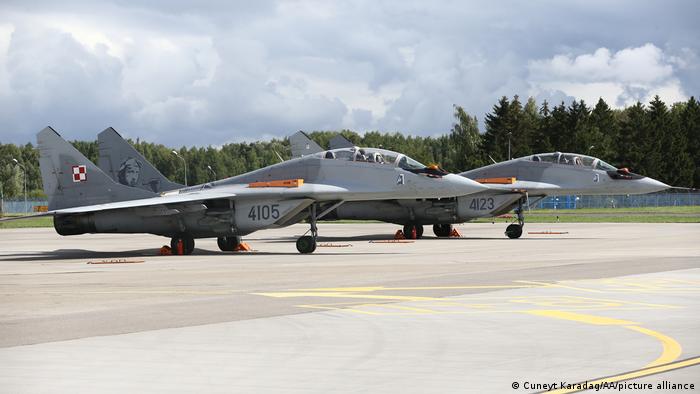 Will MIG-29 fighter jets currently owned by NATO member Poland be supplied to Ukraine? And if so, how would they be delivered? This question was hotly debated among Washington, Kyiv, Brussels and Berlin this week.

Polish and US leaders discussed how a possible handover could be organized. All NATO members, meanwhile, expressed serious concern that the move could provoke Russian retaliation. German Chancellor Olaf Scholz ruled out the step, whereas his foreign minister, Annalena Baerbock, did not.

These fast, agile MIG aircraft were first developed by the Soviet-era Mikoyan-Gurevich design bureau in the 1970s as air superiority fighters. Later iterations, such as the MIG-29, can also be deployed as bombers. Only three NATO member states still use these aircraft: Bulgaria, Slovakia and Poland. While the former two own 16 and 12 MIG-29s, Poland is thought to possess between 26 and 33. The majority of these were bought by Poland from Germany in 2003 for the symbolic price of one euro each. The fighter jets were previously owned by the East German Air Force. Romania, which owned 20 MIG-29 jets, decommissioned them many years ago. 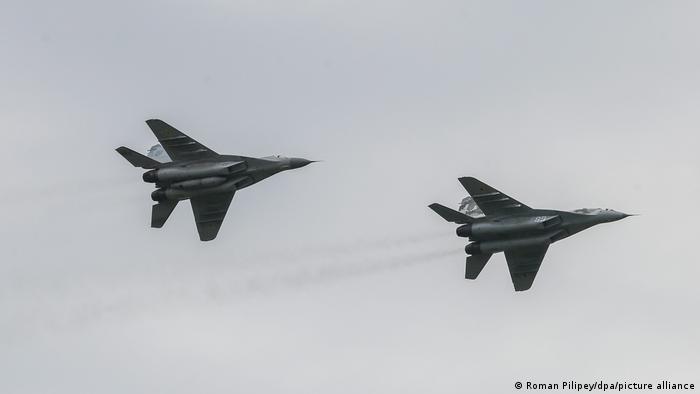 Ukrainian MiG-29 jets during a drill in August 2016

Although there still are numerous MIG-29 around, they're not necessarily combat-ready. The aging Soviet-era jets typically require extensive maintenance. While Poland has the capacity to repair its fleet, Bulgaria and Slovakia have relied on Russia to fix their fighters. For this reason, a mere four to six of Bulgaria's MIG-29s are currently operational. Prime Minister Kiril Petkov therefore dismissed calls in early March for his country to transfer jets to Ukraine. Spanish NATO fighters, now based at Bulgaria's Graf Ignatievo Air Base, have been guarding the country's airspace since mid-February.

US rejects Polish plan to send fighter jets to Ukraine

DW learned from Bulgarian government sources that the country's refusal to supply Ukraine with MIG-29s stems from disagreements within the governing alliance. The Bulgarian Socialist Party, which traditionally maintains a pro-Russian stance, has threatened to leave the four-way coalition if Bulgaria arms Ukraine. "In light of these political factors, I am expecting [the handover of] Polish MIGs [to be the likeliest outcome]," military expert Gustav Gressel, of the European Council on Foreign Relations, told DW.

What makes the MIG-29 such a powerful weapon in this war? "Ukraine could deploy them instantly, without its forces needing weeks of training," says Carlo Masala, a defense analyst with the Bundeswehr University Munich.

Tactical considerations play a role, too. "Russia still has not achieved air superiority in Ukraine and it will be cautious about or refrain from sending its most vulnerable aircraft, chiefly bombers, if there is a risk they will encounter Ukrainian fighter aircraft," says Gustav Gressel. This, he says, reduces the risk of Russian carpet bombing and gives Ukrainian cities greater chance of survival.

Masala is skeptical. "The delivery of MIGs would not be a game change in this war — but it does represent a new escalation in western engagement," he says.

Russian President Vladimir Putin has said he would consider the delivery of MIGs to Ukraine a direct interference in the conflict, implying this would justify retaliation. This, in turn, could trigger NATO's self-defense clause and lead to all-out war with Russia. The question as to who might deliver fighter jets to Ukraine and how is therefore highly fraught. "A direct handover, either by Ukrainian pilots collecting the jets in Poland, or Polish pilots flying them to Ukraine, would be very risky," says Masala. "This would open the territory to a party waging war." It's for this reason that Hungarian Prime Minister Viktor Orban banned the delivery of arms to Ukraine directly though Hungarian territory on March 7. 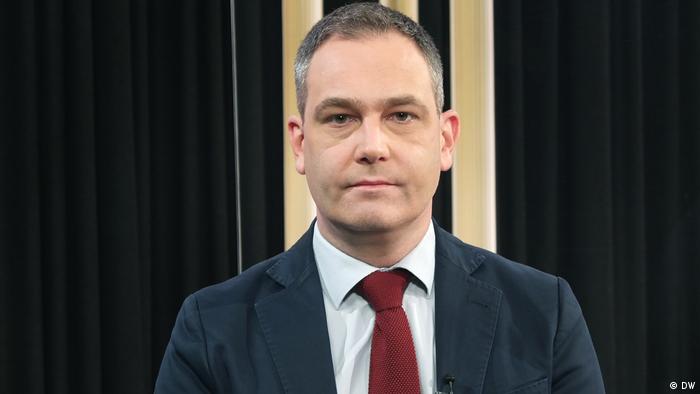 Gustav Gressel says talk of delivering jets could be a ploy

Still, Gressel doubts Russia would launch a retaliatory attack on Poland or another NATO state should tensions rise. "This amounts to saber rattling and mind games, there are no indications Russia is planning an attack; Russia needs all its forces in Ukraine," says Gressel. "Striking Poland or any other countries would severely complicate Russia's military situation."

How, then, could the fighter jets reach Ukraine? "Secretly transporting them [into the country] would be the wisest choice," argues Masala. The US military and intelligence services have considerable experience running such operations. Shipping the aircraft from Poland to Ukraine's Black Sea coast, meanwhile, is out of the question. This would take too long. Besides, the Russian navy has sealed off Ukraine's coastline and only remaining port, Odesa.

Delivering the jets over land by crossing the Carpathian Mountains presents a formidable challenge. "This is almost impossible, in part because of the jets' wingspan," says Gressel. He says the aircraft would have to be flown to Ukraine. He suggests one way this could be done: "Give the aircraft a new paintjob, then have a Ukrainian or Polish pilot fly them over; all electronic systems should be disabled during a cloudy night, with the US air force accompanying them to the border to conceal the operation," says Gressel.

Decision-makers in the US, Poland, Brussels and Germany have openly commented on and issued surprisingly contradictory statements regarding the suggested jet transfer. "The potential delivery of MIGs has been talked up, there was too much public debate and too little action," says Carlo Masala. Over the past days, leading politicians have voiced a plethora of opinions on the suggested handover, leaving some wondering whether politicians have been attempting to cause deliberate obfuscation.

"This war has been accompanied by massive psychological warfare , making it almost impossible to discern fact from fiction, and verify information," says Masala. "All this talk could be a ploy to divert attention," argues Gressel. He is certain the fighter jets will be flown, or already have been flown, to Ukraine. As German Foreign Minister Annalena Baerbock said in a television appearance last week: "Not every plan gets officially announced."