Croatia police accused of abusing refugees | Europe | News and current affairs from around the continent | DW | 16.08.2018

International aid organizations have reported that Croatian police are using violence to push refugees back into neighboring Bosnia-Herzegovina. Croatian authorities deny the accusations. 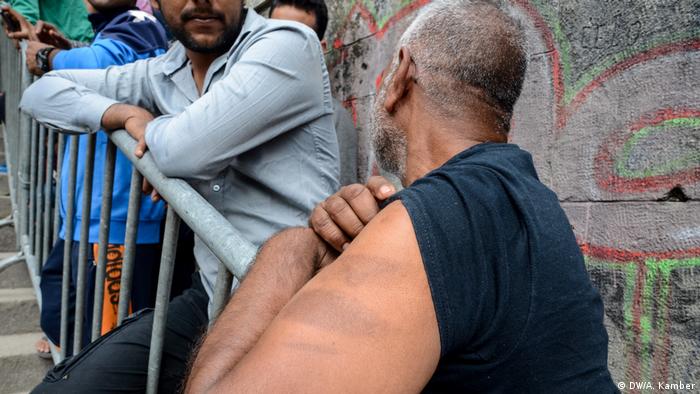 A middle-aged man steps out of a line of refugees. They are waiting for food at a makeshift camp in the northwest of Bosnia-Herzegovina. He removes his t-shirt to reveal welts and dried blood across his back. It is becoming a familiar image, one similar to those shared on social media several days ago, which also blame Croatian police.

The refugees near the Bosnian village of Velika Kladusa have tried to reach Croatia, an EU member state; the border is not far from here. Of the 10 refugees speaking to journalists, nine reported abuse by Croatian police; violence and insults, stolen money and damaged phones. Their efforts to apply for asylum have also been thwarted, they said, including being forced to walk back to Bosnia through dense forests. 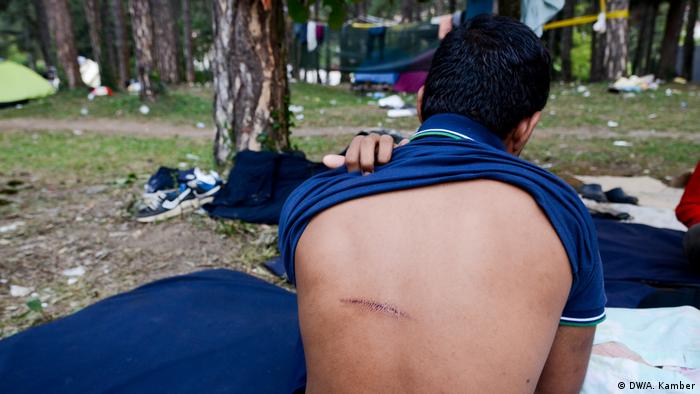 This man and others claim that Croatian police abused them

Photos of the beaten man from Algeria were first shared on social media by "No Name Kitchen." The aid organization's volunteers help refugees in Rome, in Sid in Serbia and here in northwestern Bosnia-Herzegovina. In addition to helping them with food, blankets, clothing and showers, the organization is part of a larger network reporting police violence along the so-called Balkan Route, which many refugees take to reach the EU. More than 200 cases across the region have been recorded on the website borderviolence.eu since the start of 2017.

"There are one or two new cases every day. We don't have the ability to document everything," Marc Pratllus from No Name Kitchen told DW. "It's clear on a daily basis that the violence is systematic. You just have to visit a refugee camp and ask them.

Yesterday we were at a bus station where 25 people were sleeping who had been sent back from Croatia. Fourteen had been beaten, and a few had broken ribs."

Migrants pushed out of Croatia and back into Bosnia-Herzegovina have reported that Croatian police treated them particularly brutally. In one statement on borderviolence.eu, a 47-year-old Iraqi woman speaks of injuries to the face, arms and legs, sustained from police beatings. Her 14-year-old son was also reportedly beaten. They also took her money, a phone and a laptop.

NGOs in the region have warned that it is just one of many examples. "We have documented 17 women being forcibly returned to Bosnia from Slovenia and Croatia in the last two weeks. More than half of the cases involved minors," reported the organization, Are You Syrious.

"In returning them, the Croatian police make it impossible to apply for asylum, a violation of Croatia's own constitution and international law," said Emina Buzinkic from Dobrodosli (Welcome), a refugee aid umbrella group for more than 60 Croatian civil society organizations.

Read more: Germany: More than half of deportees go missing

The change in Croatian authorities' attitude from helping refugees in 2015 to abusing them today is a result of the EU's new "detain and deport" refugee policy, they say.

Croatian government: 'No means of coercion'

"No means of coercion were used in any of the cases investigated that involved bodily harm or seizure of property by the police against migrants," the ministry told DW in an e-mail. In Croatia, migrants' basic rights and dignity were respected, the statement added, and access to international protection was provided for.

"The Republic of Croatia has an active and successful return agreement with Bosnia-Herzegovina that regulates the return of those who have entered illegally," the statement said. 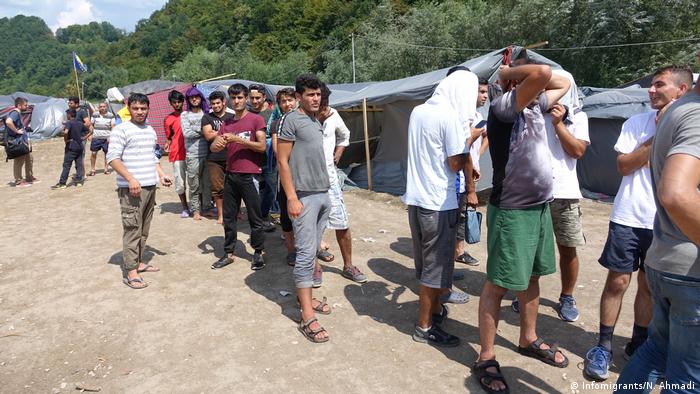 Many migrants claim they have been abused by police

Last year, 4,808 people were picked up who crossed the border illegally, according to Croatian government statistics. In the first seven months of 2018, that number stood at 3,172. Meanwhile, official Bosnian statistics show that, in the same time period, a mere 300 people were returned based on the bilateral agreement.

"In reality, the bilateral return agreement does not work at all," said Bosnia-Herzegovina's security minister, Dragan Mektic.

Looking for the truth

Refugee reports of violent returns are impossible to corroborate, said Peter Van der Auweraert, the Balkans Coordinator for the International Organization for Migration. "I also know about violence among migrants," he said. "And it's sometimes difficult to find out where the injuries come from, without a proper investigation."

Aid organizations' monitoring police work along Croatia's border with Slovenia has led to more refugees applying for asylum in Slovenia. But here, too, their rights are systematically violated, said Andrej Kurnik a social sciences researcher in Slovenia's capital, Ljubljana. "Mutual blackmail" in the EU is the real reason behind police brutality in both Slovenia and Croatia, he said.

"Slovenia takes back refugees from EU member states further north, such as Austria, which is closing its border with Slovenia. In turn, Slovenia blackmails Croatia, which is also hoping to join the Schengen zone." Croatia's excessive police abuse began, he added, when Slovenia's interior minister threatened drastic measures against Croatia if Croatia did not do more to stop refugees."

Some EU leaders are attending a mini-summit in Brussels. They'll discuss differing approaches to how the bloc can deal with a sustained stream of migrants and refugees seeking a new life in Europe. (24.06.2018)