Creator of the largest Holocaust memorial turns 70, but his life work continues

Gunter Demnig has laid down over 60,000 brass-plated stumbling stones in 22 countries so that the victims of the Holocaust are never forgotten. The sculptor is turning 70 today. 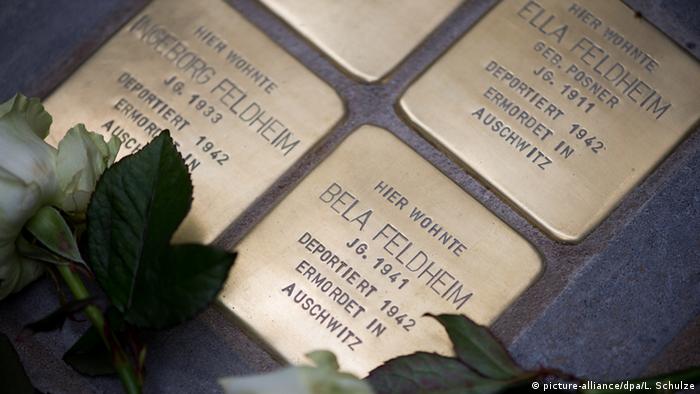 "I can't even imagine the six million murdered Jews and the whole concept of Auschwitz," Gunter Demnig once said in an interview.

This feeling eventually inspired his lifelong mission to commemorate the victims of National Socialism  and to recognize and restore dignity to those whose names are being forgotten.

Demnig cites the Talmud, which states that "a person is not forgotten until his or her name is forgotten."

Since 1992, Demnig has traveled to all corners of Europe to lay down his "stolpersteine," or stumbling blocks, 10 by 10-centimeter brass-plaqued stones placed on pavements that memorlialize the inhabitants of houses who were murdered by the Nazis.

"Here lived Max Liff. Born in 1885 and deported in 1942. Murdered in Auschwitz," says one stone. Th plaques, cemented into pavements by his own hand, are now found in more than 600 locations across Europe. 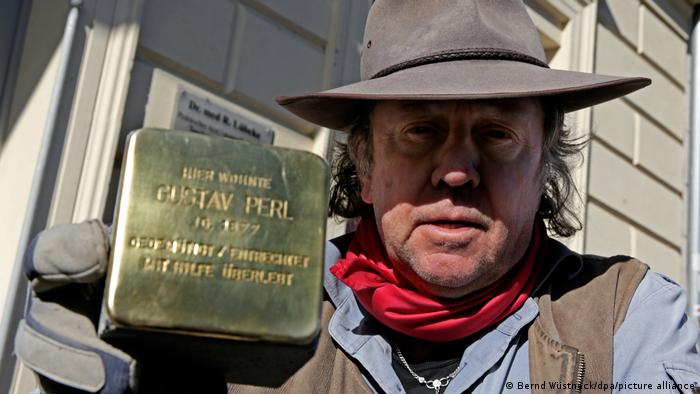 Gunter Demnig readies to lay down a stolperstein in Schwerin, Germany

History at the doorway

The Holocaust and the war have always occupied the mind of the native Berliner.

Born on October 27, 1947, he belongs to the generation that questioned the role of their parents in Hitler's Germany. When he found out his father had participated in air raids during the Second World War, he did not speak to him for five years.

The sculptor laid down the first stolperstein in Cologne in 1992, exactly 50 years after Heinrich Himmler ordered the deportation of Sinti and Roma to extermination camps. The local authorities were not aware of the act, but Demnig's project has eventually become the world's largest decentralized memorial site in the world.

"When people see the terror started in their city, their neighborhood, maybe even in the house they are living in — it all becomes quite concrete," he explained.

For Demnig, art has always had a political message. During the Vietnam War (1955-1975), he raised a US flag in a Berlin garage on which the stars had been replaced with skulls. He was jailed for three hours — and got a lot of attention.

The stolpersteine seemed like a natural development of his work that focuses on leaving or following traces. 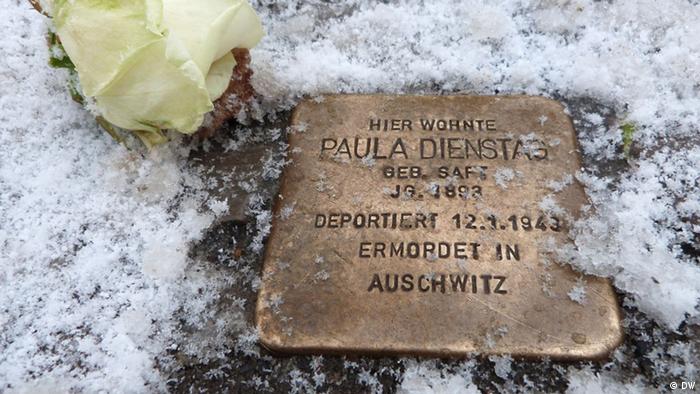 Memorializing the Holocaust in Goethe Street in Berlin, Charlottenburg

In the early 1980s, Demnig created conceptual artworks using animal blood. The red lines he drew from Kassel (where he had studied) to London, Venice and Paris were a personal protest against the hyped art business.

In the spring of 1990, he commerorated the deportation of 1,000 Roma and Sinti people from Cologne to the extermination camps in 1940.

When a local woman argued that "gypsies never lived there," he knew he was doing the right thing. "I must go on," he said.

Since 2000, Gunter Demnig has dedicated himself completely to laying down his brass plaque memorials. He started in Cologne and Berlin and later expanded the project to Poland, Austria, the Netherlands, France, Ukraine, Hungary and other European countries from where the Nazis deported people to death camps.

His work focuses on all victims of the Holocaust, from Jewish, Sinti and Roma people to homosexuals and political prisoners.

Demnig travels with a hammer drill, a chisel and a trowel to remove existing cobblestones, which he replaces with his stones containing a brass-plated inscription. 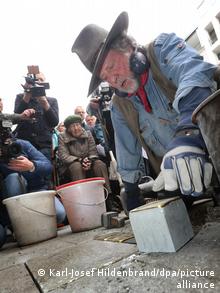 Stolpersteine were installed by Demnig in Augsburg, Germany in May, 2017

He sources the information about the victims from The Institute for the History of the German Jews in Hamburg, but his project is also supported by a network of volunteers who sponsor the stones and obtain permits from local authorities.

The stones, which cost 120 euros each to cover the material and the logistics, are often commissioned by the descendants of the victim.

For his indefatigable commitment to ensure that people "stumble" upon history — and thus never forget — the artist has received numerous awards, including the 2012 Marion Dönhoff Prize for International Understanding and Reconciliation, the German Jewish History Award Berlin, and the Erich Kästner Prize, for which he received 10,000 euro that he donated to the Jewish Cemetery in Dresden.

"The stolpersteine are the opposite of repression. They are at our feet, right in front of our eyes, forcing us to look down. Projects like this make the dialogue between Germany and Israel possible," said Israeli publicist and former diplomat Avi Primor about Demnig's work. 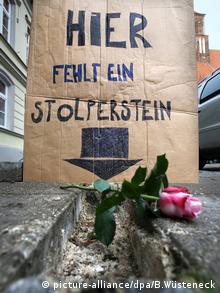 Giving up is not an option

Not everybody is happy about Demnig's cobblestones, however. From time to time, his stolpersteine are smeared, destroyed or pulled out of the pavement, just like in 2012 during the anniversary of the November pogroms in Greifswald.

Thanks to many donors, the stones were quickly replaced.

Demnig is not concerned by the fact that neo-Nazis often trample over the stones with their heavy boots. "Whoever wants to read the inscription must bow to the victim first," he says.

Turning 70, Daming certainly does not feel like stopping. He is aware of the fact that he will not be able to carry on his work forever. Nonetheless, so he has established a foundation that will continue his mission.

"No artist who works in a studio has experienced what I have experienced," he once said.

The Czech government has said it will buy a pig farm at the site of a former Nazi concentration camp. A memorial to honor the hundreds of Roma victims who lost their lives at the camp is to go up in the farm's place. (23.10.2017)