The artist Gunter Demnig has placed almost 60,000 "Stolpersteine" cobblestones across Europe. The first 50 were placed in Berlin in May 1996. Illegally. Now, it is the biggest decentralized monument in the world. 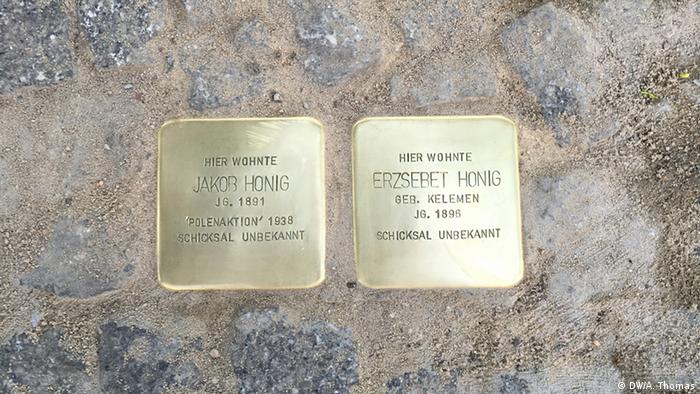 It was a beautiful sunny day in central Berlin, right in the former Scheunenviertel, which once housed a sizable Jewish population, predominantly from Eastern and Central Europe. An eclectic group had gathered - men and women, elderly and young, from Germany, Israel, the Netherlands, Canada (students on a Holocaust-study tour) and elsewhere. There was some apprehension; it was a somber occasion.

Wearing his trademark hat, Gunter Demnig arrived. He was laden with buckets of cement, his tools and two brand new, shiny Stolpersteine, commemorative stones, bearing the names Erzsebet and Jakob Honig. After a few brief introductions, he got down on his knees and started to dig a hole.

Behind the onlookers, children played in the vast, leafy empty space where once several buildings stood, housing dozens of families, many of which were forced out, perhaps later murdered in Auschwitz.

The artist was done in 10 minutes. Once the Stolpersteine were fitted snugly into the pavement, he polished them, took off his hat and got back into this van.

On the road much of the year 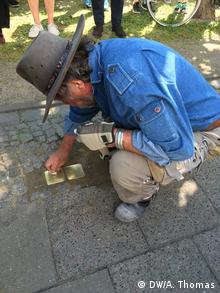 Gunter Demnig began his Stolperstein project in Berlin in 1996

In the evening, at a ceremony to mark 20 years of Stolpersteine - literally "stumbling stones" - Demnig said that he had placed the cobblestones at 17 Berlin addresses that day. This is not untypical for him. He calculated that last year he was on the road for 258 days, placing Stolpersteine in up to three villages, towns or cities a day, all over Europe.

Unimaginable in 1996, when he placed the first Stolpersteine in Berlin for 50 Jewish inhabitants of the district of Kreuzberg, as part of an artists' project examining Auschwitz. They were illegal then. There was no press, no police, no relatives, just a few curious onlookers.

Now, there are over 7,000 in the German capital alone and almost 60,000 across Europe, from Trondheim, Norway in the north to Thessaloniki, Greece in the south, Orel, Russia in the east and l'Aiguillon-sur-Mer, France in the west. They have become a familiar part of the landscape in Germany and the Netherlands. There are guided Stolperstein tours in Amsterdam, Budapest and Rome.

There are so many that Gunter Demnig no longer has time to both make and lay Stolpersteine. Since 2005, each Stolperstein has been made by hand by the sculptor Michael Friedrichs-Friedländer in his studio outside Berlin. He told DW that each is as moving as the next, but that he was particularly moved by 34 Stolpersteine he once made for 30 orphans and their four carers to be placed in front of an orphanage in Hamburg. "They were between three and five years old. I couldn't sleep for weeks."

Over 20 years, the Stolperstein project has become the largest decentralized monument in the world, a grassroots "social sculpture" that involves volunteers, students, schoolchildren and the relatives of Holocaust victims all over the world.

Contrary to popular belief, the Stolpersteine commemorate all victims of National Socialism, those who were murdered in Auschwitz and other camps of course, as well as those who survived, but also those who escaped them by fleeing to Palestine, the US or elsewhere. 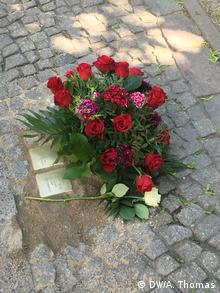 The large majority have been placed for Jewish victims, but they exist also for Roma and Sinti, for gays, for dissidents or people killed in mass euthanasia programs and for those whom the Nazis labeled "asocial".

Just this year, five Stolpersteine were placed on Berlin's central Alexanderplatz for five homeless people who were rounded up in the 1930s and sent to camps for "re-education" to become "worthy" members of society.

Stolpersteine are thus a way of showing the diversity of inhabitants in Germany before 1933 and paying homage to those who disappeared by returning their names to the places in which they led their lives. But, of course, they are also about the present. If you bow down to read the inscription of a Stolperstein, you quickly start thinking: That person was my age when he was murdered or the age of my daughter, or born the same year as my grandmother. You start to reflect, you start to wonder what would have happened to you, what would you have done if you had noticed that the family in the opposite flat had disappeared in the middle of the night. What would you do today if your neighbors disappeared? They are a way of making unfathomable figures fathomable, they are a way of making cold facts personal.

After Gunter Demnig had left the group in central Berlin, an elderly lady stepped forward to place a bunch of red roses on the two Stolpersteine. Then she talked about Erzsebet and Jakob Honig for whom they had been placed. Erzsebet was her aunt but they never met - what little she knew she gleaned from her aging mother.

Born in Budapest in 1896, Erzsebet divorced her husband one year after giving birth to a daughter. She went to Berlin in search of a job, leaving the child with her parents. She became a hairdresser and met Jakob. "They were in love." They married and once they had settled, Erzsebet's daughter was able to come from Budapest. She was sent to Palestine for her safety when the Nazis came to power. She was 16 years old. One of her sons came from Israel for the laying ceremony. He said that seeing the Stolpersteine being lowered into the ground was an incredibly moving moment.

It is unclear what happened to Erzsebet and Jakob. Their German inscriptions read "Schicksal Unbekannt" - "Fate Unknown".

Munich's city council has decided not to give the go-ahead to brass-plated cobblestones engraved with the names of victims of the Nazi regime. Although popular across Germany, some say the stones are disrespectful. (29.07.2015)

November 9-10, 1938, saw Jewish premises ransacked across Germany and thousands of men taken to concentration camps. A Kristallnacht memorial service in Leipzig has come with a warning to learn from history. (10.11.2015)

For many New York Jews, the Holocaust can not be forgiven and visiting the country of the perpatrators is unthinkable. But thanks to a program, young Jews are going to Germany and returning with some surprising findings. (22.01.2015)