COVID-19 ICU nurses at their limit

Many see doctors and other medical staff as the greatest heroes during the coronavirus pandemic. But some of them are reaching their limits, as one nurse reports from the German state of Brandenburg. 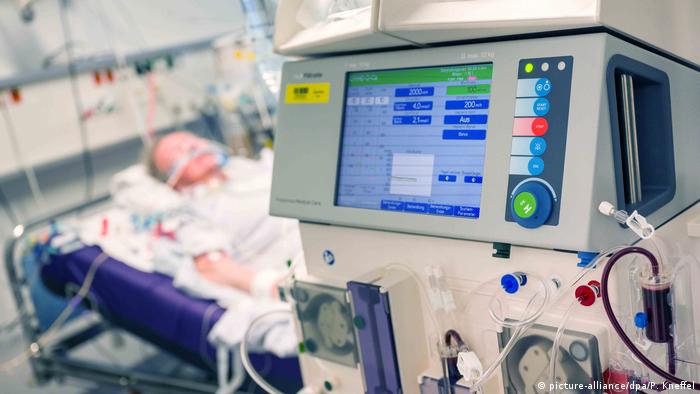 Sven Nelken (name changed) works as a nurse at a hospital in northeastern Germany, in the state of Brandenburg, which surrounds Berlin. He asked DW not to mention his real name or the town where he works.

Though he still likes his job, he said he misses support from his superiors in what is a particularly difficult period for medical personnel.

"I feel as if I haven't seen the senior doctor for days, even weeks," he said. He adds that he understands that everybody is under extreme pressure, but feels that precisely because of this, it would be good to have a little more solidarity.

"Extra shifts and overtime have just been piling up for three weeks now and we didn't even get a decent little gift at Easter. It's sad on the part of our bosses. But they probably have other things on their mind at the moment."

The ward Nelken is working on was set up only two weeks ago to deal with COVID-19 patients. He said it was all a little makeshift at first and very disconcerting. "The cupboards were all empty. The masonry is really old. There were holes in the floor and there's a draft that comes through the windows. Some of them don't even open or close, because everything is so old here," he told DW.

Despite the poor conditions, he said what is important is that all the nurses are doing their best to help the patients. However, he and his colleagues are devastated by what they witness on a daily basis.

"You can't help them," he regrets. "There simply is no effective treatment. The patients are isolated and that's really tough. Usually we're also able to offer comfort to patients, but here we're just nurses; at best, we can relieve pain."

In accordance with national restrictions, nobody apart from the staff has been able to enter the premises for weeks. "Relatives would have to wear the same apparel as us. Hairnets, bonnets, FFP2 or FFP3 masks; they would have to wear aprons, two pairs of gloves; it's just not doable," he said.

It's particularly difficult for older people who have come from care homes and are extremely lonely. "They are giving up more easily. Some were actually almost fine when they arrived, but then they started letting go. Two or three even died of loneliness," he said.

Nelken believes patients realize full well that they are part of a terrible worldwide pandemic.

"They see the news on the TVs in their rooms," he said. "One of them said to me that we had to do everything possible because he didn't want to die of this damned disease. He's still alive and he's doing well. But nobody had ever said something like that to me before."

Although Nelken and his colleagues still try to maintain as much closeness as is possible with the patients, there is not as much contact as before the pandemic. "There are some whom we wash in the morning, either in bed or in the bathroom," he said. "Others we just talk to from the doorway, asking them how they're doing."

Not only are no visitors or patients being admitted, but at the moment nobody is being discharged either, so there are a lot of confused older people who are not physically unwell but are being kept for their own protection. "They can't go back because we can't be sure that they are not COVID-19 positive and we don't want to cause another outbreak in a nursing home," Nelken said.

Germany's public health authority, the Robert Koch Institute, has issued recommendations saying that under certain conditions even people who have contracted COVID-19 can be discharged and returned to nursing homes, for example, if they can be properly isolated there and are well enough to be treated on an outpatient basis or have been free of COVID-19 symptoms for at least 48 hours. It says, however, that the procedures can be adapted to fit individual cases if there is close communication between hospitals, laboratories and the health authorities.

Nelken and his colleagues are tested once a week to see if they have contracted COVID-19. Some would prefer to be tested more often — every three days if possible. So far, none of the staff members who have contracted the disease have had any symptoms. Nelken himself is in favor of more frequent testing.

"When I read that 6,400 doctors and nurses are infected in Germany and eight have already died, it makes sense to test more," he said. "And antibody tests would also be good at some point."

The little spare time he has after all the overtime and stress is not free of worry, either. "I take a lot home with me, and we talk about it a lot there. I can still sleep through but not as well as before. I have racing thoughts — not so much about the patients, but about how things will go in general on the ward," he said.

But he's also annoyed about the behavior of his fellow citizens.

"I'm often angry about the people outside. We're supposed to be physically distancing, but when I go to work at the weekend, I see five people on a bike ride together or sitting by the water drinking beer. That really gets to me. I'd like to take them with me to the ward for eight hours so they see what's happening," he said.

Coronavirus and Germany: Why the world is looking to Angela Merkel

The German chancellor has been declared politically dead many times. But the current pandemic has boosted her reputation and popularity at home and abroad. DW explains why. (25.04.2020)