Russia has received backing from the Council of Europe's assembly to return to the body. Moscow had its voting rights suspended five years ago over the illegal annexation of the Crimean Peninsula. 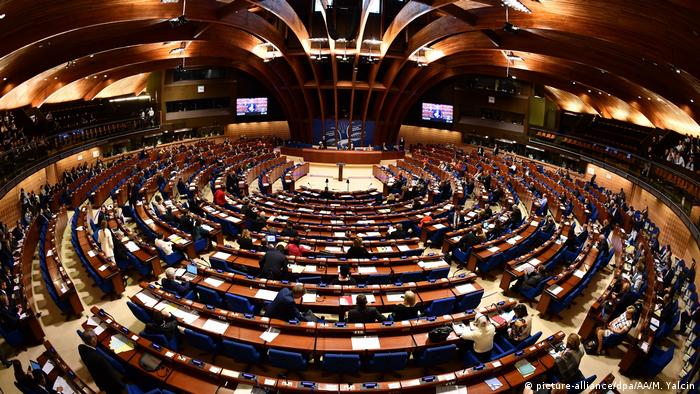 The Parliamentary Assembly of the Council of Europe has voted in favor of restoring Russia's voting rights, five years after they were revoked over its illegal annexation of the Crimean Peninsula.

In a statement late Monday, the Council of Europe said the assembly affirmed its members' rights "to vote, to speak and to be represented in the assembly and its bodies." The assembly voted 118 in favor and 62 against, with 10 abstentions.

The Council of Europe, along with its sister institution, the European Court of Human Rights, is tasked with promoting human rights and the rule of law in its 47 European member states.

The head of Ukraine's delegation, Volodymyr Ariev, said the decision sends a "very bad message" to Moscow and others. "Do what you want, annex another country's territory, kill people there and you will still leave with everything," he said.

Some observers argued that expelling Russia from the council — a leading institution for human rights in Europe — would have been disastrous for organizations operating in the country. Russia had threatened to leave if it was blocked from participating in Wednesday's vote for a new secretary general.

"The immediate impact of Russia's departure from the council would be felt most not by the Kremlin, but rather by the Russian people," said the Netherlands Helsinki Committee in a statement in December. "Russia's departure from the council would deny Russian citizens protection and justice provided by the court — worsening human rights in the country."

In 2014, Russia illegally annexed the Crimean Peninsula in an internationally condemned referendum after a contentious change of government in Kyiv. Change in the capital, coupled with Moscow's military intervention in Crimea, inflamed separatist sentiment in eastern Ukraine, triggering a rebel insurgency supported by pro-Russia forces.

However, last month, Germany and France reportedly pushed through a compromise that would allow Moscow to return to the Council of Europe. German Foreign Minister Heiko Maas said the compromise would ensure "millions of Russians the protection of the European Court of Human Rights."

Cases originating in Russia make up the largest proportion of cases brought to the European Court of Human Rights.

Human rights activists have warned of the oppressive lengths Russia is willing to go to silence its critics. They claim that when it comes to quashing dissent, the Kremlin gives security forces "carte blanche." (07.02.2019)