Could Japan cancel Tokyo Olympics over coronavirus? | Asia | An in-depth look at news from across the continent | DW | 16.04.2021

Recent comments from a high-ranking Japanese politician have driven speculation that the Summer Games could be called off. As COVID infections rise in Japan, public support for the games is dropping there. 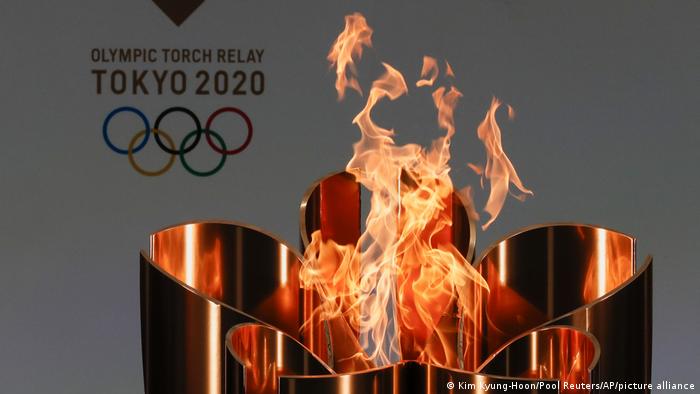 Although Japanese officials insist the games will go ahead, many doubts persist

One of Japan's most influential political leaders on Thursday had to walk back comments he had made about canceling the Tokyo Olympic Games if the coronavirus pandemic cannot be brought under control.

The damage had already been done, however, and the comments by Toshihiro Nikai — secretary general of the ruling Liberal Democratic Party — indicate that discussions are taking place behind the scenes for a potential course of action should a worst-case scenario come to pass.

"If it seems impossible to go on with the games, they must definitely be canceled," Nikai said in an interview with Japan's TBS television station.

"If there is a surge in infections because of the Olympics, there will be no meaning to having the Olympics."

Asked to clarify whether that meant canceling the Games with less than 100 days to go before the July 23 opening ceremony, Nikai replied, "Of course."

Games still on — for now

Earlier, Nikai had released a written statement in which he said there has been no change in the party's official policy that the games will go ahead, and that the priority is to ensure all those involved remain safe and secure.

In a press conference in Tokyo on Friday, Tokyo 2020 President Seiko Hashimoto attempted to play down Nikai’s comments, claiming that they merely indicated he is "concerned" about the event.

"The fact that he is concerned is a point that we need to take seriously and make sure that we can deliver a safe and secure games," she said.

"His comments remind us how important it is for us to feel confident and fully prepared to deliver the games so consumers can feel reassured that the games are safe."

The discussion timing is unfortunate for organizers who have been keen this week to play up the 100-days to open countdown milestone passed on Wednesday.

Infection numbers have once again begun to climb in what is the fourth wave of the pandemic to hit Japan.

There were 4,576 new cases of the virus across the Japan on Thursday — the second consecutive day that number were above the 4,000 threshold.

Tokyo saw 729 new infections, marking the first time the figure has risen above 700 since February 4. Nationwide, there were 35 deaths, bringing the total official death toll to 9,506.

Alarmingly, the UK variant of the virus — which was first detected in western prefectures in January and is more infectious than the original strain — appears to have taken a firm hold in Tokyo, accounting for nearly 48% of all cases.

Infections have risen rapidly since early April, and are increasingly sickening younger people, who were more resistant to the original strain.

"Clearly, the mutation is spreading fiercely," said Tokyo Governor Yuriko Koike, who on Thursday called on people not to travel into the city unless they are medical or other essential workers.

She has also requested that companies encourage staff to work from home in order to bring the number of commuters into the city down by 30%, while restaurants and bars are subject to a strict curfew.

To compound the problem further, just 2 million doses of the coronavirus vaccine have been administered so far in a nation of 126 million people, with elderly pensioners only receiving their first doses from the beginning of this week.

Japan's handling of the vaccine lags well behind most other advanced nations and has been the target of fierce criticism, with more than 70% of the population polled this week saying that the government’s response had been inadequate.

Given the scale of the challenges as the Olympics draw closer, it is perhaps not surprising that Nikai has reservations, said Yoko Tsukamoto, a professor of infection control at the Health Sciences University of Hokkaido.

However, Tsukamoto believes Nikai should have kept his concerns to himself.

"I get the impression that he just said what came into his head without really thinking of the implications," she told DW.

"But there must be discussions going on within the party about what happens if the situation continues to get worse and the risk of going ahead with the Games is just too great. He is just saying that out loud."

Tsukamoto admits to having serious reservations about the games herself — but says that if the government is utterly committed to going ahead, then it needs to do a better job of communicating more specific plans.

She mentioned seeing a recent statement from the organizers about every athlete taking part in the Games having a PCR test every day — "but there was no explanation of how that was going to happen beyond the promise being made," she said.

"The government needs to make it absolutely clear how they are going to keep us all safe if they want the public to support them," she said.

"As a medical professional, I believe we should have the knowledge and capability to successfully stage the games in spite of the pandemic, but we are not getting that message across,"she added.

A poll conducted by Japan's Kyodo news agency released on Monday showed that 39.2% of Japanese people believe the Olympics and Paralympics should be canceled outright.

A further 32.8% said they think it should be delayed again. Just 24.5% replied that the games should go ahead as planned

The new Japanese leader now has sufficient political clout to revise the country's constitution — a long-held ambition of former Prime Minister Shinzo Abe, who was shot dead during the election campaign.