It's 100 days until the postponed Tokyo Summer Olympics. However, COVID-19 numbers are on the rise in some places and athletes due to compete in Tokyo feel that they and their concerns are not being taken seriously.

100 days to go until the Tokyo Olympics

"I was totally relieved and really wanted to get out of my apartment," saber fencer Max Hartung told DW. The 31-year-old was finally able to leave after completing 10 days of quarantine and testing negative for COVID-19.

Hartung had been forced into quarantine after four of his teammates tested positive for COVID-19 following the Fencing World Cup in Budapest in March.

The fencers became infected even though the organizers had implemented what they had thought to be an effective hygiene plan.

"We placed our trust in the organizers," Hartung said. "Even more disappointing was the fact that the even the additional protective measures we had taken were not effective."

It's not just the Fencing World Cup that has seen mass infections. At the European Athletics Indoor Championships in Torun, Poland, 50 of the 7000 participants tested positive. 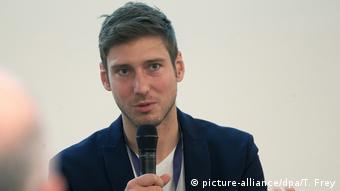 Max Hartung doesn't believe the Olympics will be fair

One hundred days before the Tokyo Games are scheduled to open, the renewed rise in the number of infections in Europe is causing concern within the German Olympic team, said Hartung, who has served as the German athletes' spokesperson since 2017.

"We had all hoped that the spring would be better and that the first competitions would be different. The fact that there are now increased reports of infections again worries many."

Thomas Bach: There is no 'plan B'

Such concerns, said Hartung, means that there is little sign of the eager anticipation among the athletes that you would expect before a "normal" Olympics. Not just that, but there are still major uncertainties about the hygiene plan for the Tokyo Games.

"We have at this moment, no reason whatsoever to believe that the Olympic Games in Tokyo will not open on July 23 in the Olympic Stadium in Tokyo," International Olympic Committee (IOC) President Thomas Bach told Kyodo News, adding that for this reason, there was no "plan B." The reason the 67-year-old is pushing for the Games to go ahead may be primarily financial, as they promise to bring the IOC billions in revenue.

It can't come quicly enough. The postponement from 2020 to 2021 and the costs for the COVID-19 hygiene plan have driven up the bill to at least €2.3 billion ($2.74 billion). The local organizing committee expects to spend around €12.66 billion, with €760 million alone earmarked for the hygiene plan. But is that enough?

Norio Sugaya, an infectious disease expert at Keiyu Hospital in Yokohama says the Games should be canceled.

"The risks are great in Japan," the expert said. The country is "not safe at all."

The playbook doesn't say much

Is financial gain more of a priority than the health of the athletes? Quotes like Sugaya's will not make competitors feel any easier about the situation. 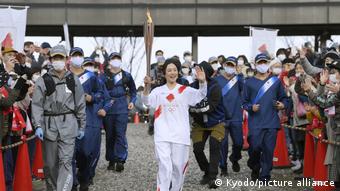 "There's no way I'm going to trust blindly. Along with our association 'Athletes for Germany', I want to form my own opinion and question the concepts," explains Hartung. But that is not easy at the moment, he says, because almost no information has been made available to athletes.

"The first playbook [hygiene guide for participants] doesn't yet say much about what it will look like on the ground in terms of training times or catering. Just three months before the Games, I would have liked us to have more details and also to have more say, but we haven't had that chance yet. I hope we will get more information and we can get a better picture of the situation, so that we can then hopefully travel to Japan."

The fencer considers it pivotal for the athletes to participate in the hygiene concept. Hartung says experts for viral diseases have to work on the concept, but athletes can offer advice on what is necessary to guarantee fair competition.

Hartung: ‘It will definitely be unfair'

Fair competition? The current difference in ability to train alone make fair competition in Tokyo almost impossible. In addition, some athletes are already vaccinated, but others are not. "It's a huge advantage to be vaccinated. But time to do it is running out," Hartung says. 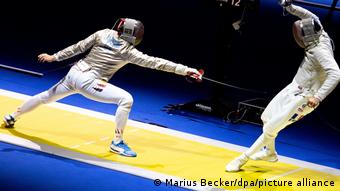 Max Hartung is both a fencer and an athlete activist

Still, the question of equal opportunity must be asked. After all, athletes who have already been vaccinated can train normally and prepare for the competitions in Tokyo in a completely different way, while others have significantly higher hurdles to jump.

"It's definitely going to be unfair," Hartung says. "Not everyone is as fortunate as I am to have already been vaccinated as a contact of a high-priority person. Whether you can perform and be protected in Tokyo should not be left to chance. I hope vulnerable groups are vaccinated quickly and then my teammates can be vaccinated."

100 days to go until the Tokyo Olympics