Coronavirus: Wacken heavy metal festival called off due to outbreak

Wacken organizers said it was with "heavy hearts" that they had to cancel the world's largest metal festival this year. Rock am Ring, Hurricane and other music festivals also called things off due to Germany's event ban. 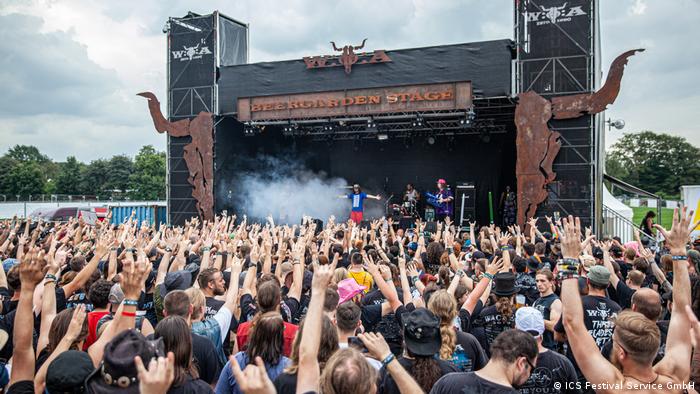 With Germany banning major public events until August 31 due to the COVID-19 outbreak, organizers of Wacken Open Air and other music festivals announced on Thursday that they were canceling this year's events.

"It is with heavy hearts that we have to announce that there will be no Wacken Open Air this year," organizers said in a statement.

The statement added that organizers were "bitterly disappointed" that the festival couldn't take place as planned this year and that the team "will need some time to process the bad news." Wacken was due to run from July 30 to August 1.

Organizers emphasized, however, that they supported the German government's decision to ban major events in a bid to minimize the spread of the coronavirus.

"Stay healthy — In Metal we trust!," the statement concluded.

Wacken Open Air is the world's biggest heavy metal festival, with 75,000 fans normally attending the multi-day event in the northern Germany village of Wacken. The festival celebrated its 30th birthday in 2019.

Organizers for the popular "Rock am Ring" and "Rock im Park" festivals said they rescheduled their events for next June in the hopes that the situation will be better by then.

They said that the decision was "of course disappointing" for the bands and the 175,000 who attend the festivals, which take place at the Nürburgring race track and in the city of Nuremberg respectively. The simultaneous festivals were due to run from June 5-7.

The Hurricane Festival, which takes place in northern German town of Scheessel and draws around 80,000 fans, also canceled its festival this year.

"This shadow has been looming over us for weeks, but now it is upon us. And it hurts, it hurts really bad," Hurricane organizers said in a statement.

Metal Battle in Wacken: An Theos