German Chancellor Angela Merkel has told party colleagues that existing COVID measures will not get Germany through the winter. Some states are going further than others in how they deal with the pandemic. 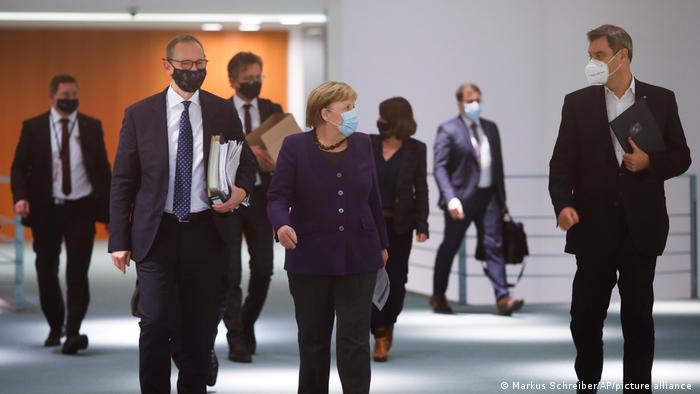 Merkel said regions with high coronavirus rates needed to tighten social contact restrictions before Christmas, according to sources at a CDU meeting.

The country was in a "very difficult situation" and that it would not be able to "get through the winter" with current measures, sources were reported as saying.

"We will not get anywhere on the principle of hope," Merkel was quoted as having said. She was also reported to have complained of "too much talk about mulled wine stands... and too little talk about nurses and carers."

Germany has seen infection levels remain at a high level for more than a month, despite being hailed as a good example in how it dealt with the pandemic earlier this year.

Read more: Coronavirus  Germany is no longer a role model

Merkel's spokesman Steffen Seibert had earlier welcomed a move by Bavaria on Sunday to step up its shutdown rules. The state government in Munich has also said it will limit New Year's Eve gatherings.

"These are worrisome days," Seibert said, noting that infection rates were "not consistently going down" but rather rising in some areas. He said Germany was "far from turning the corner."

"It is obvious and also necessary for individual states to think about which measures they could use to curb new infections," he said, calling Bavaria's planned tightening from Wednesday "good and right."

However, Thuringia State Premier Bodo Ramelow of the Left party is against new consultations before the holidays.

"We have regulations until January 10, 2021," he told the Frankfurter Allgemeine Zeitung. "Everyone knows what to do."

Merkel and the state leaders agreed last week to extend current restrictions until January 10. Cultural and sporting facilities as well as restaurants and bars have been shut since early November. Schools and shops remain open. Exceptions are in place for gatherings at Christmas and New Year of up to 10 people.

The eastern state of Saxony has announced it will meet on Tuesday to agree stricter rules. The premier of the state of Hesse, Volker Bouffier, warned of possible night-time curfews.

The German federal system means that states have leeway to set their own rules, making any coordinated action from the top more complicated.

Austria has scaled back its second lockdown of the coronavirus pandemic, but restaurants, bars and hotels remain closed. Hopeful skiers will also have to wait, as arrivals from high-risk countries need to quarantine.

Opinion: Europe can only beat coronavirus together

With the UK set to begin its mass COVID-19 immunization, British politicians have hailed the early vaccine approval as a Brexit success. But Barbara Wesel thinks they're telling blatant lies to claim undeserved credit.