Coronavirus: Japan confident it can overcome hurdles to host Olympics | Asia | An in-depth look at news from across the continent | DW | 03.02.2021

Coronavirus: Japan confident it can overcome hurdles to host Olympics

As Japan's vaccination program gets underway and infection numbers sink, health authorities are increasingly optimistic that the postponed Tokyo Summer Olympics can be salvaged. 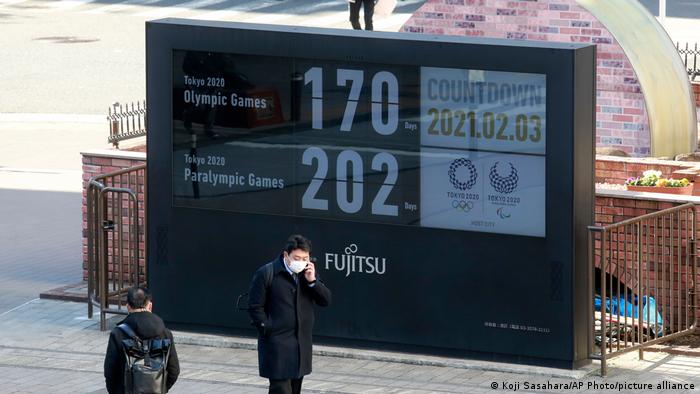 The countdown is still on for the 2020 Tokyo Olympics

Japan's government and organizers of the postponed Tokyo 2020 Olympics are adamant that the event will open on schedule on July 23.

Japanese health experts are also confident that the worst of the coronavirus pandemic has passed.

However, Japan's coronavirus vaccination drive has yet to begin. The logistical challenges are piling up. There is little discussion of the added costs for hosting the Tokyo Olympic Games or who will foot the growing bill. Public opposition is hardening.

Prime Minister Yoshihide Suga announced on Tuesday evening that the state of emergency that was scheduled to expire on February 7 will be extended for one more month in 11 prefectures.

Nevertheless, Japan has so far managed to avoid strict lockdowns similar to those introduced in Europe and other parts of the world.

Japanese have been "urged" to avoid crowds, eating out in groups and unnecessary travel, while bars and restaurants have been asked to close by 8 p.m.

And Japan has been relatively less affected by coronavirus compared to other countries.

The latest figures from health authorities report 394,799 total cases of coronavirus, the vast majority in the big cities of Tokyo, Osaka and surrounding commuter prefectures. There were 119 deaths from the disease on Tuesday, bringing the total number of fatalities to 5,965.

All of this has been sufficient to install new belief that the worst may be over and that the Olympics can be salvaged.

"The figures that we have indicate that new infections peaked in mid-January and are now very gradually declining," said Kazuhiro Tateda, president of the Japan Association of Infectious Diseases, and a member of the expert committee set up by the government to combat the spread of the virus.

"We were seeing 2,000 new cases a day in Tokyo at the beginning of January, but now that number is down to around 500 a day, and I expect that decline to continue as a result of the state of emergency being extended and people being encouraged to stay at home," he told DW.

"We are also about to start vaccinations, which will also have a positive impact, and temperatures are also rising with the first signs of spring, which we believe will also have a good effect on infection numbers," he added.

A potential fourth and even a fifth wave of infections is likely to be smaller than previous waves, although Tateda admits there are problems that will still need to be overcome before the virus is completely defeated.

"The biggest concern has to be the logistics of delivering and storing a vaccine that has to be kept at very low temperatures to be effective," he said.

Japan may have relatively low infection rates for a nation of 126 million people, but it is the last major industrial country to commence mass vaccinations, and there are fears that the rollout of the drugs will be delayed by a shortage of freezer units.

At present, the government plan calls for medical workers to receive vaccinations first, but that will not happen until the end of February. Health authorities will then need to vaccinate around 850,000 people a day if they wish to meet the target of half the population before the Olympics commence.

That may not be possible in more remote parts of the country and where overworked medical staff are complaining of exhaustion.

Yet that is what the government and organizers are working toward.

Asked about the Olypmics in a press conference on Monday, Prime Minister Suga said, "I would like to work towards a safe execution of the games, while keeping in mind the domestic and overseas situation of COVID-19 in mind."

Yoshiro Mori, the president of the Japanese organizing committee for the games, was more bullish in his assessment, insisting that the event will go ahead "however the coronavirus evolves."

"We must go beyond discussion of whether we will hold it or not," Mori told a meeting of government officials and organizers. "It's about how we will do it. Let's think about a new kind of Olympics on this occasion."

Despite official confidence that the Olympics and Paralympics can go ahead, many Japanese are still skeptical.

A recent poll showed that 80% of people believe that the continued spread of the virus and the lack of time for the vaccine to be delivered mean that the Olympics should be either delayed for another year or canceled entirely.

"I do not understand why they want to have the Olympics," said Mari Miyamoto, who works in an office in Tokyo.

"We are constantly being told that we cannot meet up with other people or see friends and family, that we have to always sanitize our hands and be careful whenever we go out," she said.

"But now they insist that it's perfectly safe to hold an event that is going to bring thousands of people together in a confined space. To me, that makes no sense."

Yet others are more optimistic, with Yoichi Shimada, a professor at Fukui Prefectural University insisting that the government is right to push ahead with an occasion that the entire world will be watching.

"To cancel the games at this late stage would cause chaos and be terribly expensive," he told DW. "The authorities have already been carrying out tests at baseball stadiums and sumo tournaments, so they are learning about how to control crowds and keep everyone safe.

"I agree with the prime minister's comments that Japan can use the games to show that the world has defeated the virus and that it will serve as a milestone in the fight against coronavirus," he said. "A successful Olympics will bring renewed hope to the world."