Coronavirus: How Belgium′s breweries are adapting to lockdown | Europe | News and current affairs from around the continent | DW | 26.04.2020

Some Brussels-based breweries have started home delivery services to stay in business. It's proving quite successful, but psychologists warn against excessive alcohol consumption, as Marina Strauss reports.

Brown bottles trundle along the conveyor belt. One by one, a machine fills them with beer. Then, the bottles are sealed with cap and labeled. This is the small En Stoemelings brewery, located in one of Brussels' industrial zones.

Keeping a safe distance, En Stoemelings co-founder and boss Samuel Languy leads me past brewing kettles, wood pallets and stacks of square cardboard boxes — each containing 24 bottles, ready to be delivered to Belgians self-isolating at home, yet thirsty for a fresh, cold brew. 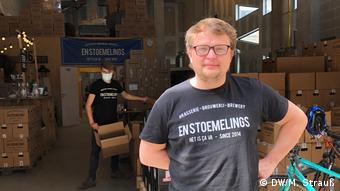 Despite the pandemic, business is booming for En Stoemelings and co-founder Samuel Languy

Since the Belgian government imposed a shutdown in mid-March to tackle the coronavirus pandemic, bars, cafes and many other businesses have closed down.

The measure dealt a severe blow to  Languy and his team, who depend on selling their beer to Belgian establishments. The lion's share of his company, 90% in fact, relies on sales to bars, restaurants and the like.

"We didn't know what do to," he tells me as we relax on a bench outside the brewery in the balmy April sun. He faced the prospect of having to fire all his employees and halt beer production for the foreseeable future.

But that same day, Languy filled up his car with crates of beer and started delivering it to friends and acquaintances. It was an instant success, he said. "Since they suddenly had to stay at home, one of the first questions was — we are in Belgium, after all — 'where can I get my beer?'"

Languy then set up an online shop and started having his brews delivered to customers via bike couriers. He's not the first one to think of this. Many other Belgian drinks and foodmakers have also begun delivering their products to people cooped up at home.

Today, Languy's business is thriving. His En Stoemelivery delivery service — with its Belgo-English moniker — is a hit, his employees are back at work and production has resumed to keep up with demand. In fact, he tells me, he's making as much money as he did prior to the lockdown.

Languy's success is in no small part thanks to the current craft beer hype that's swept over Belgium, a country well known for its beer culture. Craft beer is all about small, local breweries inventing creative new beers and competing with the major breweries dominating the market. 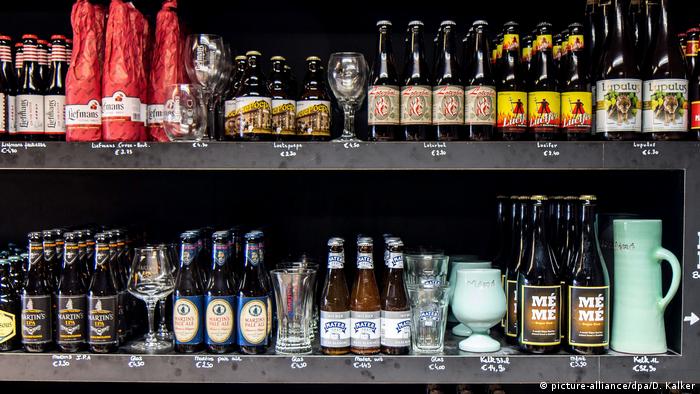 Languy's creations don't come cheap. A box of 24 bottles will set you back €45 (about $49), with bike delivery costing an additional €10. But, he tells me, his customers are happy to pay up "because they know it is keeping our team, and the courier service, employed."

Belgians are so eager to get their hands on a cold drink that some have started purchasing vouchers for their favorite watering holes. Fundraising initiatives like Café Solidarité and Café Courage let Belgians purchase vouchers for beers or other drinks of their voice, which can then be redeemed once the lockdown is over.

The Café Courage scheme was launched by AB InBev, the world's largest brewing company, which is based in the Belgian city of Leuven. It has not disclosed to which extent the lockdown has harmed its business, but said in an email that "practically every industry is affected [by the situation], and the beer industry is no exception."

Even though Belgian supermarkets have recorded a rise in alcohol sales since the lockdown began, as the country's daily Le Soir reports, beer brewers are nevertheless missing out on revenue usually generated from sales to bars, restaurant and other establishments.

Psychologist Emilia Bogdanowicz says some people have even cut back on their alcohol consumption amid the pandemic. One reason, she explains over the phone, is that "there are fewer social gatherings." And, she adds, it's now more difficult to drink in secret. With families cooped up at home, it's tricky to drink without anyone noticing. And some people are using these unusual circumstances to live more healthy lives and cut back on alcohol.

But there's a flip side. Bogdanowicz works for Le Pelican, a Brussels institution that councils people with alcohol addictions, which has seen more people than usual contact the organization for help in recent times. She believes this may be because many other institutions have shut down. And because individuals self-isolating at home, who might have a rocky relationship with their partner or family, may turn to drinking.

Brewery boss Samuel Languy is well aware of the risks linked to alcohol consumption. "We all know people who are drinking too much these," he says, adding that "some people joke around, telling us we're producing legal drugs — and they are right."

Even so, many have expressed their gratitude, and how much they appreciate a refreshing beer in the safety of their own home.

Did authorities in Lombardy get it badly wrong? There are allegations that mismanagement at retirement homes caused hundreds of deaths and that authorities failed to provide adequate guidelines for hospitals and doctors. (21.04.2020)

Due to the Covid-19 pandemic, the world’s largest public festival was cancelled in 2020 and 2021. This year, the "Wiesn" is open to visitors again. Are you going? What do you like most about Oktoberfest?

Almost 160 million liters more beer were consumed in the first six months of 2022 when compared with the same period in 2021. However, data shows consumption is still down on pre-pandemic levels.