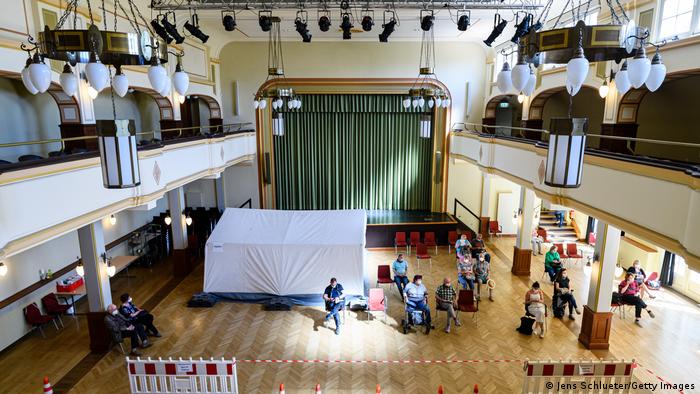 Germany will remove the priority limits on who can receive a coronavirus vaccine from June 7, Health Minister Jens Spahn announced on Monday.

Until now, only people listed as priority groups were eligible to receive most vaccines. Priorities were ranked by age, medical conditions and profession. However, from June 7 onwards, the entire population from aged 16 up will be eligible for vaccines.

The new rules will apply to vaccine centers, doctors' surgeries and company doctors.

Vaccine supply is still limited in Germany, so despite the dropping of prioritization, Spahn appealed for continued patience as people wait for an appointment.

Vaccinations were likely to continue "well into the summer," Spahn said, with no chance of completing the process in June.

How is the vaccination campaign going?

Germany just administered its 40 millionth vaccine dose. Some 37% of the population have received at least one dose, and 11.2% are fully vaccinated against COVID-19.

About 15 million people are scheduled to receive their first or second vaccine dose before June 7.

Spahn said that authorities were already discussing when and how adolescents between the ages of 12 and 16 could be vaccinated. The European Union drug regulator hopes to approve the BioNTech/Pfizer vaccine for use in children as young as 12 in June.

How have doctors reacted?

The German Association of General Practitioners said there were still great challenges for practice staff, who are already overrun with requests.

"It is understandable that everyone now wants to get their turn as quickly as possible, but I appeal to patients: Be patient," Chairman Ulrich Weigeldt told the Rheinische Post.

The chairman of the German Foundation for Patient Protection, Eugen Brysch, said the priority dropping should be determined by vaccination progress rather than being set by an arbitrary date.

Infection rates have been steadily falling in Germany, with 83.1 new cases per 100,000 residents being recorded every week.

"We have not yet achieved the conditions to enjoy as relaxed a summer as last year," he said. He said infections must be significantly further reduced. At this time a year ago, early in the pandemic and after a notably mild first wave in Germany, the nationwide seven-day incidence was 5.

The president of the German Medical Association, Klaus Reinhardt, has said Germany looks to be on the "long home stretch" back to normality. Lawmakers are also preparing to allow greater freedoms for vaccinated people.

DW science correspondent Derrick Williams explores the question of how long vaccination defenses remain robust, and whether they will need to be updated as the virus continues to evolve.