A German military plane carrying citizens escaping the coronavirus in China has touched down in Frankfurt. Countries around the world are taking action to protect citizens as cases increase. 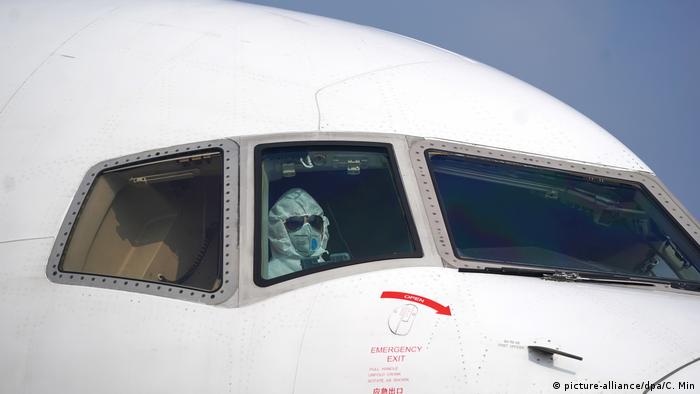 The flight suffered delays earlier in the day after it was blocked from stopping in Russia for crew-change and refueling.

Moscow refused to allow the plane to land due to "lack of capacity" at the airport, and the Airbus A310 had to be diverted to Helsinki instead.

A German Ministry of Health official said the plane was carrying 110 German citizens, according to the DPA press agency. Doctors were also on board to monitor the passengers.

The returnees are to be quarantined for two weeks at an army barracks near Frankfurt Airport. None of the German citizens who are to be repatriated are suspected of having contracted the virus, according to Germany's Foreign Ministry.

Germany has confirmed eight cases of the virus and has advised against nonessential travel to China.

How widespread is the outbreak?

The World Health Organization (WHO) on Thursday declared the coronavirus outbreak a global emergency.

As of Saturday, the number of infections worldwide is nearing 12,000, with the vast majority of cases in China. Chinese authorities said Saturday the number of deaths in the country is currently reported at 259.

How is the world responding to coronavirus?

Outside of China, more than 120 people are estimated to have contracted the coronavirus in about two dozen countries across the globe.

Europe: Portugal said Friday it was sending a plane equipped with medical staff to China to evacuate EU citizens.

Italy has declared a state of emergency in response to the first confirmed cases and has suspended flights to China. Sweden and Spain reported their first cases Friday.

The UK confirmed its first case of the coronavirus on Friday. The UK government chartered a flight from Wuhan carrying 83 British citizens and 27 other foreign nationals to an airport in central England. Britain also said it would withdraw some staff from its embassy and consulates in China.

Russia's air force is expected to begin evacuating Russian citizens from China's most affected regions early next week, according to news agencies. Russia has also announced it will halt visa-free travel for tourists to and from China and temporarily stop issuing work visas to Chinese nationals.

US: On Friday, the US declared a public health emergency and said it would bar entry to foreign nationals who have visited China within the past 14 days. Any US citizens returning from Hubei province are required to be quarantined for 14 days. The US has so far confirmed eight cases.

On Saturday, the Pentagon approved a request to make military facilities available to accommodate 1,000 people arriving from overseas who may need to be quarantined.

Australia: On Saturday, Australia said it would begin denying entry to non-citizens arriving from China. Ten cases have been confirmed in Australia.

South Asia: India evacuated more than 320 of its citizens from Hubei Saturday and placed them under quarantine in New Delhi.

Southeast Asia: Vietnam suspended all flights to and from China Saturday. Singapore barred arrivals and transit passengers from mainland China on Friday.

East Asia: China's northern neighbor Mongolia implemented a ban on arrivals from China on Saturday. South Korea has chartered two flights evacuating hundreds of its citizens from the Wuhan region.

China: Over the past two weeks, China has locked down the city of Wuhan and quarantined other cities in much of Hubei province. The transport lockdown affects an estimated 50 million people in the region.

On Friday, the Chinese government chartered two flights bringing residents of Wuhan back to China from Malaysia and Thailand.

China's Hubei province is a major manufacturing center for international companies. Along with Apple, plants run by the beverage company AB InBev and carmaker General Motors have temporarily suspended production due to the outbreak.

China plays a key role in global supply chains and experts warn the coronavirus outbreak could have a knock-on effect on the global economy. Economists are projecting a slowdown in China's first quarter growth due to the virus.

On Saturday, the People's Bank of China said it would lower lending rates to support companies affected by the outbreak. China's Finance Ministry also announced tax exemptions for imports of products related to curbing the outbreak.

Tech giant Apple said Saturday it would temporarily close all of its official stores and corporate offices in mainland China.

The company said in a statement that it would close its stores in China until February 9 "out of an abundance of caution and based on the latest advice from leading health experts."

China is Apple's third-biggest consumer market and home to much of the company's supply chain. Many suppliers are based near Wuhan, a major manufacturing hub and the city where the outbreak began.