New Zealand's stricter rules have put a pause on the prime minister's wedding plans, but Ardern said other people faced far greater hardships. Beijing has ramped up testing ahead of the Olympics. DW has the latest. 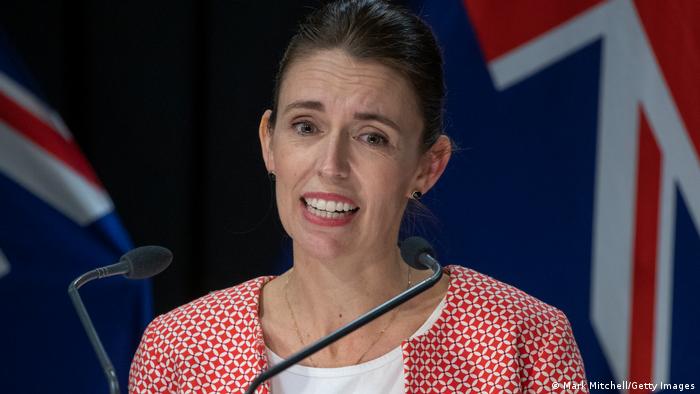 Prime Minister Jacinda Ardern said she was postponing her wedding on Sunday, as New Zealand imposes new restrictions to curb the spread of the omicron variant of the coronavirus.

The exact date of Ardern's wedding to partner Clarke Gayford had not been disclosed, but it was rumored to be imminent.

She told reporters that she was no different from other New Zealanders, and that thousands of others "have had much more devastating impacts felt by the pandemic." She went on to say that the "most gutting" of those experiences could be the "inability to be with a loved one sometimes when they are gravely ill."

"That will far, far outstrip any sadness I experience," she added.

The new restrictions went into effect starting at midnight on Sunday. They include tighter mask rules and limited gatherings in public settings, especially for places that aren't making use of vaccine passes.

The restrictions come after a cluster of nine omicron cases of the virus confirmed fears of community transmission of the infection since it was first detected among family members who returned to the South Island after attending a wedding in the North Island earlier this month. A flight attendant also tested positive.

New Zealand's borders have been shut to foreigners since March 2020, and the government also pushed back plans for a phased re-opening from mid-January to the end of February. About 94% of New Zealand's population over the age of 12 is fully vaccinated and about 56% of those eligible have had booster shots.

China's capital city, Beijing, ordered more COVID-19 tests on Sunday as it prepares to test nearly 2 million residents of a neighborhood where officials identified a cluster of coronavirus cases. Beijing, which detected some 30 infections this week, is on high alert as the city prepares to welcome athletes and others for the Winter Olympic Games that kick off February 2.

Germany reported 85,440 new COVID cases and 54 deaths from the coronavirus infection on Sunday. The country's weekly incidence rate on Sunday rose to 806.8 infections per 100,000 people, which marked the highest ever incidence rate recorded so far.

German Health Minister Karl Lauterbach told the Bild am Sonntag newspaper that the government would launch a "more creative" and broader vaccination campaign, which would include posters, radio and TV spots, starting next week. "We have a duty to reach people," Lauterbach told the newspaper. The new campaign is also set to roll out in several languages, as well as target older people and rural areas.

The pandemic has dealt huge economic damage to Germany's economy over the past two years, according to an analysis by the Institute of the German Economy (IW). The loss of value-added has amounted to €350 billion ($397 billion). Much of the losses were attributed to falling private consumption, partly due to lockdown measures.

Russia on Sunday broke its infection record for a third day running, reporting 63,205 cases, compared with 57,212 on Saturday and 49,513 on Friday. The capital, Moscow, which is the worst-hit city in the worst-hit country in Europe, registered 17,528 infections, also a record tally for the fourth day in a row.

Belgium experienced another protest against coronavirus curbs on Sunday, with thousands marching through the capital, Brussels. The protest came as the omicron variant causes infections to reach record highs in the country.

Some banners at the protest carried slogans slamming vaccination passes. These documents allow the holder to enter venues that are off-limits to the unvaccinated.

Despite the high infection  numbers, the health care system in Belgium has not come under the same strain as during previous pandemic waves both because omicron tends to cause less severe disease and because the country has a high vaccination rate.

The latest from DW

For those who are afraid of needles, but want to get a COVID jab, relief could be coming soon. DW's science team took a look at the current research efforts underway to turn coronavirus vaccines into nasal sprays. "It is much, much cheaper to produce this vaccine as compared to the mRNA vaccines by Pfizer and Moderna," Peter Palese, the head of microbiology at Mount Sinai Hospital's school of medicine, told DW.

In Germany, people have become used to staying home and eating at home. The owners of bars and restaurants say their business is all but dead. DW's Sabine Kinkartz spoke with hard-hit restaurant owners about the struggle to remain open in the face of an ever-changing pandemic.

COVID-19: The coronavirus pandemic is far from over

Some countries are reporting more new coronavirus infections compared with the previous two weeks. Global data trends show that the pandemic isn't over yet. DW sums up the current situation in three charts.

Only 29% of people in Bulgaria are fully vaccinated. Half the population is determined not to get the vaccine. The omicron wave confronts the country with serious challenges.