Only 29% of people in Bulgaria are fully vaccinated. Half the population is determined not to get the vaccine. The omicron wave confronts the country with serious challenges. 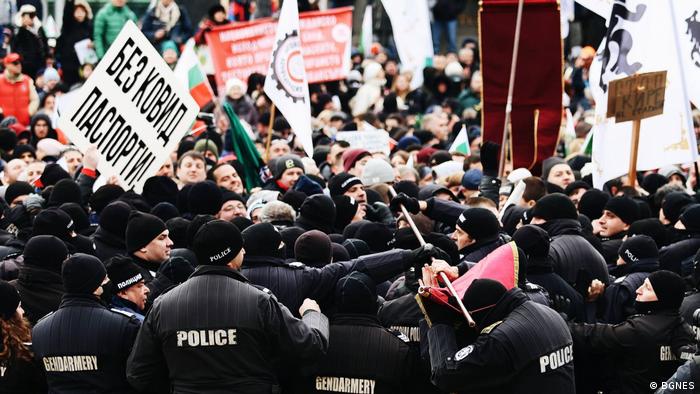 "No COVID passports!" Protest against COVID measures in Sofia

The statistics are grim: Bulgaria has the EU's highest death rate, per million of population, from COVID-19. Excess mortality in the country is higher than almost anywhere else in Europe.

Yet the majority of Bulgarians are still unwilling to get the vaccine. The country has the lowest vaccination rate in the EU — it's estimated that just under 29% of the population is fully vaccinated. There are constant, ongoing demonstrations in Bulgaria by anti-vaccine residents, with the result that, right now, the southeastern European country seems to be losing the battle against COVID-19 and the omicron wave.

Hundreds of citizens gathered on the square outside the Bulgarian parliament in Sofia on January 12 to protest against the so-called "green passport." Introduced in Bulgaria in October 2021, it serves as a proof of vaccination, recent recovery from COVID-19, or a recent negative test. People are required to show a green passport to gain entry to restaurants, bars and shopping malls. Many also need it to be allowed to work. 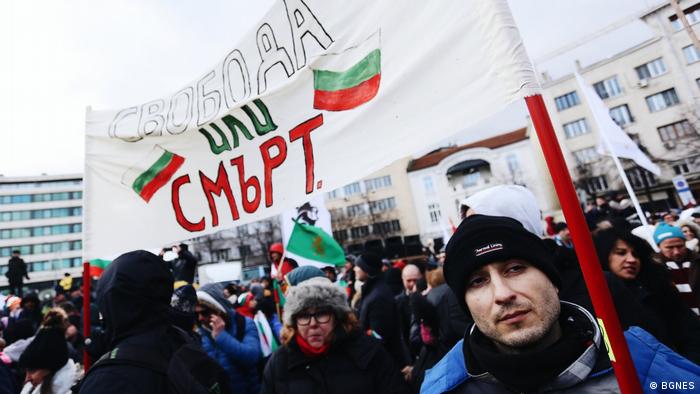 "Freedom or death": Protesters in Sofia demonstrating against COVID measures

At the protest, one demonstrator gave a speech that later went viral on the Internet and social media. "I won't say my name, otherwise those who sit in parliament will persecute me," she shouted. "I studied biology for six years, so I know that the vaccines against coronavirus aren't vaccines at all! They're experimental cocktails that contain a chip and things that destroy our freedom. They're controlled by 5G systems. Nobody should get vaccinated!"

Like most protesters, the woman is a supporter of Vazrazhdane ("Revival”), a nationalist, COVID-skeptic party that made it into parliament for the first time in last November's election - with almost 5% of the vote.

The mathematician Petar Velkov has often taken part in televised debates with members of Vazrazhdane, and other COVID-19 deniers and vaccine skeptics. He's trying to convince his compatriots of the need for vaccination. It's a difficult task. 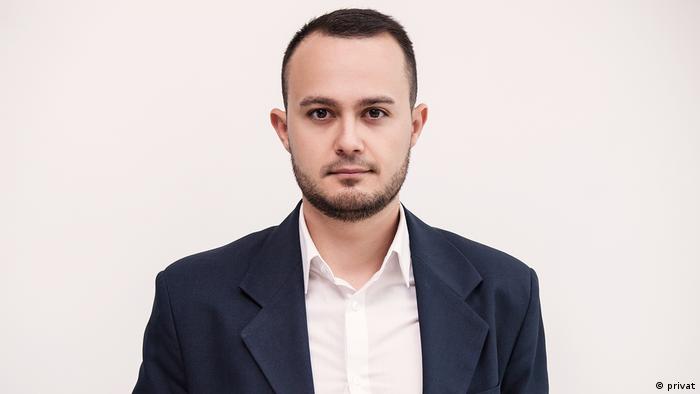 'If a person cannot process the available information, he cannot assess the risk' - mathematician Petar Velkov

"In other countries, vaccination and protective measures against the new wave have given medical professionals a much-needed break, with hospitalizations and deaths remaining at a relatively low level. This has not been the case in Bulgaria," Velkov tells DW. He explains that the new omicron wave is hitting the country at a point when the health system is already under extreme pressure.

"In Bulgaria, when the new wave started, we were seeing about five to six times as many hospitalizations as at the start of the previous waves. That's why intensive care units are already struggling."

'Anti-vaccine' parliamentarians get the jab

Despite current record infection levels and the high mortality rate, many Bulgarians still believe the COVID-19 vaccine is more dangerous than the disease itself. "Fewer than 30% of adults in Bulgaria are vaccinated," Dimitar Ganev, an opinion pollster with the Trend research institute, told DW. "There are 20% that are not vaccinated but intend to get the vaccine. And about 50% are opposed to vaccination."

Vazrazhdane benefits from this skepticism. "Almost 70% of Bulgarians also oppose the green vaccination passport," Ganev explains. "The campaign against the vaccination passport enabled Vazrazhdane to enter parliament." The Euroskeptic, pro-Kremlin party was founded in 2014, but until recently it never managed to clear the 4% hurdle. The overwhelming majority of polls conducted before the election in November 2021 failed to predict its entry into parliament. 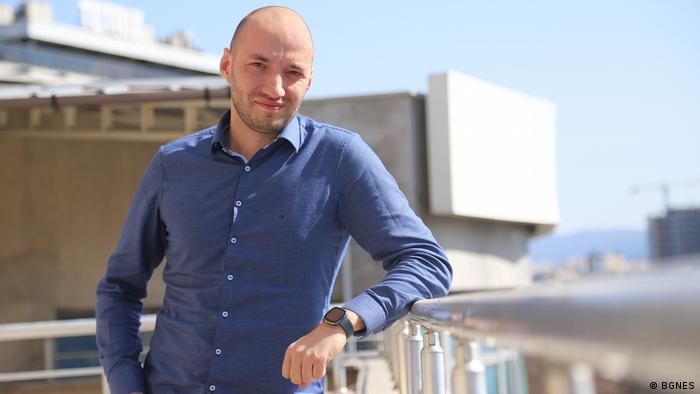 During the protests on January 12, Vazrazhdane delegates tried to open the doors of parliament to let the anti-vaccine demonstrators in. Yet, just a few days earlier, journalistic research revealed that a third of Vazrazhdane's delegates were, in fact, vaccinated. The leader of the party, Kostadin Kostadinov, has repeatedly described the vaccine as an "experimental liquid." Now he's backpedaling, issuing a qualifying statement to say that he supports freedom of choice on vaccination — including for members of his party.

"There was very vocal skepticism among the Bulgarian public, right from the start of the pandemic and when the first vaccines arrived," says Ganev. He believes that can at least partly be accounted for by historical factors. "As part of the Ottoman Empire, Bulgaria missed out on the Enlightenment in the 18th and 19th centuries. In this country, power was always perceived as something foreign," he explains.

"Historically, we distanced ourselves from the ruling power for a very long time, even under the communist regime." And Ganev says that many people see medicine and science as aspects of that power." 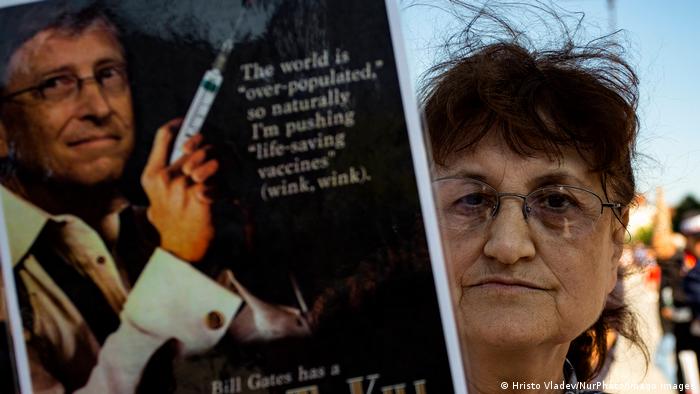 The spread of conspiracy theories has encouraged vaccine skepticism among Bulgarians

Many studies have shown that functional illiteracy is very widespread in Bulgaria," says the mathematician Petar Velkov. "If a person cannot process the available information, he cannot assess the risk. Nor can he assess the risk of vaccine side effects compared with the risk of getting sick with COVID-19." Velkov cites a number of factors: poor education, lack of trust in government, and people — even, in some cases, doctors — spreading conspiracy theories. All of these are fueling Bulgarians' fears, he says.

To take the heat out of the public debate, the new Bulgarian prime minister, Kiril Petkov, has appointed a working group to discuss anti-COVID-19 measures. Representatives from Vazrazhdane were also invited to participate — a decision that has proved controversial among observers in Bulgaria. 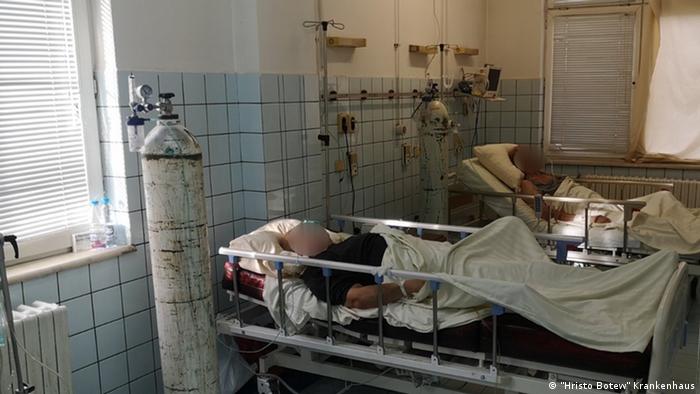 Hospitals are struggling to cope with new admissions

To encourage the elderly population to get vaccinated, the government pays 75 leva (about 38 euros) to every pensioner who has the vaccine. Nonetheless, it seems they are fighting a losing battle.

"Omicron is highly infectious. After the first vaccination, you have to wait 20 days before administering a second. It then takes another 14 days for the person to develop stable immunity and be able to resist the virus. But if omicron is dominant, the number of infected people will double every two to five days," Petar Velkov predicts.

"That means we're likely to see the peak of the wave in early February. So there's no time for any vaccination campaign to have an effect on this wave. A large part of the Bulgarian population will be infected with the virus."