Nasal spray could be the future of the COVID vaccine | Science | In-depth reporting on science and technology | DW | 10.02.2022

Nasal spray could be the future of the COVID vaccine

Would you rather receive a COVID vaccine via needle or nasal spray? Scientists are working to make nasal COVID vaccines a reality. 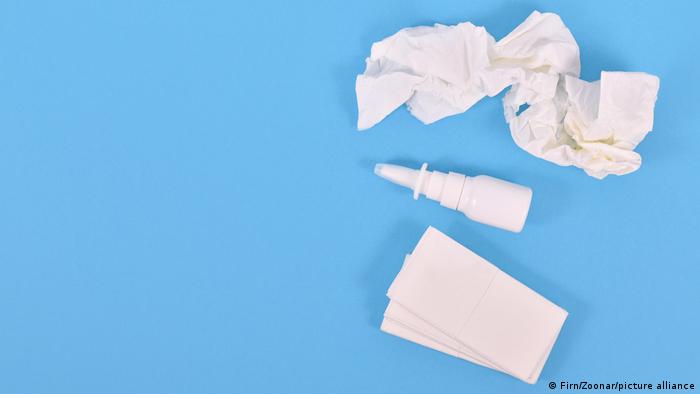 A nasal vaccine for COVID may be on the horizon

When we think about COVID vaccines, most of us picture a pointy needle — and some of us might even faint. But what if getting vaccinated was as easy as inhaling a nasal spray?

The World Health Organization (WHO) estimates that more than 16 billion injections are given annually around the world. That number is set to grow this year — the global vaccination campaign against COVID could require an additional 5.6 billion.

Scientists are currently working on alternatives to meet the high demand, including nasal vaccines.

When a vaccine is given via the nose, the host produces a mucosal immune response at the site of infection.

In Mexico, scientists are working on a nasal vaccine called Patria — meaning "homeland" in Spanish — and hope to get clinical trials started soon.

Peter Palese, chairman of the Department of Microbiology at the Ichan School of Medicine at Mount Sinai Hospital in the United States, developed the key ingredient being used in the nasal vaccine with his research team.

Speaking on DW's Covid-19 Special TV program, Palese said one of the major advantages of the nasal vaccine is its ability to be stored in a normal fridge at 2-4 degrees Celsius, rather than the ultra-low temperatures required for the Pfizer and Moderna vaccines.

Because the vaccine is grown in chicken eggs — the same technology used for many flu vaccines all over the world — the cost of development is also cheaper.

"It is much, much cheaper to produce this vaccine as compared to the mRNA vaccines by Pfizer and Moderna," Palese told DW.

Phase one and two trials are currently being facilitated in parallel due to the urgency of the pandemic. People from five countries are involved in the trials and initial data is expected by July.

"It works beautifully in animals, we have fantastic, compelling studies in hamsters and mice, but obviously mice and hamsters are not humans," said Palese.

Scientists at Washington University in St. Louis are also working on a nasal COVID vaccine.

To make the vaccine, the researchers inserted the SARS-CoV-2 spike protein inside an adenovirus, which causes the common cold. But they altered the adenovirus so it was unable to cause the illness. This allows the body to develop an immune defense to the spike protein.

"It's also important that a single dose produced such a robust immune response," said Curial in a press release. "Vaccines that require two doses for full protection are less effective because some people, for various reasons, never receive the second dose," he added.

Since the vaccine contains no live virus, it would also be a good option for people whose immune systems are compromised by illnesses such as cancer, HIV and diabetes, the scientists said.

The idea might sound novel, but needle-free vaccines have been around for decades.

The first to have  a major impact was the oral polio vaccine, which is still used in low-income countries. The vaccine contains a weakened version of the poliovirus and works by infecting the gastrointestinal tract and provoking an immune response in the host.

There are also oral vaccines for typhoid fever, cholera and rotavirus, as well as a nasal vaccine for influenza. These also contain weakened forms of the pathogen that causes the disease.