Coronavirus digest: US gives final vaccine clearance for children 5 to 11

The CDC has given the green light for around 28 million children to receive the BioNtech-Pfizer coronavirus vaccine. Meanwhile, the WHO has approved a vaccine made in India for emergency use. DW has the latest. 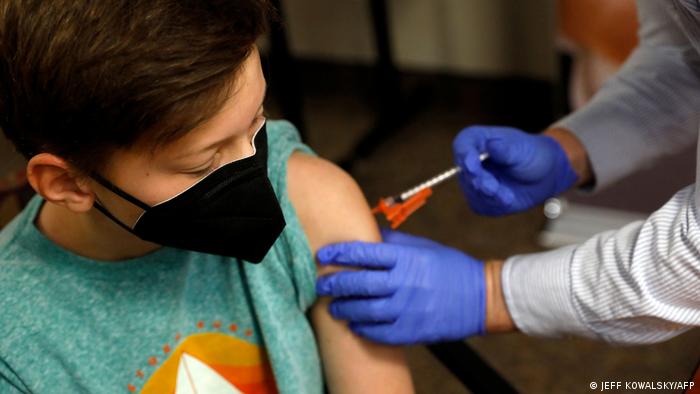 At some point next week, the program should be fully operational, President Biden said

The United States has given final clearance for children aged 5 to 11 to start receiving the BioNtech-Pfizer COVID vaccine.

The Centers for Disease Control and Prevention (CDC) Director Rochelle Walensky said in a statement: "We know millions of parents are eager to get their children vaccinated and with this decision, we now have recommended that about 28 million children receive a COVID-19 vaccine."

Walensky noted in a meeting that pediatric hospitalization surged in the US during the recent wave driven by the so-called Delta variant of the coronavirus, and said the risk from the disease is "too high and too devastating for our children."

The risk from COVID was far greater than other diseases for which children are generally vaccinated, she added.

US President Joe Biden called the decision "a turning point" and a "major step forward" for the nation. He said in statement that it would allow parents to "end months of anxious worrying about their kids, and reduce the extent to which children give the virus to others."

He added that the program for children would ramp up over the coming days and would be in full swing some time next week.

COVID-19 Special: Is it safe to vaccinate children?

Pfizer has already began shipping millions of shots to various states, doctors' offices, and pharmacies — they're packaged in orange caps to avoid mix-ups with purple-capped vials of adult vaccines.

The US has fully vaccinated 58% of the population, lagging behind several other countries like the UK and France in its efforts. Only a few other countries, like China, Cuba and the United Arab Emirates have cleared vaccines for children in this particular age group and younger.

The World Health Organization granted an emergency use license on Wednesday to a coronavirus vaccine developed in India.

The UN health agency said in a statement that it had authorized Covaxin, made by India's Bharat Biotech. The approval makes Covaxin the eighth COVID-19 vaccine to get the nod from the WHO. The agency said the vaccine was found to be about 78% effective in preventing severe COVID-19 and was "extremely suitable'' for poor countries due to its much easier storage requirements.

Chinese President Xi Jinping did not attend the UN Climate Conference COP 26 . He is not known to have left China since the onset of the pandemic at the beginning of 2020.

Hong Kong said on Wednesday that it was planning a major booster campaign as its vaccination rate lags far behind other parts of East Asia. Some 85% of city residents over 80 are not fully vaccinated.

The government of South Korea announced that it would ramp up testing at schools amid a surge in cases among children. The country's schools are set to open for in-person learning in a matter of weeks. Officials said teens clustering together at tutoring academies and social events was partly driving the high infection rate.

Russian President Vladimir Putin was also notable for his absence in Glasgow and though he did not give a reason for his lack of attendance, Russia is struggling with a dire COVID situation, as the death toll rose to a record high of 1,189 on Wednesday amid a surge in cases that has forced officials to impose a nationwide workplace shutdown.

Moscow will end its partial lockdown on November 7, Mayor Sergei Sobyanin said on Wednesday. The capital city entered the lockdown last week, as the rest of the country braced for new restrictions over the virus, as infections hit a record high. The Kremlin blames a widespread reluctance to vaccinate. Despite widespread access to Russia's Sputnik V for most of the year, just over a third of the country is fully vaccinated.

German carrier Lufthansa reported its first profit since the pandemic began on Wednesday. The company brought in €17 million ($19.7 million) in profit in the third quarter of the year as coronavirus-related restrictions eased and travelers took to the skies again.

The German state of Bavaria has decided to reintroduce rules requiring masks in its schools, amid evidence of a rising incidence of the coronavirus.

The measure will come into force when students return from the autumn holidays, and will be imposed for one week in primary schools and for two weeks in schools for older children. A similar measure was lifted at the start of October.

"From November 8, the obligation to wear masks during lessons and at the so-called meeting points in school building will apply, although not in the open air," Culture Minister Michael Piazolo said. Medical masks are required for older pupils, while simple masks will suffice for primary school pupils.

German officials have warned of an impending fourth wave of the pandemic. Current levels of infection and hospitalization linked to the virus prompted concern from German Health Minister Jens Spahn on Wednesday, as parts of the country began tightening controls again.

"The pandemic is by no means over," he said in Berlin, referring to a rise in the number of patients in intensive care units in certain regions. In addition to a mask requirement in Bavarian schools, the government of the state of Hesse also set up new testing requirements for people visiting facilities like hospitals or elderly care homes.

Meanwhile, Lothar Wieler, president of the Robert Koch Institute (RKI), the official disease control body, warned of a fresh wave of cases in the pandemic.

"If we do not act, this fourth wave will again bring a great deal of suffering. Many people will fall seriously ill and die, and the health services will be under extreme pressure again," Wieler said in Berlin. Germany has recorded over 4.65 million cases and 96,000 deaths since the start of the pandemic.

The nation of Georgia threw out 17,000 doses of the AstraZeneca vaccine because they expired this week, causing health officials to sound the alarm over the slow pace of vaccinations. The country saw record numbers of daily cases this week, with 6,024 new infections on Wednesday, and has recorded a total of 733,000 cases with over 10,000 deaths.

Hundreds of people blocked traffic in the center of the Ukrainian capital of Kyiv in a protest against virus restrictions and mandatory vaccinations. Ukraine has registered record high rates of new cases and deaths in recent weeks, and its total number of infections has reached nearly 3 million with 69,447 deaths. Vaccines have become mandatory for some state workers, and in "red" zone areas including Kyiv, only vaccinated people or those with negative COVID test results are allowed into restaurants, gyms and on public transport.

The Netherlands is retightening its coronavirus prevention measures in light of climbing case numbers and hospital admissions. Meanwhile, countries in Asia are again allowing travel. Follow DW for the latest.

The state of Brandenburg will introduce new testing rules for nursing homes after a recent deadly coronavirus outbreak. Half of the employees were found to be unvaccinated.

India's vaccination drive was stalled earlier this year by dose shortages amid a devastating COVID outbreak. Production and supply have vastly improved, but the majority of adults have still not been fully vaccinated.