The Netherlands is retightening its coronavirus prevention measures in light of climbing case numbers and hospital admissions. Meanwhile, countries in Asia are again allowing travel. Follow DW for the latest. 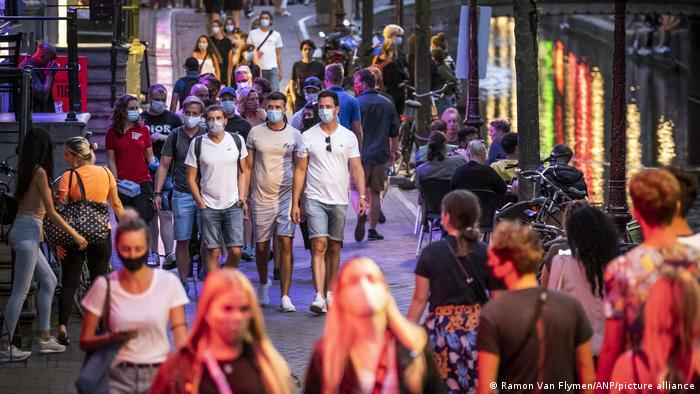 Some of the old rules are back in the Netherlands, amid rising case rates

Dutch Prime Minister Mark Rutte said on Tuesday evening that some COVID measures would be reintroduced as the Netherlands' infection and hospitalization rates rise.

People will have to wear masks in public places such as shops, hairdressers, libraries, government buildings, train stations and hospitals.

In addition, they have also been told — where possible — to stay 1.5 meters (5 feet) away from others.

The country lifted many measures and abolished the 1.5-meter rule about a month and a half ago, and the number of infections has climbed since.

Rutte appealed to citizens to abide by the new rules. "Everything depends on our own behavior," he said, raising the Netherlands' coronavirus risk assessment to the highest level — "Serious."

In the past week, the number of infections had risen by 39% compared to the previous week, and 50% more COVID patients have been admitted to hospitals — a level not seen since mid-May.

Germany has reported 10,813 new cases and 81 deaths over the past 24 hours, according to the latest date from the Robert Koch Institute, the country's public health body. The seven-day incidence in the country stood at 153.7 cases per 100,000 people per week.

China's hopes of playing their upcoming home World Cup qualifiers against Oman and Australia in front of their own fans have been dashed after the matches were moved to Sharjah in the United Arab Emirates due to travel restrictions.

China will play matches against Oman and Australia on November 11 and 16, respectively, according to Xinhua news agency. The Chinese team will depart for Sharjah on November 7, the news agency reported. Qatar will host World Cup 2022 between November and December next year.

Several Asia-Pacific countries that closed their borders last year to curb the spread of coronavirus have selectively begun opening their countries to overseas vaccinated travelers.

Still, all countries require people arriving at the airports to take a COVID test, and produce a negative report, before entering the country.

Thailand, for example, opened to fully vaccinated tourists from more than 60 countries in November after running a limited quarantine-free travel program on the island of Phuket.

Similarly, Singapore began quarantine-free travel for people from several countries like the United States, the United Kingdom, Germany and South Korea from September. However, only 4,000 people in total are allowed to enter the country per day.

The city-state also opens borders to Australians arriving from the states of New South Wales and Victoria from November 21.

Japan's government plans to shorten quarantine periods for inbound travelers from 10 days to 3, according to NHK news agency. The national broadcaster reported that the easing may begin as early as November 8. Japan dropped its state of emergency after recording low COVID numbers in October.

On November 1, Australia began allowing fully vaccinated citizens to fly internationally without taking any special permission for the first time since March 2020. Those arriving in New South Wales, home to Sydney, and Victoria, home to Melbourne, do not need to quarantine. Other states have quarantine restrictions.

Australia's biggest city, Sydney, will lift more COVID rules for vaccinated residents as early as next week, almost a month ahead of schedule. This would mean that vaccinated people will be able to welcome as many guests as they'd like in their homes from November 8. Pubs and clubs will also be able to accommodate more people, in changes that were initially planned to come into force on December 1.

In contrast, unvaccinated people will remain under tougher restrictions until December 15, or until the time New South Wales state's double vaccination rate reaches 95%.

Fiji announced that it will open to fully vaccinated tourists from several countries, including Australia, New Zealand and the US, who have confirmed three-night bookings at approved resorts, from December 1.

Visitors must take a COVID test at their resort 48 hours after arrival. Before the test, tourists can use some hotel facilities and book some day trips with operators.

Brazil registered 98 new COVID deaths on Monday, the lowest daily number since April 2020. It also reported 3,838 cases of COVID, according to the country's health ministry.

Brazil has reported 607,922 deaths due coronavirus, the world's second-highest tally in gross terms behind the United States.

While it took just over a year for the global COVID death toll to hit 2.5 million, the next 2.5 million deaths were recorded over the past eight months as the highly contagious delta variant spread around the world.

Europe's citizens are paying for their leaders' late reaction to the coronavirus outbreak with their personal freedom. Their governments could have learned from Singapore, writes Christina zur Nedden.