A top Australian leader has condemned recent anti-lockdown demonstrations in Sydney. Elsewhere, Brazilians have protested against their president's handling of the pandemic. Follow DW for the latest. 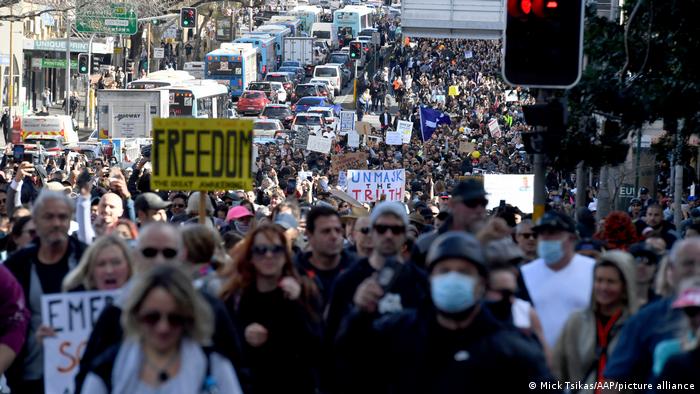 Gladys Berejiklian, the premier of Australia's most populous state of New South Wales, said Sunday she was "disgusted" by recent massive anti-lockdown protests in Sydney.

"In relation to yesterday's protests, can I say how absolutely disgusted I was? It broke my heart," Berejiklian told reporters. "I hope it won't be a setback, but it could be."

Thousands protested against coronavirus restrictions in Sydney and Melbourne on Saturday, with some marchers clashing with police. The protesters were breaking rules on nonessential travel and public gatherings.

Police in Sydney said 57 people were arrested during the demonstrations, with Melbourne officers having arrested six.

New South Wales has seen a spike in infections due to the highly contagious delta variant. The state recorded 141 new cases on Sunday.

Sydney, which is the capital of the state, has been under a strict lockdown for about four weeks. Residents are only allowed to leave their homes for essential reasons, such as shopping for food or going to a medical appointment. The current lockdown is expected to be extended beyond July 30.

Berejiklian has called on residents in the state to get vaccinated in order to stop the spread of infection.

Here's a look at the latest coronavirus news in other parts of the world:

Algeria will reimpose restrictions on gatherings, as of Monday, to curb a rapid spread of the delta variant.

The measures, which will apply to 35 out of Algeria's 58 provinces, include closing gyms, cultural centers, leisure venues, beaches and used car markets, as well as a curfew between 8 p.m. and 6 a.m, a statement from the prime minister's office said.

In addition, all types of gatherings, including weddings, will be banned in the North African country.

The delta variant has accounted for 71% of all infections in July, according to the state research center Pasteur Institute.

President Cyril Ramaphosa said South Africa had "largely" passed the peak of its third wave and, as a result, eased restrictions, including a ban on alcohol sales.

South Africa returned to a partial lockdown last month to stem a surge in cases widely attributed to the delta variant.

Ramaphosa said the average number of daily new infections was now around 12,000, a 20% reduction on last week's numbers.

"The latest figures suggest that we have largely passed the peak of the third wave of infections, although there are areas in the country where we still need to be concerned," the president said in an address to the nation.

Anthony Fauci, the top public health official in the United States, said on Sunday that Americans who are immune-compromised may end up needing COVID-19 vaccine booster shots.

"Those who are transplant patients, cancer chemotherapy, auto-immune diseases, that are on immunosuppressant regimens, those are the kind of individuals that if there's going to be a third booster, which might likely happen, would be among first the vulnerable," he told CNN in an interview.

Thousands of demonstrators took to the streets across Brazil on Saturday to condemn President Jair Bolsonaro's management of the pandemic.

The Brazilian leader has downplayed the virus and opposed restrictions to combat the spread of infection. Over 500,000 people have died from the coronavirus in Brazil, the second-highest toll behind the US.

Bolsonaro is currently being investigated for corruption in regards to the purchase of an Indian coronavirus vaccine.

Chancellor Angela Merkel's top aide has warned that unvaccinated people will have fewer freedoms than those who have decided to get the jab.

The onset of a fourth wave of the virus "would not be without consequences," Helge Braun, the outgoing leader's chief of staff, told the Bild am Sonntag newspaper.

Protesters took to the streets in France, Italy and Greece on Saturday against the introduction of health passes and mandatory vaccination policies by their governments.

Japan’s Mount Fuji has reopened to hikers after a year of being off-limits due to the coronavirus. The active volcano was closed to the public last summer.

The International Olympic Committee said masks remain mandatory at Tokyo medal ceremonies after swimmers were seen removing their masks and hugging other competitors at the medal podium.

"It's not a nice to have. It's a must to have," said IOC spokesman Mark Adams, in response to questions about swimmers without masks. Masks are mandatory for all athletes, staff and media across Olympic venues.

Indonesia is expanding its intensive care unit capacities in areas that have been hard-hit by the virus. The country reported a record-high daily figure of 1,566 new coronavirus deaths on Friday.

The news prompted President Joko Widodo to extended COVID-19 restrictions by a week to August 2 to try to curb infections.

He said the government would gradually adjust some restrictions on "some activities," while allowing traditional markets and restaurants with outdoor areas to open, with some limitations.

Some businesses, from salons and laundries to vehicle repair shops, are now allowed to open.

Vietnam is expecting more COVID vaccines from the United States after the initial 5 million doses sent by Washington. The Southeast Asian country is currently struggling to control outbreaks linked to the delta variant of the virus.

"The US side has said it is also considering more vaccine donations to Vietnam soon," the country's ambassador to the US, Ha Kim Ngoc, said in an address posted on a government website.

On Sunday, Vietnam received 3 million doses of the Moderna vaccine from US through the COVAX program, in addition to the 2 million sent earlier.