The German Hotels and Restaurants Association has criticized new rules requiring a negative test or booster shots for diners. Meanwhile, South Africa is urging its citizens to get vaccinated. Follow DW for the latest. The German Hotel and Restaurant Association (DEHOGA) has labeled the German government's new restrictions on restaurants and pubs a "disaster."

"The introduction of 2G-plus access rules across the board is a disaster for many businesses," the association's chief executive, Ingrid Hartges, told the watson news website.

Hartges said less than half the country's population has received a booster shot, and noted that testing facilities had limited opening hours. This could negatively impact businesses which rely on walk-in customers.

She urged the government to make assistance available for businesses which have been harmed by the restrictions.

On Friday, Chancellor Olaf Scholz and leaders of the country's 16 states agreed on a raft of new rules and restrictions.

Customers will now need to provide a negative COVID test or proof of a booster shot to enter dining areas.

Thousands of people protested against the new measures in several German cities on Saturday.

In Hamburg, some 13,700 people attended a demonstration against the restrictions, police said.

Under the banner, "Stop the corona dictatorship," 4,000 protested in Düsseldorf.

Around 5,000 people rallied in Frankfurt, according to the police. 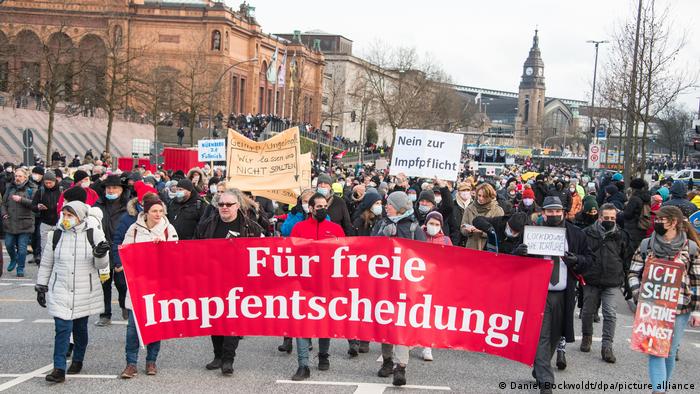 Protesters in a demonstration against COVID restrictions in Hamburg with a banner that reads, "For free vaccination decisions!"

Meanwhile, around 2,500 people turned out in the town of Minden in western Germany in a counter-demonstration, the dpa news agency reported. The rally was in opposition to the "Querdenken" (lateral thinkers) group, which has taken a lead role in organizing protests against the government's policies.

Here are the latest coronavirus-related developments from other parts of the world:

On Saturday, the former prime minister of Australia, Malcolm Turnbull, announced he had tested positive for COVID-19. The news came as record high case numbers were recorded across the country.

"Like hundreds of thousands of other Australians I have tested positive for COVID. Symptoms moderate so far. Isolating is required," Turnbull wrote in a Twitter post.

The former leader also said the pandemic was placing a particular strain on health care professionals and asked Australians to "please be polite and considerate."

The state of New South Wales recorded 45,098 new cases on Saturday, an increase from the 38,625 recorded a day earlier.

The state of Victoria recorded 51,356 new cases on Saturday, more than double the number from the previous day.

Djokovic in limbo ahead of Australian Open

The authority on infectious diseases in Germany has reported a spike in the number of new COVID-19 infections recorded in a 24-hour period.

The Robert Koch Institute said there had been 55,889 new infections, more than double the 26,392 recorded a week previously.

According to the numbers released on Saturday, 268 deaths were recorded within a 24-hour period. A week before there had been 184 deaths recorded in the same time period.

There have been a total of 113,900 deaths since the start of the pandemic.

In Austria, around 40,000 protesters demonstrated in Vienna against COVID measures, including a planned vaccine mandate for the general public.

Police said the demonstrations were largely peaceful. But some were arrested as protesters tried to break through the police barriers, according to the police.

Over 1,000 police were deployed at the protest.

Protesters also demonstrated against COVID policies in France, with a turnout of over 100,000 people across the country.

In Paris alone, 18,000 took to the streets, according to French media citing officials.

Earlier this week, French President Emmanuel Macron sparked controversy with his remarks about the people who have refused the vaccine, saying he intended to make life difficult for the unvaccinated.

A vaccine pass, to be debated in the French Senate next week, is set to exclude unvaccinated individuals from places such as restaurants, cinemas, theaters, museums and sports arenas.

Vaccination will also be required to access inter-regional trains, buses and domestic flights.

More than 150,000 people have died in the United Kingdom after catching coronavirus, the British government said on Saturday.

The UK is one of the most affected countries in Europe, second only to Russia, which has a reported death toll of almost 315,000.

A fourth wave is currently sweeping through the country and placing the health sector under strain.

The Philippines on Saturday reported a record number of new daily COVID-19 infections.

The country's health department reported 26,458 COVID-19 cases, making it the highest daily toll recorded over a 24-hour period since the start of the global pandemic. There were 265 deaths, bringing the total number to 52,135.

The department has cautioned people against complacency and said minimum health protocols should be followed, like wearing of face masks, social distancing and hand-washing.

China reported 165 confirmed coronavirus cases for January 8, its health authority said on Sunday. This was a slight increase over the previous day, when 159 cases were reported.

Most of the new local cases were in the central Henan and Shaanxi provinces. Mainland China had 103,619 confirmed cases as of January 8.

Health authorities in the United States have noticed that hospital admissions of children under the age of 5 with COVID-19 have significantly increased over the past few weeks. That particular age group is considered not yet eligible for vaccination.

Rochelle Walensky, the director of the Centers for Disease Control and Prevention, said overall "pediatric hospitalizations are at their highest rate compared to any prior point in the pandemic.''

Walensky pointed out that the trend highlighted the need for older children and adults to get their shots in order to protect those around them.

Mexico has registered more than 300,000 COVID-19 deaths, making it the fifth country in the world to pass the grim milestone.

The were 131 new deaths recorded on Friday which brought the death toll to 300,101 since the start of the pandemic.

The US, Brazil, India and Russia are all countries that have recorded more deaths.

Around 56% of Mexico's population of 126 million people has been vaccinated.

President Cyril Ramaphosa of South Africa has urged more people to get vaccinated and has called on his ruling African National Congress party to help tackle vaccine hesitancy.

"We can do better as South Africans, so I therefore urge all of us who have not yet been vaccinated, let us go out in our great numbers [and get the vaccine]," Ramaphosa said at a political event.

Just under 40% of the country's population has been fully vaccinated, and the pace of inoculations has slowed in recent weeks

How do you identify virus variants?

Preliminary data from the United Kingdom has shown that patients infected with the omicron variant of COVID-19 are 50% to 70% less likely to end up in the hospital, in comparison with previous delta variant.