As thousands of mostly COVID-deniers prepared to rally this weekend, regional courts have ordered the protests in Dresden and Kempten to be canceled. 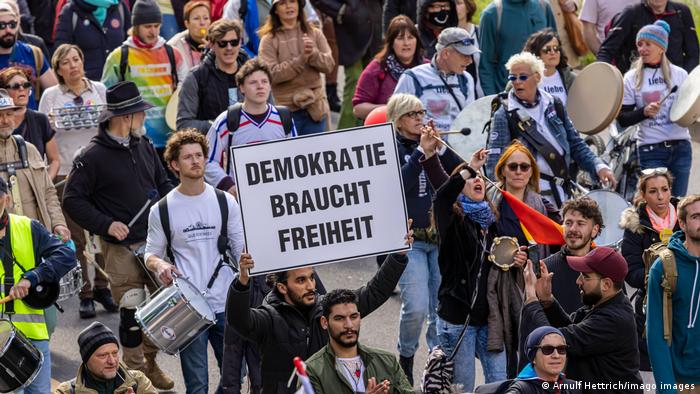 Members of the 'Querdenker' movement march in Stuttgart

Regional German courts have imposed bans on "Querdenker," or "lateral thinking" demonstrations that were due to take place this weekend against coronavirus curbs.

Gatherings were planned in both Dresden and the Bavarian city of Kempten this weekend, which prompted legal proceedings and court rulings on Friday evening.

Bavaria's Administrative Court agreed with the local authority that a ban on gatherings by groups of mostly COVID-deniers was necessary to prevent the risk of infection. The Querdenker movement, which opposes Germany's current lockdown measures, initially planned an 8,000-strong demonstration and a subsequent march with 2,000 people.

The founder of the initiative, Michael Ballweg, was also expected to participate in the Kempten protest.

Meanwhile, the Saxony Higher Administrative Court, which presides over the city of Dresden, said that there was justifiable danger for the participants and passers-by, particularly because of the above-average infection rate and the spread of more infectious virus variants.

Additionally, the court said that limiting the number of participants would not be effective.

The ruling said the organizers would not be able to maintain social distancing and safety measures.

The decision is unappealable and any other planned events are also prohibited.

Dresden also banned a rally by supporters of the far-right Alternative for Germany (AfD) party, which logged 500 participants.

Despite the bans, police are still preparing for some demos to take place anyway.

The Querdenker group has hosted several anti-lockdown rallies in recent months, with one demonstration in Leipzig attracting over 20,000 participants from around the region in November.

German Justice Minister Christine Lambrecht has called on police to take a hardline against coronavirus demonstrations.

A "crystal-clear red line must be drawn," Lambrecht told the Funke Mediengruppe.

"In addition to criminal prosecution, demonstrations must be broken up by the police," she said, calling the behavior of some protesters "absolutely unacceptable."

"We cannot expect people to be very restrictive in their private lives while at the same time others are flouting all the rules at coronavirus demonstrations," she said.

She referred, among other things, to threats issued against scientists and politicians, and violent attacks on journalists.

In December of last year, Berlin placed parts of the movement under surveillance, after it was deemed to be "infiltrated by extremists."

Germany is currently grappling with a third coronavirus wave, and is recording a higher number of daily infections than in past months.

On Saturday, health authorities reported 23,804 new infections and 219 deaths, while the number of new infections per 100,000 inhabitants has risen to 160.7 nationwide.