Under the new law, foreigners are required to undergo medical tests for infectious diseases including COVID-19, HIV, and tuberculosis. But Russia's health ministry seemed to be walking parts of the changes back. 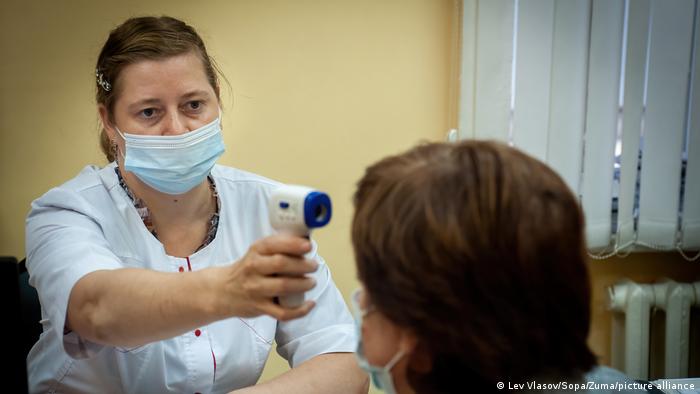 Foreigners who plan to stay in the country long-term must undergo medical procedures within a 90-day period, while migrant workers have 30 days from their date of entry, according to an article posted on the official website of the Russian parliament.

Exams include those for COVID-19, HIV, syphilis, tuberculosis, leprosy, and drug addiction. Blood tests, X-rays or CT scans could also be required for some. Health results must then be sent to Russian immigration authorities.

"If these requirements are avoided, the period of stay in Russia will be reduced," the statement reads.

The legal changes prompted outrage abroad. The new legislation would impact hundreds and thousands of migrant workers — crucial to the Russian economy — as well as international business organizations.

What changed after the outrage?

Initials reports also indicated that the health checkup would need to be repeated every three months, because the official health certificate would only be valid for that long. This week, however, Russia's Health Ministry said this was a misunderstanding.

The deadline "in no way means that it would be needed to undergo medical examinations once every three months," the ministry said. Instead, it means the certificate will need to be submitted to Russian authorities within that period.

The ministry pledged to clarify the order, but has yet to provide more details.

Foreigners present in Russia for more than three months must pass a series of medical exams and obtain a certificate from certified health organizations confirming "the absence of infectious diseases that pose a danger to others, as well as drug addiction," the statement said.

Anyone who refuses to comply risks having their work permits revoked.

The only people exempt from the new regulations are diplomats, citizens of Belarus and children under six.

Russia's Foreign Ministry also said it would seek "favorable conditions" for foreign members of the media and their families.

It was not immediately clear if foreigners would have to leave the country or face other consequences if tests showed they were ill.

It was also unclear how health exams will be organized safely during the coronavirus pandemic.

Why is the law controversial?

The new legislation has renewed fears over Moscow's growing expansion of surveillance and data collection.

Russian authorities, however, argue that the new health procedures will benefit the well-being of the population.

A number of foreign business operations in Russia have objected to the new law, including the American Chamber of Commerce and the Association of European Businesses.

The German-Russian Chamber of Commerce (AHK) warned that there could be consequences for the Russian economy if the new rules are implemented consistently.

The body sent a letter to the Russian government earlier in December, calling on Moscow to weaken the rules.

"Foreign managers important to Russia could turn away from Russia on a large scale," the AHK said.