Vaccines from both drugmakers have been approved in the EU for children from 12 to 17 years of age. Elsewhere, Australia continues its battle against the delta variant. Follow DW for the latest. 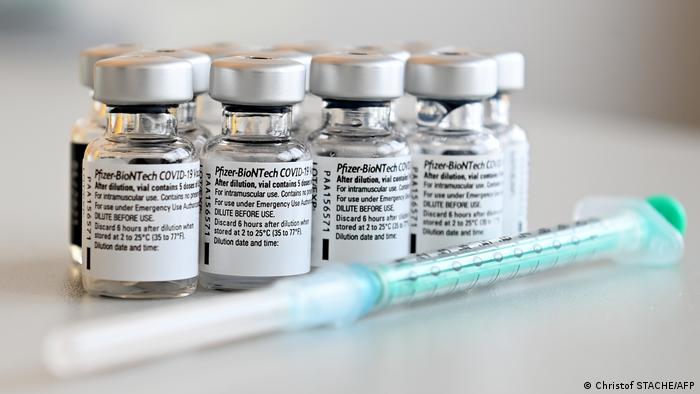 Pfizer and Moderna have increased the prices of their vaccines in their latest European Union supply contracts, the Financial Times newspaper reported.

The European Medicines Agency (EMA), the EU's medicines watchdog, said last Friday that the bloc was likely to get 40 million more Moderna vaccine doses by October.

The European Commission said last week that the EU was on course to fully vaccinate at least 70% of its adult population by the end of the summer.

Overall, 57% of people over 18 are now fully vaccinated across 27 nations, Commission Chief Ursula von der Leyen said in a statement. She warned that people could not let their guard down since the "very dangerous" delta variant was still a threat.

Here are the major developments on coronavirus from around the world.

Fully vaccinated tourists from the EU and US do not have to quarantine upon entering the United Kingdom. Previously, the UK required vaccinated people to isolate for 10 days upon arrival.

Britain's health ministry said England will update its COVID-19 exposure notification app so that fewer individuals exposed to asymptomatic individuals who test positive for the coronavirus will need to self-isolate.

After business leaders expressed concern about the number of people required to self-isolate after exposure to an individual who tests positive, the proposed change will alter the days before possible exposure to contacts from two days prior to the positive test, down from the previous five days

The German government is reportedly laying the groundwork to roll out a booster shot for more vulnerable people, such as the elderly, according to the Bild newspaper.

The German government has condemned violence at a Sunday protest in Berlin organized by the Querdenken ("Lateral Thinking") movement over the government's measures to mitigate the spread of COVID-19. Berlin police initiated 503 preliminary proceedings against those involved.

Sixty police officers were injured, some seriously, as well as one journalist. Joerg Reichel, the head of the Berlin branch of the journalists' union was pulled from his bike and beaten according to Berlin daily Tagesspiegel.

The public prosecutor said a 48-year-old protester who had died in custody after being detained Sunday died of a heart attack.

French President Emmanuel Macron shared a homemade video Monday filmed from his vacation in the south of France offering to answer citizens' questions about vaccines using social media platforms Instagram and TikTok. He added vaccines are "the only weapon" against a fourth wave of infections.

Australia's Queensland extended a lockdown in its southern region until next Sunday afternoon, state health authorities said. The news comes after the state reported 13 new locally acquired cases, which brings the total number of cases to 31. The city of Brisbane and nearby Gold Coast are among areas affected.

New South Wales, where Sydney is located, reported 207 locally acquired new cases of COVID-19, down from 239 a day earlier. At least 51 of those who were newly detected with the infection spent time in the community while infectious, state Premier Gladys Berejiklian said.

Mainland China has reported 98 new cases, compared with 75 a day earlier, according to the National Health Commission. This brings the total official number of cases to 93,103, with the death toll unchanged at 4,636.

Tokyo recorded 2,195 new COVID cases on Monday, the government announced. Olympics organizers said they recorded 17 new cases linked to the Games in their update on the COVID situation on Monday.

Malaysia recorded its highest daily number of deaths due to COVID-19 on Monday, raising the number of fatalities during the pandemic by 219.

Iran recorded more than 37,000 new coronavirus cases Monday, the largest daily increase in the country during the pandemic.

The United Arab Emirates will begin rolling out China's Sinopharm vaccines to children between 3 and 17 years of age, the government said on Monday. It said the decision came after extensive trials without providing any other details.

Starting Tuesday, Morocco will have a curfew from 9 p.m. until 5 a.m. to mitigate the spread of the coronavirus. The new measure lengthens the existing curfew by two hours.

Morocco has registered anywhere from 4,000 to 9,000 daily new cases over the course of the last week.

Mexico reported 6,740 new cases of COVID and 128 more fatalities on August 1, bringing its total to 2,854,992 infections and 241,034 deaths since the onset of the pandemic. The government said the real number of cases is likely higher, with one separate study putting the death toll at least 60% above that reported.

A Republican report released on Monday claimed that evidence proves the virus that causes COVID-19 came from a Chinese research facility. US intelligence agencies have yet to conclude their investigation into the lab leak theory.

Schools in Henry County, Georgia in the US southeast will pay staff at schools a $1,000 (€842) bonus if they are vaccinated against COVID-19 by September 30. The payment money will come from a federal program to curtail infections in elementary and secondary schools.

Venezuela will receive 6.2 million doses in the coming days through the COVAX program, President Nicolas Maduro said. Maduro had previously given COVAX an "ultimatum" to send the doses or return the money it paid.

Two months of declining COVID cases in Europe have come to an end, according to the World Health Organization. Meanwhile, Germany lifted travel restrictions for more than 80 countries. Follow DW for the latest.

The southern US state has become the new national epicenter for the virus, accounting for around a fifth of all new cases. Australia too is battling a rising number of cases despite lockdowns. Follow DW for more.