Two months of declining COVID cases in Europe have come to an end, according to the World Health Organization. Meanwhile, Germany lifted travel restrictions for more than 80 countries. Follow DW for the latest. 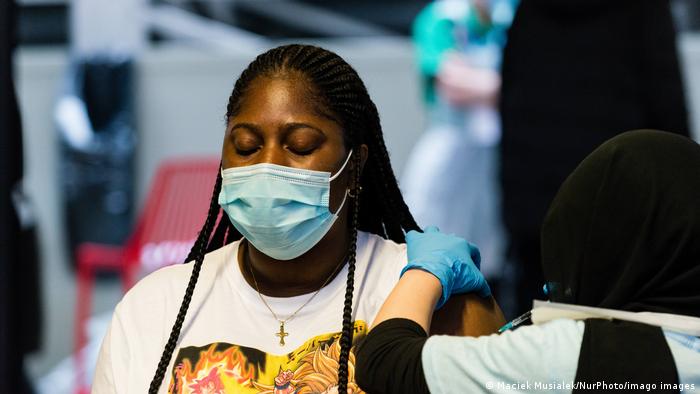 Coronavirus cases in the WHO's Europe region are on the rise again, including from the UK to Russia

The World Health Organization (WHO) on Thursday said new COVID cases were again rising in Europe, after more than two months of declining numbers.

"Last week, the number of cases rose by 10%, driven by increased mixing, travel, gatherings and easing of social restrictions," Hans Kluge, the WHO's regional director for Europe told a press conference.

Kluge said the increase in cases could be attributed to the fast-spreading delta variant, warning that it could become the dominant variant in Europe by August.

The EU's disease control agency, the ECDC, also recently estimated that the delta variant could account for 90% of new cases in the EU by the end of August.

Although vaccination campaigns have picked up recently in Europe, Kluge warned that the vaccine rollout in the WHO's European region was nowhere near where it needs to be to provide enough protection.

"There will be a new wave in the WHO European region unless we remain disciplined," he added.

The director said the average vaccine coverage in the WHO's European region was only 24%. The region includes 53 countries and territories, including several countries in Central Asia.

Here's a rundown of other major coronavirus developments around the world.

In a controversial move, Germany lifted its travel warnings for more than 80 countries and will no longer advise people against traveling abroad, starting on Thursday. These include popular tourist destinations such as Spain, Croatia, and Turkey, among others.

Under the new guidelines, travel warnings will apply only for countries where new variants are spreading rapidly, or places with an incidence rate of 200 cases per 100,000 people over a week. A survey by research institute YouGov showed that 48% of Germans were against the move, whereas 38% supported it.

How dangerous is the COVID-19 delta variant in Germany?

Starting Thursday, the European Union's COVID travel certificate came into force. The document, which functions with a QR code, shows whether a person has received a jab, recovered from the virus, or recently tested negative.

The roll-out comes in time for the EU's summer travel season. But the fast-spreading delta variant could possibly trigger a brake in its usage.

Marco Cavaleri, the EMA head of vaccine strategy, told a news conference the finding is based on "emerging data and real-world evidence."

Most of the 181 Spanish high school students who had tested negative for coronavirus have been allowed to leave enforced quarantine on the Spanish island of Mallorca. Fifty-one students tested positive for the virus, and remain in quarantine.

They had been ordered into quarantine after a total of around 1,700 COVID cases of the were reported throughout Spain after groups of final-year students went on school trips to the Mediterranean island.

Many of the students had protested the 10-day quarantine on social media and with banners on the balconies of their hotel rooms.

Thailand had a record number of 57 deaths for the second day in a row on Thursday, as the country tries to contain a third wave of coronavirus infections. The country also kicked off a program to review tourism to the island of Phuket, which has seen fewer cases than the mainland.

Vaccinated foreign tourists will now be allowed to move around without quarantine on the island. After 14 days, they will be allowed to travel around the rest of the country.

On Friday, Indonesia will launch a measure of strict curbs to control its worst wave, after reporting record daily cases in the past weeks. The curbs, which include restrictions on movement and air travel, a ban on dining in restaurants and closing of non-essential offices will last until July 20.

A strict lockdown was imposed in Bangladesh as the army and police have been deployed to enforce it. The nation has been seeing a huge spike in cases, mainly due to the delta variant first found in India.

Most offices and shops will be shut, and only some local food markets will be allowed to stay open for a few hours a day. "We are hopeful these tough measures will work. We have to contain the virus at any cost," a health official told the AFP news agency.

Health authorities revealed that Mexico's death toll is likely 60% higher than the official count. Data showed the country registered 351,376 excess deaths from the start of the pandemic until May this year.

The additional deaths recorded by the Health Ministry are based on a search of death certificates, which showed a 58.5% increase over that period compared to before the pandemic.

The Pan American Health Organization (PAHO) said Wednesday that cases in Latin America and the Caribbean were rising, even as North America was seeing a decline in numbers.

The vaccination rates in the region are very low, with only one in 10 having been inoculated. "While we are seeing some reprieve from the virus in countries in the northern hemisphere, for most countries in our region, the end remains a distant future," said PAHO director Carissa Etienne.

German biopharmaceutical company CureVac's coronavirus vaccine, known as CVnCoV, was found to be 48% effective across all age groups, said a final study data on Wednesday. The number is far lower than those developed by mRNA rivals BioNTech-Pfizer and Moderna.

The company said "the unprecedented context of 15 strains circulating" was partly responsible for the low efficacy. The vaccine is 53% effective against severe illness in 18 to 60-year-olds, and 77% effective against moderate and severe disease progression.

Scientists believe the underwhelming results may be down to the lower dosage, or even CureVac's formula, which unlike its rivals uses an unmodified form of messenger RNA.

Germany is in a strict lockdown. Travel has not been banned entirely, but an appeal issued to refrain from non-essential trips. The borders remain open. Here's what you need to know about Germany's entry regulations.