Peru has more than 2.1 million confirmed cases of COVID-19

Classified as a "variant of interest" by the World Health Organization (WHO) on June 17, the lambda, or C.37, variant of the coronavirus has already been detected in some US states and at least 29 nations — many of them in Latin America.

In Peru, where it was identified in August 2020, the lambda variant accounted for more than 80% of new infections in June, and it is also spreading rapidly in Chile, Argentina, Brazil, Colombia, Ecuador and Mexico.

"So far we have seen no indication that the lambda variant is more aggressive," WHO virologist Jairo Mendez-Rico told DW. "It is possible that it may exhibit higher infection rates, but we don't yet have enough reliable data to compare it to gamma or delta."

Alpha (B.1.1.7), beta (B.1.351) delta (B.1.617.2) and gamma (P.1) are also categorized as "variants of concern" by the WHO. The classification indicates that they are more transmissible and more difficult to treat and can lead to more serious illness.

"Although it is possible, currently there is no indication that variants are more dangerous and lead to increased mortality," said Mendez-Rico. "It is likely that SARS-CoV-2 will become more transmissible throughout the course of its evolution but not necessarily more damaging."

Many scientists believe that the coronavirus pandemic won't be over until at least 80% of the world's population has been vaccinated. Variants like lambda could continue to emerge until that is achieved.

Mendez-Rico said inoculation presented the most effective defense. "All of the vaccines we have approved worldwide have been generally effective against circulating coronavirus variants, and there is no reason to suspect them to be less so against lambda," he said.

The virologist Pablo Tsukayama and his team at Lima's Cayetano Heredia University have traced the evolution of the lambda variant in Peru for months after identifying it through genome testing. Lambda spread more quickly than variants deemed far more dangerous by the WHO out of the way, even prevailing over the gamma variant, which had run rampant in neighboring Brazil.

"We had 200 lambda infections in December," said Tsukayama. "By the end of March, it made up half of all samples taken in Lima. [In June, it was] more than 80% of all infections nationwide. Lambda has become the dominant variant in Peru in a very short period of time."

Tsukayama said lambda was more transmissible, which had helped it spread so quickly in Peru. "With [...] the highest mortality rates in the world, we are the country that has struggled most when it comes to the coronavirus," he said. "Therefore, it is probably no wonder that the new variant has gotten its start here." By the end of July, COVID-19 deaths in Peru had surpassed 195,000.

Latin America — with more than 1.4 million coronavirus deaths already — could become the new epicenter of coronavirus variants. In Colombia, for instance, the highly contagious B.1.621, a variant of interest first detected there in January, is increasingly spreading.

The combination of overwhelmed health care systems, populations working precarious jobs without much opportunity to adhere to safety precautions and a lack of vaccines have proven a perfect breeding ground for the lambda variant. With the exception of Chile and Uruguay, which have vaccinated more than 60% of their citizens, vaccine rollout across Latin America is lagging.

"It is very likely that new variants will appear during a third wave of coronavirus infections during the South American winter between July and September," said Tsukayama. "They may not be any more lethal but they will definitely be more communicable." 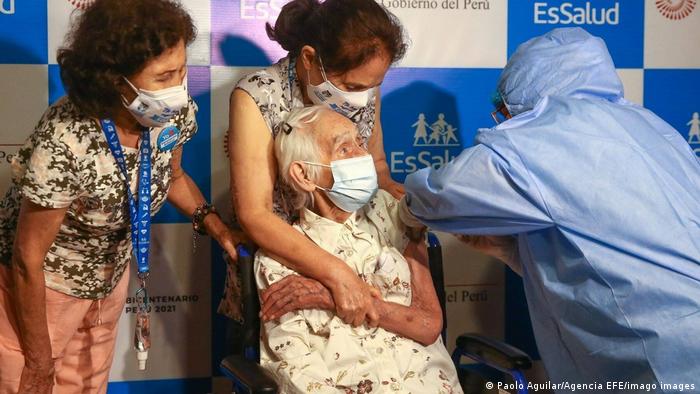 After a COVAX vaccine initiative donor conference in early June, about $9.6 billion (€8 billion) is now available for vaccination campaigns in poorer countries. That means that some 1.8 billion doses of coronavirus vaccine can be distributed to 90 countries by the beginning of next year. That won't end the crisis, but it's a start. The world, it seems, is slowly realizing that the pandemic can only be defeated globally.

"Now the strategy for rich countries must be to quickly transport as many doses of vaccine as possible to poorer countries; otherwise, new variants will continue to pop up," said Tsukayama. "The motto 'no one is safe until everyone is safe' still applies when it comes to the coronavirus."

This is an updated version of a previous article published on June 24, 2021