Chile: Fresh curfews despite vaccination program success | News and current affairs from Germany and around the world | DW | 14.06.2021

Chile is one of the leading countries in the world when it comes to vaccinating its people against COVID-19. But amid record-breaking new infection rates, authorities have reimposed a lockdown in and around the capital. 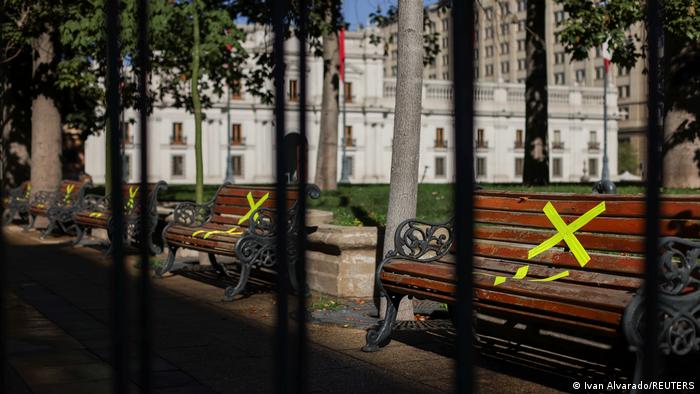 Infection rates are soaring despite the successful vaccination campaign

Since last weekend, the strictest of four lockdown levels has once again come into effect in the metropolitan region of Santiago de Chile.

According to the new measures, only those in systemically important professions may leave the house to go to work; going for a walk or playing sport is allowed only in the morning, and only with others from the same household. People may only go shopping for essential items twice a week, for two hours.

President Sebastian Pinera has appealed to people to follow the rules, and suggested that if they did the new lockdown might be eased in as little as two weeks.

Since mid-April, Chile has been struggling with its highest infection rates since last June. The seven-day incidence fell slightly in May, but for a week now it has been back at record national levels of around 260 new infections per 100,000 inhabitants. The capital and surrounding area, where almost half the population lives, is especially badly affected.

Chile had in fact emerged as Latin America's vaccination champion. Here, of all places, the latest developments came as a surprise. The country has been systematically implementing its ambitious vaccination plan, and almost 9 million of Chile's 20 million people are already fully vaccinated. Another 2.5 million have received the first of two doses.

This means that Chile has achieved 58% of its goal of vaccinating at least three-quarters of the population. Three-quarters is considered enough to reach so-called herd immunity, when major outbreaks of disease become extremely unlikely. If Chile continues to vaccinate at its current speed, it could meet this target sometime in August.

At just under 60%, Israel is the only country in the world with more than 2 million inhabitants to have vaccinated a higher proportion of its population than Chile. In Israel, however, the pandemic is practically over. The seven-day incidence there last Friday was just 1.3 cases per 100,000 people.

There are a number of possible explanations for why the incidence rate in Chile is 200 times higher than in Israel. One may be to do with the vaccination campaign itself. In Israel, almost everyone received the BioNTech-Pfizer vaccine; the remainder had Moderna. Both of these are mRNA vaccines.

In Chile, however, more than three-quarters of the doses administered were the Chinese Sinovac, a so-called "dead," or inactivated, vaccine that can be produced in large quantities relatively fast.

For the two mRNA vaccines, BioNTech-Pfizer and Moderna, studies have shown that they are around 95% effective. But studies on the efficacy of Sinovac produced very different results. In Brazil, this inactivated vaccine only protected around 50% of people against symptomatic illness and severe disease, while in Chile the rate was 63%. Sinovac may be even less effective in terms of actually preventing infection, and this is vital in order to stop the virus from spreading.

The poorer results in these studies could indicate that Sinovac is less effective, especially against the Brazilian gamma variant. This mutation is believed to be twice as infectious as the original virus, and is now the most common variant in Chile as well.

Overall, mortality in Chile is stabilizing at a slightly lower level than in previous months. This suggests that Sinovac does at least mitigate the most serious effects of the disease. Nonetheless, intensive care units in the Santiago metropolitan area are almost at capacity again.

Experts in Chile believe people's behavior is another contributing factor. Marcela Garrido, an intensive care doctor and head of epidemiology at the hospital of the Universidad de los Andes in Santiago de Chile, told the Chilean daily La Tercera that after months of going back and forth between harsher and milder restrictions, people are simply fed up.

"People are losing respect for the measures, and are no longer staying at home," she said. "There are both economic and psychological reasons for this." 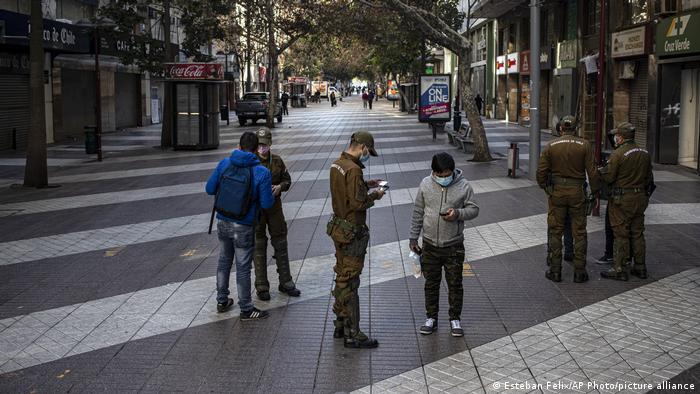 In Chile, far fewer people are able to work from home than in Europe, or indeed in Israel. The government is aware of this. At the end of last week, Pinera announced further aid for small and medium-sized enterprises that are struggling because of the restrictions.

But even in Chile, which is prosperous by Latin American standards, many people work without a proper employment contract. Lidia Amarales, a health expert from the Universidad de Magallanes in Punta Arenas, told La Tercera that financial pressure is forcing many people to leave the house, contrary to instructions.

"I'm not in favor of blaming these people," she said, commenting that they should have been given a better explanation of why isolation was necessary, as well as rules that were as simple and comprehensible as possible. "That has been neglected all through the pandemic."

Experts also believe that people may feel they are safe because of the high vaccination rate, and that this could be another reason why infection rates are rising so sharply now. With the coronavirus, as with many viruses that are absorbed through the respiratory tract, time of year is also a factor. Winter is just setting in in Chile — and it was in June 2020 that the country experienced its first major wave of COVID-19.