Coronavirus: WHO approves Sinovac COVID vaccine for emergency use

It is the second China-developed vaccine to be approved by the international body. It can now be used in the COVAX program for low-income countries. 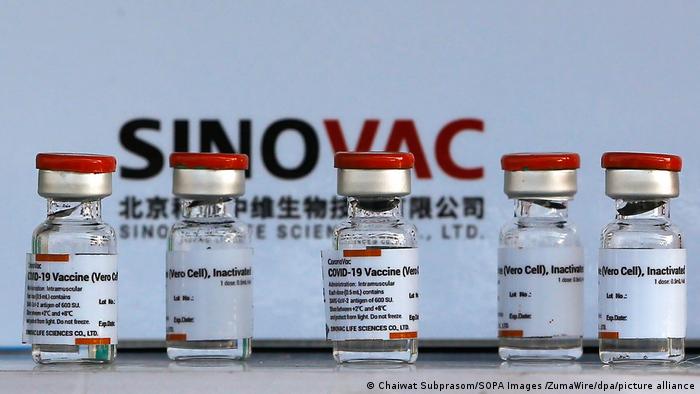 Sinovac is the sixth vaccine approved by the WHO

The World Health Organization said Tuesday that it approved the COVID-19 vaccine from Sinovac Biotech for emergency use.

It is the second Chinese vaccine to make the list, after the shot from Sinopharm was approved in April. The WHO approved list includes vaccines developed by BioNTech-Pfizer, Moderna, AstraZeneca and Johnson & Johnson.

The announcement allows the two-dose vaccine to be used as part of the COVAX program, which provides vaccines to many low-income nations. Only the AstraZeneca and BioNTech-Pfizer jabs are currently going through the COVAX scheme.

There is no currently confirmed deal for Sinovac doses to be used under the COVAX program.

'Huge inequality across the globe'

She added: "We urge manufacturers to participate in the COVAX facility, share their know-how and data and contribute to bringing the pandemic under control."

WHO Director-General Tedros Adhanom Ghebreyesus said the vaccine was safe and effective, and its easy storage requirements made it suitable for harsh climates.

"It's now crucial to get these lifesaving tools to the people that need them quickly," said Ghebreyesus.

The jab's efficacy has varied widely in different trials. The WHO's separate Strategic Advisory Group of Experts (SAGE) showed the vaccine efficacy in phase III trials ranged from 51% to 84%. The WHO said the shot prevented severe COVID-19 and hospitalization in 100% of the tested population.

Indonesia said last month that its study of 120,000 healthcare workers who received the vaccine showed it was 94% effective at preventing symptomatic illness.

Sinovac said that it has supplied more than 600 million doses in China and abroad by the end of May, and over 430 million of those doses have been administered. The vaccine is already in use in 22 countries around the world, according to AFP news agency, including Brazil, Indonesia, and Turkey.

Brazil's "Project S," which tested Sinovac's shot in real world conditions in the Brazilian town of Serrana, dramatically reduced the number of COVID-19 cases in the town. After 75% of the population received both doses in four months, deaths fell by 95%, hospitalizations fell 86%, and symptomatic cases dropped 80% in the town.

"WHO recommends the vaccine for use in adults 18 years and older, in a two-dose schedule with a spacing of two to four weeks," said the WHO in a statement.

The organization said that because there were few people over 60 in the trials, they could not estimate how well it would perform on the elderly population.

"Nevertheless, WHO is not recommending an upper age limit for the vaccine," said the WHO, adding that data from the shot's use in other countries "suggest the vaccine is likely to have a protective effect in older persons."

Germany's health minister, Jens Spahn, is in South Africa as part of an initiative to assist vaccine production on the continent. But improving manufacturing capacity is still a long journey.

Indonesia's top Islamic body has given religious approval to China's Sinovac vaccine just days before the country is set to start its inoculation programme.