Indonesia has decided to prioritize vaccination for people aged 18-59, arguing the workforce needs to be protected first to boost the economy. 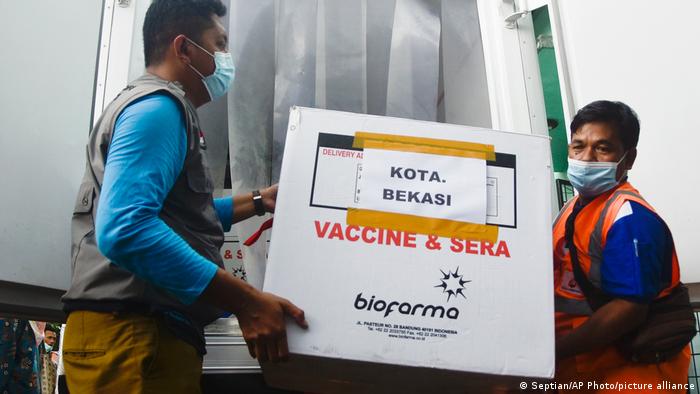 Young and healthy people across the world might have to wait until summer 2021, or even into 2022, to receive a COVID vaccine. However, in Indonesia, the government plans to put people aged from 18-59 years old near the front of the line for shots.

The first two phases of Indonesia's vaccination campaign started on January 13 and are expected to run concurrently until April, according to the Health Ministry. The first shots will go to health workers and support staff.

This will be followed by members of the public workforce, including public servants at ports and stations, electric companies, banks, water companies and any officials providing community services.

People in the 18-59 age group comprise the majority of the workforce. Individuals above 60 years old will be next in line for shots.

China's Sinovac vaccine makes up the majority of Indonesia's supply. The country aims to vaccinate around 181 million people to achieve herd immunity.

Indonesia is one of the hardest-hit countries in Southeast Asia. Authorities have recorded more than 939,000 COVID infections since March 2020 with over 27,000 deaths.

Some countries, such as Germany and the UK, gave vaccination priority to the elderly, as older people are at higher risk for severe COVID complications.

Indonesia's argument of vaccinating younger people before the elderly is that the country's economic recovery will rely heavily on its workforce in the 18-59 cohort.

Indonesia's economy was severely hit by the pandemic. With many people losing their jobs, the country has fallen into a recession for the first time in two decades.

To get the economy moving again, officials say the younger workforce should have priority over the elderly.

Siti Nadia Tarmizi, a spokesperson for Indonesian Ministry of Health's COVID vaccination program, told DW that along with being vital to the economy, the younger age group also has Indonesia's highest infection rate, although adding that the group's mortality rate is quite low.

"We know that this group plays an important role in economic activities that support families. They move the economy, and therefore we give priority to those aged 18-59 years," said Tarmizi.

She added that vaccinating young people could "break the chain of transmission in the family cluster," and therefore reduce overall infection rates.

Indonesia's first vaccine shot was given to President Joko Widodo (Jokowi). However, pop stars and social media influencers also received a shot ahead of the health care workers as stipulated in the Health Ministry plan, which triggered criticism.

However, Dicky Budiman, an epidemiologist and researcher at Griffith University in Australia, told DW that there is "no positive correlation" between vaccinating pop stars and raising public willingness to vaccinate.

He added that vaccinating people like the president and governors, as well as health care professionals, will have a greater effect on the public.

"If they [artists and influencers] really have an impact, it would be very easy to solve problems like spreading hoaxes and conspiracy theories by asking celebrities to inform the public," said Budiman.

"In reality it is not effective ... they do not have any influence when it comes to the vaccine. It might even be counterproductive," Budiman said in an interview with DW.